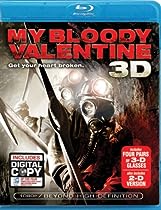 There seem to be an exceptionally large number of DVD releases in the genres of science fiction, fantasy, and horror this week, but that is mostly because several old discs are being reissued as part of a promotion for the upcoming theatrical release of LAND OF THE LOST. If you’re a horror fan looking for something new, your best bet is MY BLOODY VALENTINE, which arrives in four different versions: Blu-ray, 3-D DVD, 2-D DVD, and a 3-D/2-D combo DVD. We personally were not expecting much of anything from the film when it was released earlier this year, but it turned out to be better than expected; in fact, it far outclassed the year’s more high-profile slasher remake, FRIDAY THE 13TH by a wide margin. The 3-D presentation of the theatrical feature has been preserved – something previously beyond the reach of home video, at least with any satisfactory results, and we can’t wait to see how this turned out. As for bonus features, the DVDs offer audio commentary by director Patrick Lussier and writer Todd Farmer, two featurettes, deleted scenes, an alternate ending, a gag reel, a digital copy, and four pairs of 3-D glasses (only with the disc in 3-D, of course). The Blu-ray disc includes all of these plus Lionsgate Live and McLog Motion Blog.

With TERMINATOR SALVATION on the way, it was inevitable that Hollywood would reach into the vaults and come up with some new home video releases. This week, we get TERMINATOR 2 JUDGMENT DAYin three iterations: an “Extreme DVD” version, a “Skynet Edition” on Blu-ray, and a six-disc limited edition Complete Collector’s Set with Endoskull. We will be posting a review of the Blu-ray disc in the near future.

NIGHTMARE CASTLEis a black-and-white Italian horror film from the 1960s, starring Queen of Horror Barbara Steele. It is not one of Steele’s better outings, but it gives her a better chance to act, thanks to a double role that has her playing two sisters, one good and one evil (as an extra added bonus, the evil one is dead!). This is also one of her few Italian roles that has her dubbing her own voice (for only one sister, unfortunately). Steele fans will be interested, as will fans of composer Ennio Morricone, who provided the score. This new DVD promises a restored transfer from the original negative (older discs, under the title of “The Faceless Monster,” were duped from censored TV prints). There are also two bonus featurettes: one for Steele and one for director Mario Caiano.
Also making a reapparance on DVD is DEF BY TEMPTATION, an above average Troma offering that avoids the usual camp in favor of a serious approach to a tale of a demon tempting a young divinity student. The reason for this exhumation seems to be that the film features an early appearance by Samuel Jackson, whose name is now prominently displayed on the box art above the title.
There are at least eight old science fiction, fantasy, and horror titles being reissued with “Land of the Lost Movie Cash” (which allows you to purchase tickets for LAND OF THE LOST, which opens in June. If you don’t already own the LEGEND Ultimate Edition DVD, the JAWS 30th Anniversary DVD, the TREMORS Collector’s Edition DVD, the Brendan Fraser MUMMY Collectors DVD, or the director’s cut of BROTHER HOOD OF THE WOLF, now is your chance to pick them up and get a little something extra.
Other oldies making a comeback include A BUG’S LIFEon Blu-ray and a director’s cut of THE LAST HORROR FILM(reteaming MANIAC’s Joe Spinnella and Caroline Munro) on DVD – although why anyone would want such a thing is a mystery to me.

The complete first season of HBO’s popular vampire series, TRUE BLOOD arrives on DVD and Blu-ray. Other television titles this week include HEROES: SEASON 1 and 2 and BATTLESTAR GALACTICA: SEASON 2.0 AND 2.5.
A few direct-to-video titles hits shelves: