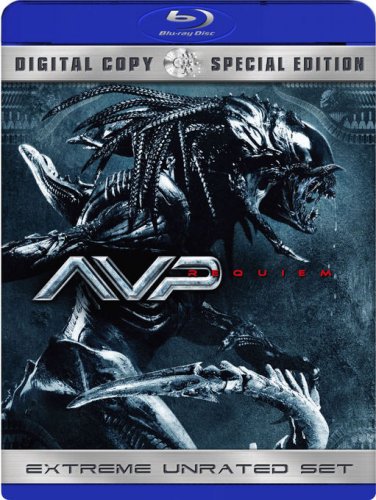 This is an odd week for sci-fi films on home video. There are many discs being released, but it seems as if most of them feature the same title. Perhaps the only people rejoicing will be fans of the ALIEN VS. PREDATOR franchise (are there such people?), because ALIENS VS PREDATOR: REQUIEM arrives in six – count ’em, six – different permutations: There is a standard DVD and of course an unrated edition (don’t leave home without it, gore-hounds). There is a two-disc special edition with an option that allows you to make a digital copy onto your computer. There is a Blu-ray disc that contains both the R-rated and unrated versions. And you can also get the film double-billed with the first ALIENS VS PREDATORS film, on DVD and on Blu-ray. As if that were not enough, Fox is cashing in on the interest generated by this franchise-hybrid by releasing a PREDATOR tripl feature DVD box set, an ALIEN Triple Pack DVD, and a Blu-ray disc of the original PREDATOR. To top it all off, Fox, perhaps sensing that there were not enough discs with the world “Alien” in the title coming out this week, has thoughtfully put out a 3-Disc DVD set called ALIEN NATION -ULTIMATE MOVIE COLLECTION – which has nothing to do with the ALIEN franchise, but your careless friends, looking to purchase your birthday present, may be fooled. One suspects that the combined effect of this onslaught will do more damage to your wallet than any of these monsters ever achieved on screen.
For a film that was barely worth the celluloid on which it was printed, ALIENS VS. PREDATOR receives the high-class treatment on Blu-ray disc, which is loaded with supplemental features:

It’s hard to imagine why anyone would want to sit through extensive supplemental features about a film that’s so mechanical and uninspired as AVP:R. One suspects this is an instance where the DVD and Blu-ray discs are no substitute for some good, old-fashioned journalism (a la The Devil’s Candy) that would take us behind the scenes and show us where things went wrong.
The only other hot new horror release is the French gore-fest INSIDE, which lit up the Internets with enthusiastic reviews from people who should know better. It’s not a terrible film, just a terribly disappointing one, which squanders its best elements beneath a geyser of blood. I have to admit that directors Alexandre Bustillo & Julien Maury seem to know what they’re doing; I just don’t trust their judgment.
One final note: Box office blockbuster and Best Picture nominee JUNO arrives on home video today. Although emphatically not a horror film, there are some pop culture references that pertain to the horror genre, including dialogue about Dario Argento and a brief gory clip from the creaky old schlock epic THE WIZARD OF GORE.
RELATED ARTICLES: