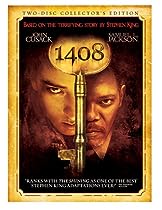 Today brings us the home video release of 1408, the tale of a writer (John Cusack) spending an evening in a haunted hotel room. Based on a story by Stephen King, the film inevitably invites comparisons to THE SHINING; although no match for Kubrick’s classic, 1408 does a more than servicable job of scaring the audience. Besides the Full Screen DVD and the Widescreen DVD, there is also a two-disc collector’s edition, which contains both the theatrical cut and an extended director’s cut, with an alternate ending. In addition to a couple of bonus features that will be on the single-disc DVDs, the collector’s edition also includes five deleted scenes, a behind-the-scenes look at the film, and audio commentary by director Mikael Hafstrom and writers Scott Alexander and Larry Karaszewski. Read about this week’s other DVD releases below the fold.

The other new title hitting shelves this week is THE OTHER SIDE, a low-budget action-fantasy-horror film whose virtues I’ve been extolling since it screened at the Shriekfest film festival last year. The film is currently playing on one screen in Hollywood – a platform release to generate some publicity for the DVD – but for most viewers this will essentially be a direct-to-video release. This disc includes several bonus features that should be of interest not only to those who enjoyed the film but to aspiring filmmakers interested in how to achieve a lot with very little:

The rest of this week’s releases consist mostly of DTV titles and oldies being re-issued, either in collector’s editions on in new formats. HALLOWEEN (1978), DAWN OF THE DEAD (1979), DAY OF THE DEAD (1985), EVIL DEAD 2 (1987), THE DAY AFTER TOMORROW (2004), and BRAM STOKER’S DRACULA (1992) arrive on Blu-ray disc; the latter film also gets the Collector’s Edition DVD treatment. MISERYreturns on a Collector’s Edition DVD.  The animated classic THE JUNGLE BOOK – the last film on which Walt Disney personally worked before his death – arrives on a Two-Disc 40th Anniversary Platinum Edition DVD. The 1933 classic THE MOST DANGEROUS GAME suffers the indignity of colorization on its latest DVD release. SPECIES returns on a Collector’s Edition DVD, in conjunction with the DVD release of the direct-to-video sequel, SPECIES IV – THE AWAKENING. Another direct-to-video sequel, PUMPKINHEAD 4 – BLOOD FEUD also arrives on DVD this week. And for the hard-core collector, there is DVD STAR TREK: THE NEXT GENERATION – Complete Series, which lumps together every single episode into one enormous box set – a real steal at a list price of #304.99 (marked down from a list price of $455.95).
You can find these and the week’s other sci-fi, fantasy, and horror film releases below.