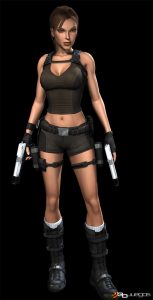 According to The Hollywood Reporter, the new owners of the TOMB RAIDER video game film rights may be planning to do an origin film of the Lara Croft character.
The two TOMB RAIDER feature films starred Angelina Jolie as the mature version of the female Indiana Jones-type archeologist-adventurer.
However, new rights holder GK Films, headed by Graham King (THE TOURIST), apparently wants to “create daring new adventures for the young and dynamic Lara Croft.”
Original game delveloper Eidos, now part of the Square Enix group, also seems intents on making a new game that explores Corft’s origins, via its active game company Crystal Dynamics.

No script ot writer is in place as of yet.