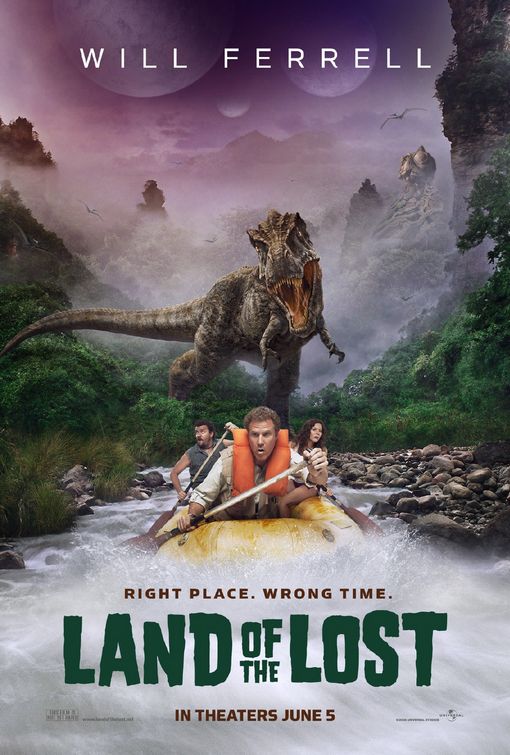 The big-budget feature film version of LAND OF THE LOST turns out to be an amiable summer popcorn movie, enlivened with eye-popping production design, impressive make-up and special effects, enthusiastic performances, and a handful of good jokes. Unfortunately, the best moments are all on view in the various trailers and film clips available on the Internet, which makes the experience of watching the complete film somewhat disappointing. It’s not bad, but for a film that seems to have been constructed simply to string together a series of laugh-out-loud comedy set-pieces, the results are oddly muted, mostly mild chuckles dispersed at discrete intervals. Without a strong story to engage the audience, LAND OF THE LOST winds up feeling disjointed and episodic, but at least it is so eager to please that you wind up wanting to like it perhaps a bit more than you actually do.
The basic premise is ripe for classic comedy: Will Ferrell plays a discredited scientist who builds a machine that warps him into another dimension where past, present, and future co-exist, and faced with numerous dangers, he inevitably makes the wrong decision about everything. Chief among those dangers is Grumpy the Tyrannasaurus Rex with a brain the size of a walnut (but wait till you get a look at the size of walnuts in the Land of the Lost!j).
As long as LAND OF THE LOST sticks to Grumpy, Chaka the ape man, and so forth, it is reasonably amusing. It starts to go astray when a new plot element is introduced: it’s not enough that our characters want to get home; they have to save the universe from an evil villain. Ho-hum, where have we heard that before?
Occasionally, director Brad Silberling seems uncertain of what tone to strike. Although LAND OF THE LOST is marketed as a family film, there are a few slightly crude jokes (like having Chaka cop of feel of the leading lady’s breasts). And as if to convince us that this is not just a silly comedy, Silberling gratuitously tosses the severed arm of an ice cream vendor who pops into the Land of the Lost just long enough to be devoured by dinosaurs. If the intent was to convince us that the film’s jeopardy is realy, it fails, coming across like a bad joke.
Ferrell is funny as the pathetic paleontologist. Also good is Danny McBride as someone accidentally roped into the time travel adventure, who offers his ordinary guy reactions to the scientist’s blase acceptance of wild and amazing sights around them. Anna Friel is mostly given the straight woman role (she is even reduced to damsel in distress at the end), while the guys get to do all the funny stuff. Leonard Nimoy provides the voice for one briefly seen Sleestak character.
Judging by the footage seen in trailers and clips that does not show up in the actual film, LAND OF THE LOST was shot with a free-wheeling, improvisatory style. No doubt, much of this footage will show up as deleted scenes on the DVD. Too bad with all that extra footage, the editor couldn’t come up with 100 great minutes for the theatrical version.
UPDATE: I just wanted to add that any film that not only contains the line “Matt Lauer can suck it” – but also makes Matt Lauer himself say it on screen – deserves at least some small measure of appreciation.