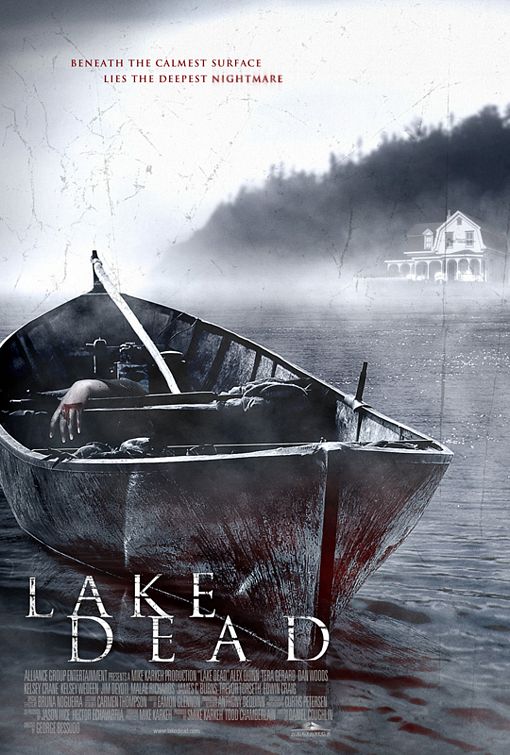 This is another disappointing entry in the 2007 After Dark Horrorfest. Like TOOTH AND NAIL, it feels like a throwback to an earlier era of low-budget exploitation film-making. In this case, we get a group of young people heading to an isolated area for the weekend, but instead of a single silent killer lurking in the woods (a la FRIDAY THE 13TH), we get a pair of them, plus a few other nasty surprises. The plot kicks off with Grandpa (Edwin Craig) being gunned down after bailing out on the family “Tradition” (apparently something rather unsavory). His granddaughter Brielle (Kelsey Crane) receives a letter notifying her that she and her sisters have inherited Grandpa’s motel in the woods. Brielle’s estranged father warns her not to go, but she ignores the advice.  Out in the woods, Brielle’s step-sister and friends are killed and/or raped one by one, but Brielle and her real sister get the hands-off treatment. It turns out that the hulking killers are in cahoots with some more presentable folk, who have other plans for the two sisters…
It does not take high-wattage brain power to deduce why Brielle and her sister are receiving exceptional treatment. The talk of family “purity” clues us in to the motivations of the villains, who want their estranged relatives for incestuous breeding purposes. By the time the wacko mother-and-son duo celebrate their plan with a deep romantic kiss, any potential shock has worn off; viewers are more likely to giggle at having their suspicions confirmed.
Most of the other “surprises” are also telegraphed. As in THE TEXAS CHAINSAW MASSACRE, the characters escape from danger only to run into an allegedly friendly face, a sheriff who turns out to be part of the horror – but the movie has already revealed the sheriff’s involvement in the opening scene. Even without this give-away, his behavior is too obviously suspicious, yet Brielle and company are too stupid to see that they have walked out of the frying pan into the proverbial fire.


That’s pretty much par for the course. Although the characters in LAKE DEAD are supposed to be adults, they act little differently from the stupid horny teenagers who inhabited bad slasher movies back in the 1980s. The introductory scenes, including the weekend road trip, even echoes FRIDAY THE 13TH 3D. The camaraderie, beer-drinking, and bitching along the way are all pretty juvenile, serving little purpose except to bore us with the “character” moments that are supposed to make us like the victims before they are slaughtered. Eventually, one couple even wanders off alone in the woods to have sex and – in the time-honored tradition -get killed immediately afterwards. There is little the cast can do except embody these walking cliches from another era; sadly, the passage of time has made their behavior seem even more incredible.
The director opts for crude brutality, but he evokes more revulsion than actual terror. Working on the theory that THE HILLS HAVE EYES and THE HILLS HAVE EYES 2 were too restrained in their attacks on women, we get not one but two rape scenes for our alleged viewing pleasure. In the first, the victim is pinned to a tree with a pickax through the face. For some reason, we’re expected to believe her wound leaves her alive long enough to experience the sexual assault, but the intended effect backfires, producing laughs of ridicule.
After watching these vile backwoods loonies perpetrating more than their fair share of on-screen atrocities, there is a certain satisfaction in seeing the tables turned for some well-deserved payback near the end. There’s even a clever moment when Brielle’s fiance manages to defeat an opponent while tied to a chair; it’s a scene we’ve watched a million times before, and it’s nice that we see something besides the usual wriggling-the-hands-free routine.
Unfortunately, this heroic action on the part of the male lead seems part and parcel of some rather retro sexual politics. Brielle gets herself and her friends into danger because she refuses to take paternal advice (this is what happens when women think for themselves, apparently). The real mastermind of the backwoods horror is the old family matriarch, who stood fast by the vile family tradition even when Grandpa had second thoughts. (Leaving aside Grandpa’s unexplained change-of-heart, the implication is that no good comes from having a woman running the family.) Not only does LAKE DEAD offer up the old “sex equals death” formula (while deliberately characterizing the first two female victims as sluts or whores); the film also insists on portraying Brielle and her sister as screaming victims from beginning to end. There is not even the climactic “Final Girl” moment when the last intended victim faces off alone against the killer; instead, the male charactes (first the fiance, then – at the very end – the estranged father) have to save the helpless women. Man-power, baby – that’s what it takes!
In a final nod toward outdated movie cliches, LAKE DEAD ends with an epilogue that tells us the horror is not over. Perhaps a sequel is intended, but it is hard to imagine anyone wanting to take a second plunge after wading once through this muddy, murky lake.
LAKE DEAD (2007). Directed by  George Bessudo. Written by Daniel P. Coughlin. Cast: James C. Burns, Kelsey Crane, jim Devoti, Tara Gerard, Pat McNeely, Alex A. Quinn, Malea Richardson, Kelsey Wedeen. Christian Stokes, Trevor Torseth.
[serialposts]