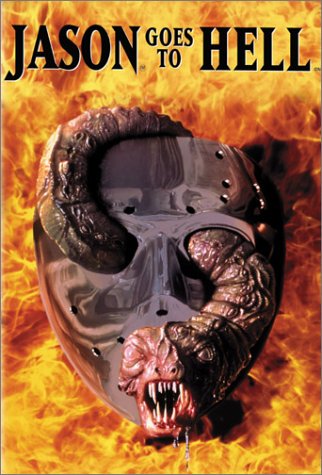 This film is a complete anomaly: the first film in the series not to be titled FRIDY THE 13TH, it radically reinvents the mythology of Jason Voorhees. After the diminishing box office returns since FRIDAY THE 13TH: THE FINAL CHAPTER, and especially after the disappointing FRIDAY THE 13TH PART VIII: JASON TAKES MANHATTAN, it was no doubt necessary to go in a new direction; unfortunately, in this case “new” meant ripping off another popular film, namely THE HIDDEN. In JASON GOES TO HELL, we are no longer dealing with a mere masked maniac or even a resurrected zombie; instead, we learn that Jason is actually merely a vessel carrying a slug-like creature from Hell that can pass from body to body. This opens up possibilities to do something different with the franchise, but the script makes so little effort at synthesizing the new mythology with the previous films that it is might almost as well have been a stand-alone effort. Fans may object that it’s not their idea of a FRIDAY film, but at the end of the day, you have to admit that this is actually a pretty decent movie.
Ignoring the ending of JASON TAKES MANHATTAN, the new film begins with a typical slasher scene: a beautiful woman (Julie Michaels) heads out to Crystal Lake, strips down for a shower, and soon finds herself pursued by the hockey-masked murderer. In a neat twist on expectations, the woman turns out to be an FBI agent leading Jason into a trap, where he is promptly blown to smithereens. This serves a double purpose:

The rest of the film, then, becomes an effort to re-imagine a new version of the threat, one that cannot simply be blown up. Unfortunately, this involves a rather obvious version of the traditional “Johnny Explainer” character: Creighton Duke (Steve Williams), who somehow knows all there is to know about the origins of Jason and conveniently ends up in a jail cell where he can tell it all to our hero, Steven Freeman (John D. LeMay, previously seen in the FRIDAY THE 13TH television series).
As arbitrary and contrived as the new explanation is (it even involves a magic dagger necessary to kill the evil slug), it provides an opportunity to tell a story about a protagonist who knows about the menace and is trying to stop it. In other words, rather like JASON LIVES, this is a FRIDAY film with an honest-to-god old-fashioned dramatic structure involving a hero pursuing a goal, so it is no longer necessary to pad out the running time with lots of irrelevant peripheral characters who simply take off their clothes and die. JASON GOES TO HELL actually exceeds JASON LIVES in this regard, telling an interesting story with likable characters that actually compensates for the fact that the exploitation elements are toned way down.
As hard as it tries, JASON GOES TO HELL still suffers from some typical horror movie cliches, such as the fact that the monster (in whatever body it possess) is able to kill off the supporting characters without breaking a sweat, but when it comes to the final showdown between Steven and the resurrected Jason, it suddenly seems as if an evenly matched pair are fighting it out – what Liz Kingsley at And You Call Yourself a Scientist terms the “Hero’s Death Battle Exemption.”
There is also a lot of supernatural hooey in the dialogue: besides the magical dagger, we also are told that the devil-slug was born in a Voorhees, can be reborn in a Voorhees, and can be killed only by a Voorhees – but why is left up to our imagination (as is the question of how there could be a surviving member of the Voorhees family in the small town near Crystal Lake without anyone knowing about it but outsider Creighton Duke).
Inevitably, there is also some disappointment that the figure of Jason Voorhees (here embodied once again by Kane Hodder, who had played the role since PART VII: THE NEW BLOOD) is given so little screen-time. Hodder’s version of Jason is probably the most memorable one, thanks to some reasonably expressive body language; it’s sad that probably the best film in which he portrayed the character features him the least. As compensation, Hodder gets a brief cameo as a security guard who unwittingly mouths off to the latest body hosting the evil paraside – and pays the price for it.
Although it may not be a “good” FRIDAY THE 13TH movie (by whatever strange standards that is reckoned) or even a very good Jason movie, JASON GOES TO HELL works reasonably well on its own terms as a supernatural thriller. It’s still not very original, but by this late date, ripping off THE HIDDEN was probably preferable to simply setting up another line of victims in a row for Jason to mow down.

This is the first film in the franchise not distributed by Paramount Pictures; instead the honors went to New Line Cinema, home of Freddy Kruger. Prior to this, there had been some talk of Paramount and New Line co-producing a film that would pair up the two characters, but New Line honcho Robert Shaye was reluctant, claiming that he doubted the idea could be developed into something more than a “dumb-hoot” movie. Shaye also wanted any cross-over film to be distributed through New Line, not Paramount – which became a sticking point that prevented negotiations from proceeding. With Jason now ensconced at New Line, these earlier objections became moot, and JASON GOES TO HELL famously ends witha teaser for a cross-over sequel: after Jason is destroyed, Freddy’s famous gloved hand reaches up from beneath the ground to drag Jason’s mask out of sight. In fact, FREDDY VS. JASON would not appear for ten years, thanks to difficulties developing a satisfactory script; in the meantime, JASON X (2002) put Jason into outer space.
After the poor box office of JASON TAKE MANHATTAN, Paramount sold the rights to the Jason character to Sean Cunningham, who had produced and directed the first FRIDAY THE 13TH; however, the studio retained rights to the “Friday the 13th” title (which conseqeuntly did not appear on any of the subsequent sequels). The irony is that Cunningham’s FRIDAY film had featured Mrs. Voorhees as the killer, and Cunningham had no direct involvement with any of the sequels that had turned Jason into a horror icon. Consequently, it should be little surprise that JASON GOES TO HELL does not take a particularly reverential attitude toward Jason.