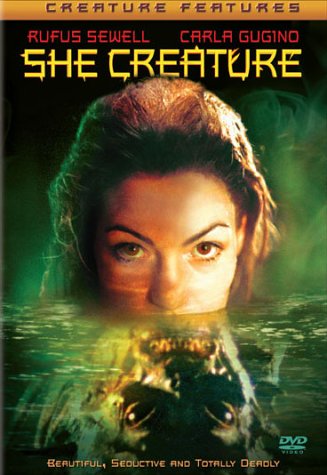 [EDITOR’S NOTE: In memory of Stan Winston, who died this weekend, here is a little interview I conducted with him back in June of 2001 when  he was happily producing a series of modestly budgeted monster movies for cable television.]
In honor of the Halloween season, Cinemax will be bringing you a series of five Creature Features this October: DAY THE WORLD ENDED, TEENAGE CAVEMAN, EARTH VS. THE SPIDER, HOW TO MAKE A MONSTER, and MERMAID CHRONICLES PART 1: SHE CREATURE. The titles may sound familiar, but the stories and characters will be brand new. Each takes its name from one of the low-budget sci-fi flicks turned out by American International Pictures in the 1950s, and uses that as a jumping off point for an original film.
This approach may sound daft, but it is in keeping with the methods employed by AIP when they were making their teen-oriented drive-in fodder decades ago. Typically, company chiefs Samuel Z. Arkoff and (the late) James H. Nicholson would come up with an outrageous title, commission a piece of poster artwork, and then test it with the theatre chains that played their films. If a title drew a positive response, AIP would then create a film to match the titleand sometimes, the finished product didn’t match that closely!
The new made-for-cable films are co-produced by Lou Arkoff (son of Sam) and Stan Winston, whose studio have provided Oscar-worthy makeup and effects for countless Hollywood blockbusters. Winston has been trying to move into film production for several years, having directed PUMKINHEAD (1988), A GNOME NAMED GNORM (1992), and more recently the Michael Jackson short subject GHOSTS (1997).
“Stan Winston Studios has been taking a lot of new directions,” he explains. “I started a production company a few years ago for us to develop stories for us to produce and/or direct. Now the first series of Stan Winston productions is coming out, called Creature Features. Each one introduces a new creature and a new story, using old titles but not the stories.” For example, the 1957 version of EARTH VS. THE SPIDER (typical for its time) dealt with a giant spider that threatened Earth (well, at least a small town located on Earth). The new version deals with a young man whose attempt to become a Spider-Man type superhero goes disastrously wrong, leaving him with a Jekyll-and-Hyde type personality disorder.
For the most part, the modestly budgeted films eschew big-name talent in favor of relying on the high-concept titles to draw viewers. However, some familiar faces will turn up. Clea Duval (soon to be seen in GHOST OF MARS) is in HOW TO MAKE A MONSTER, along with Tyler Mane, who made a memorable impression as Sabretooth in X-MEN. Rufus Sewell (DARK CITY) appears in SHE CREATURE, and Randy Quaid and Nastassja Kinski lend their talents to THE DAY THE WORLD ENDED. The later has received an R-rating from the MPAA, in anticipation of a platform theatrical release.
“There’s a possibility of one initially going theatrical,” explains Winston. Otherwise, the films will air on Cinemax before repeating on HBO. The series begins with EARTH VS. THE SPIDER on October 7, then HOW TO MAKE A MONSTER on October 14, and continues with one film a week; this initial quartet will be aired back-to-back for a Halloween Night marathon. “In November, the fifth one [SHE CREATURE] will be released on HBO, and then all of the movies will be repeated,” Winston adds. “It’s quite an extensive platform of movies to be released on a combination of [Cinemax] and HBO.”
Winston plans to use that platform to help launch his first line of action figures. “I said, ‘You know what? This is the perfect kind of springboard.’ We’ll open up my toy line with the first five characters from Creature Features, which involve the She Creaturethe Queen of the Lair, the Mermaid Beast; the Quentin action figure, which is The Spider from EARTH VS. THE SPIDER; and so on. Great titles, each one with a new creature.” [NOTE: See article link at bottom for more news on the action figure line.]
This is not the first time that old American International films have been given the remake treatment for TV, but the approach here is almost diametrically opposed to that of past efforts. For example in the 1960s, there was a notorious string of 16mm color productions shot for syndication, which threw out the titles but re-used the scripts, creating almost word-for-word remakes (e.g., IT CONQUERED THE WORLD became ZONTAR, THE THING FROM VENUS). With that kind of tradition to uphold, it shouldn’t be hard for Creature Features to surpass the achievements of the past.