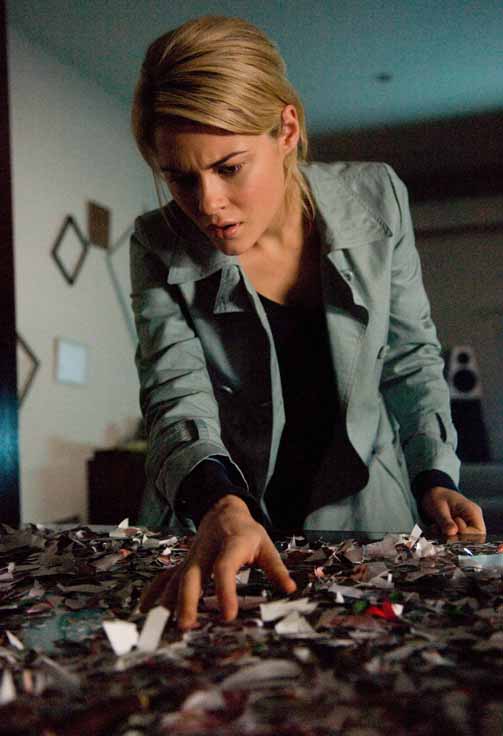 Remaking Asian horror films is a thankless job, but Hollywood keeps on trying. Fans of the originals hate the new versions, and general audiences seem to be losing interest: ONE MISSED CALL and THE EYE, both released earlier this year, made only $26.9-million and $31.0-million, respectively. Hoping to reverse this trend is SHUTTER, starring Joshua Jackson (DAWSON’S CREEK) and Rachael Taylor (TRANSFORMERS), which is based on the excellent 2004 Thai film of the same title, about a young couple haunted by a female ghost that manifests itself in the form of “Spirit Photography.” Rachael Taylor acknowledges that the Thai version of SHUTTER is hard to match; however, she hopes the remake is no mere photo duplicate of the original but rather a new interpretation that brings its own unique focus to the subject.
“I appreciate that remaking a film in the horror genre is a sensitive thing because people become very loyal to the original film,” she says. “Of course they’ve been remade to varying degrees of success in the West, so I wanted to know what I was up against. It turned out I was up against a lot, because it’s a very, very good film. But it was one of the reasons I wanted to do the movie, because I think it’s such an interesting film. It’s not just a horror movie about a haunted house; it’s dealing with some interesting issues in a relationship. So I felt there was enough for me to explore as an actor. Also, the perspective of our film, the American version, is very different from the Thai version – in the sense that it’s more of a male perspective in the Thai film. It’s about him running away from his past and trying to forget his past. The American version is more about the female character trying to unpack his past. So it’s quite different.”
Unlike ghosts in many J-Horror films, who target victims almost at random (because they happened to watch the wrong videotape or walk into the wrong house), the one in SHUTTER has a very specific motivation: trying to get a message across to the land of the living, so that a grievous wrong will be brought to light. When Ben (Jackson), a professional photographer working in Tokyo, is reluctant to believe he has captured a ghost on film, it falls to his new bride Jane (Taylor) to solve the mystery. Taylor hopes this plot line elevates SHUTTER above the run-of-the-mill horror remake. 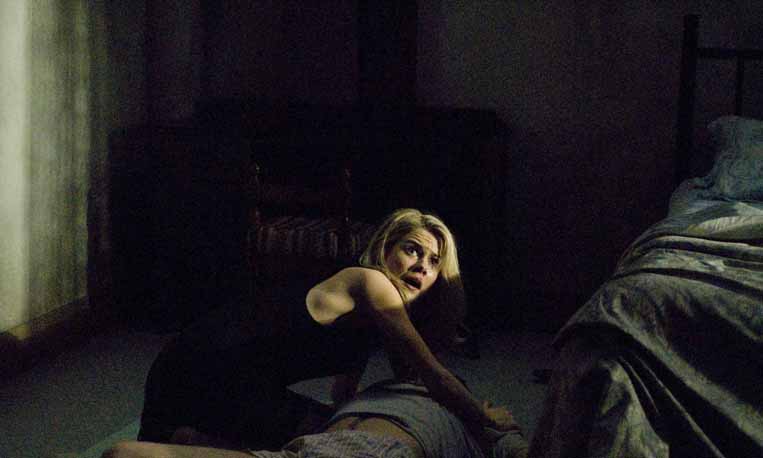 Another difference from the original version of SHUTTER is that the remake goes to greater lengths to explain the phenomenon of spirit photography to a presumably skeptical American audience. Taylor remains agnostic on the subject.
“I was not skeptical about spirit photography, especially because I had very little understanding of what it was before I shot the movie. But in terms of the world of the supernatural, I wasn’t categorically a non-believer, but I wasn’t categorically a believer, either. I saw somewhere in the middle of not being sure. Then I started doing research on spirit photography, and it’s fascinating. It is a true phenomenon, and there are pictures that have these inexplicable images on them. We can’t explain them as a light mark or a water mark or a technical problem or whatever; they’re just these funny images. Do I believe it now? I think I have the same personal thing on it that the film does, which is that if a supernatural, if a spiritual message needs to make itself heard, then it will find a way to do that. I think that’s a fair call to make. Like if something is so emotionally potent that it needs to find a way to surface, then I think absolutely it’s possible. I’m not checking my pictures at this moment to see if there’s a spirit in it, but touch wood anyway.”
No matter how much the new version struggles to be see in its own light, the original is always there, providing an easy comparison. Did awareness of the Thai film ever come back to figuratively haunt Taylor during filming?
“A little bit,” she admits. “You want it to be respectful. It’s a tricky thing to remake someone else’s piece of art, and you’ve got to be sensitive and you’ve got to be respectful, and I hope that we were. I didn’t direct the film, so I can’t be responsible for the whole thing, but you want to be decent about it and not completely butcher it. I don’t think we did.”
Of course, some fans will inevitably feel different, no matter how good the intentions of the remake. Taylor has already caught a glimpse of the fan reaction to SHUTTER.
“You only make the mistake once or twice of going online and Googling yourself,” she laughs. “Then you never have to do it again. I think the responses to this movie are either really, really positive and they adore it and they’re like ‘it’s a kick-ass female horror movie and we love it,’ or they’re like ‘the original was better” because they have that allegiance to the original film. I think that’s a really great response, if people are in any way split or divided. Mostly what I’ve seen, people have been positive about it. But I think any response is a good response, and these are passionate people, the horror-movie fan-boys. I think that they get involved with film in that way is really cool. I’m never personally offended by it. There’s this one website called ‘The Bastardly’ or something, and it’s so mean, but like I said, I won’t look at it again.” 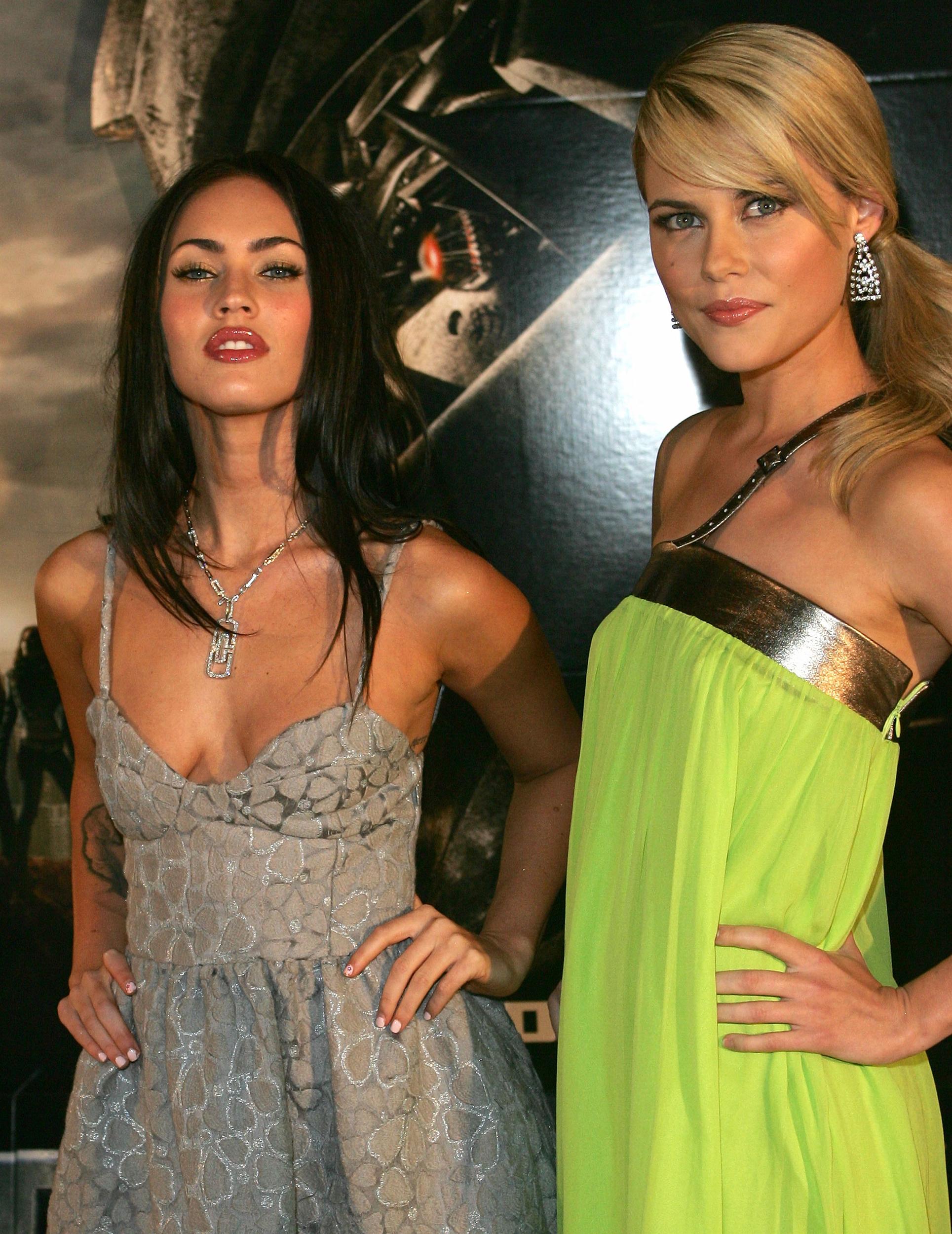 With TRANSFORMERS and SHUTTER on her resume, Taylor could be poised to become a genre specialist, but she has also recently completed the non-genre BOTTLE SHOCK, with Alan Rickman and Bill Pullman. Does she enjoy the challenge offered by science-fiction and horror films?
“I do actually,” she responds enthusiastically. “It’s not to say that’s all I want to make for the rest of my career, but I like the spectrum of emotions that you get to play with when you do a movie like this. You’re dealing with rich and potent emotions. Each day you go to work, you’re dealing with the threat of death and the world of the supernatural, betrayal and secrets and mistrust in a relationship. So you’re playing stakes that are very, very high. And I think that’s great for a young actor, to be thrown into that world, where you’ve got such an array of colors. From the start of the movie, where it’s blissful, happy newlyweds, to the end of the movie where it’s like complete distress.
“I’m a young actor and I’m learning, and every job is a pleasure,” Taylor concludes. “Honestly, it’s such a pleasure going to work as an actor; it’s such a wonderful craft. It’s a total blessing, and everyone wants to help you.”

RELATED ARTICLE: How does SHUTTER rate according to other remakes of Asian horror films? Check out: Remaking Asian Horror: A Brief History.

One Reply to “Interview: Rachael Taylor on "Shutter"”