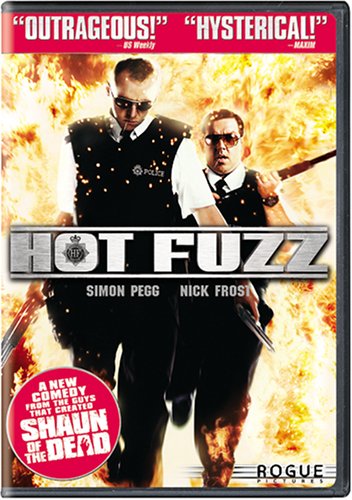 HOT FUZZ – from Edgar Wright and Simon Pegg, the team behind 2004’s wonderful zombie-comedy-romance SHAUN OF THE DEAD – at first resembles a spoof of cop movies. With Pegg as Nicholas Angel, an impossibly brilliant London police officer (not police “man”), who gets sent to a small village because his superiors are tired of the way his good example is making everyone else look bad by comparison. Needless to say, much comedy ensues from watching the supercop reduced to such trivial tasks as tracking down an escaped swan, before he finally uncovers a murderous conspiracy worthy of his talents. But surprise, surprise: the movie takes a big part of its inspiration not just from police-buddy movies (like BAD BOYS II, which is visually referenced in the film) but also from horror films.
The plot hinges on a secret cult that meets at night, plotting their evil deeds (a la CITY OF THE DEAD/HORROR HOTEL). With its provincial town hiding a dark secret from a newly arrived cop, there is more than an echo of 1973’s THE WICKER MAN (as if to underline the parallel, that film’s star, Edward Woodward, shows up in the cast of HOT FUZZ). There is even an underground catacombs filled with the skeletons of their victims. Moving into slasher territory, the murders are all carried out by a cloaked, hooded figure who axes a couple of victims, fakes a bloody car accident to cover up his tracks, blows another one up, pushes a church stone on top of the head of a nosy reporter, and impales one poor old lady with a very long pair of garden sheers. Most of this is done in full view of the camera. We get to see two bloody severed heads on the road at the scene of the accident. The woman stabbed with the sheers shoots a spray of blood on the storefront window of her cozy little horticulture shop. And in the most spectacularly gruesome moment, the reporter has his entire cranium instantly obliterated in a welter of computer-generated gore, the falling V-shaped stone wedging itself in between his shoulders where his head used to be, while his body flops around like a disjointed puppet.


Strangely, little if anything is done in any of these scenes to signal that they are a joke. They are presented pretty much exactly as they would be in a straight-out horror movie – the scenes never go far enough over the top to become amusing (unlike the gore in FIDO, which opened this weekend). The results feel botched – as if a cop movie spoof had been awkwardly rammed into a seriously splatter film, with a big, violent blowout finale to blur the lines between the two. When the film shifts back into action-movie mode, the final shoot-out is more Sergio Leone Western than LETHAL WEAPON, with Angel and Butterman taking on a town full of corrupt cultists, guns blazing. It’s a pretty funny idea, seeing this quiet English village turned into a killing zone, with the quirky local eccentrics all packing enough heat to make the most fearsome inner city gang cringe.
Unfortunately, director Edgar Wright hasn’t quite got the stylistic chops to realize the sequence fully; like the other action moments, it’s blurry and confused, sort of a sub-par John Woo that makes you appreciate the real thing all the more. And as with splatter scenes, this more conventional carnage betrays some uncertainty as to where comedy ends and drama begins, tossing in a couple of suspense moments that fall flat because we’re expecting a laugh that never comes. Miscalculations like this prevent HOT FUZZ from achieving the perfect mixture of laughs, scares, and romance that made SHAUN OF THE DEAD so brilliant.
There are plenty of good jokes but none of the romance that balanced the blood in the previous film – unless you count the homoerotic undertones implicit in the buddy cop relationship between Angel and his new partner Danny Butterman (Nick Frost). Butterman is so gaga over Angel, and the two spend so much time together without any sign of a female love interest to come between them, that when Butterman finally asks Angel up to his pad for a drink, the film seems on the brink of having Butterman come out of the closet, but it never happens. The result leaves an empty feeling – like a set-up without a punch line. When Wright and Pegg made SHAUN OF THE DEAD, they were mixing it up in a genre that demanded a colorful splash of grue, but HOT FUZZ is different sort of cocktail.
Yes, cop movies can be violent, but the violence tends to be cleaner, faster. Yes, we expect the villain to suffer a spectacular demise at the conclusion, but that usually takes the form of an explosion, not a miniature church spire driven up through his lower jaw and out his mouth. (Actually, this last moment is one that does earn a chuckle. Although the initial impact is as cringe-inducing as the other splatter moments, the wound proves not to be fatal, which leaves the poor sod groaning, “This really hurts.” That tiny little bit is enough to break the “serious” lock and open up the gates of laughter.)
Despite these botched moments, HOT FUZZ is full of great bits and pieces. Pegg is perfect in the lead, and Frost provides the perfect support, recreating much of the charm from SHAUN. Timothy Dalton turns on the slick charm as the prime suspect, and Jim Broadbent delivers another reliably solid performance as the head of the local police. Really the only problem here is that Wright and Pegg slightly miscalculated the recipe: it still tastes great, but the ugly splash of red dampens one’s appetite for the aperitif. Still, you’ve got to love any movie in which the bad guys kill of an aging, half-assed actor because he gave a lousy performance as Romeo.
HOT FUZZ (2007). Directed by Edgar Wright. Written by Wright & Simon Pegg. Cast: Simong Pegg, Martin Freeman, Bill Nighy, Robert Popper, Joe Comish, Chris Waitt, Nick Frost, Timothy Dalton, Edward Woodward.