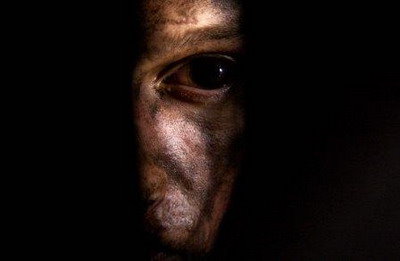 I’ve been so busy attending films at the Screamfest film festival in Hollywood that it has been difficult to keep up writing about them. Now that the screenings are over, I have time to pick over the bloody bones of the victims (a couple of real duds) and lend aid to the survivors (a handful of films to watch for). Also, I will try to identify the emerging trends among the films screened this year, although their deeper sociological significance may be beyond grasp at this point.
HALLOWED GROUNDS begins with a classic horror movie opening: a woman traveling on the back roads suffers engine failure, which forces her to pull into a small town for assistance. You can bet the price of your ticket that all those friendly, easy-going country folk are not really so nice. In a plot development that jumbles together CHILDREN OF THE CORN, THE WICKER MAN, and THE BIRDS, it turns out that, decades ago, the local preacher crucified victims in the cornfield, dressing them up as scarecrows and leaving them alive so that their screams would frighten away the birds. A lynch mob from a nearby town put an end to the preacher’s depravity but not before he prophesized his own reincarnation. Guess what? Our heroine is selected to the lucky vessel of his rebirth – after being impregnate by the town’s current preacher.
As if realizing that this is not the most exciting storyline, the film tosses some early scenes wherein the spirit of the dead preacher animates a scarecrow. The design of the creature is suitably creepy, and some of the scenes are halfway fun in an old-fashioned monster movie kind of way. Problem is, the whole thing feels rushed, as if shoe-horned in at the last minute: a reporter assembles the scarecrow to take some pictures for her tabloid newspaper, and- poof! – it comes to life instantly. It is so laughably easy you wonder why the preacher wants to be reborn in human flesh at all, so the film obligingly offers an answer: the scarecrow body is “easily damaged,” meaning it’s one of the easiest monsters to defeat in the history of cinema.
The film huffs and puffs quite a bit, trying to build up suspense, but it never amounts to much. The religious loonies of the town are more annoying than frightening. Why the story opted to emphasize them at the expense of the scarecrow, which could have been a memorably movie monster, is anyone’s guess. Not that the handling of the supernatural forces is much better. In the embarrassing low point, our heroine is supposedly held immobile by animated appendages of the stalks of corn in the field, and it is way too obvious that she could just walk away if the script weren’t telling her to hold still and pretend to be trapped.


Even worse is THE RAGE, a splatter-filled tale about a mad scientist (WISHMASTER’s Andrew Divoff) who creates a plague that unleashes an unstoppable rage in its victims. After an accident at the lab, the disease escapes, infecting some vultures, which pursue and bedevil a band of teenagers coming home from an outdoor music fest. A more pathetic bunch of losers is hard to imagine, and you might almost enjoy seeing them picked off, except the film is so awful that it’s hard to enjoy anything about it. THE RAGE feels like a throwback to ‘80s direct-to-video horror, when a bunch of prosthetic makeup covered in blood was all you needed to make a horror movie. As if to emphasize the retro feel, there are even dated dialogue references to the evils of capitalism that are supposed to explain the mad doctor’s motivation for unleashing the plague. The vultures are rendered with unconvincing computer-generated effects that suggest old-fashioned stop-motion (complete with squawking sound effects that seem lifted from a Ray Harryhausen movie). Despite its short running time, the film seems to go on forever, with the obligatory scenes of the dispatched villain returning from apparent death. To top it all off, the mad scientist has an obnoxious dwarf assistant, who gibbers and growls inarticulately through some truly insipid dialogue– and the film offers up subtitles to make sure we don’t miss a single line! Thanks for nothing!
Considerably better is SHROOMS, a tale of a group of college kids who vacation in Ireland so that they can enjoy the local magic mushrooms. When one girl accidentally ingests a considerably more potent – and potentially lethal – species, she begins to see visions of violence perpetrated by two threatening characters from a local legend. Her friends think she is hallucinating, until they start to die mysteriously one by one. The film briefly has a little bit of fun with the depiction of characters too stoned to realize the danger they face, but mostly the film plays effectively plays the reality-versus-illusion game, keeping us guessing about what is really happening. The hallucinatory imagery propels the film out of thriller territory, offering monstrous visions of horror that are both spooky and shocking. Inevitably, the final revelation is a disappointment; the explanation wraps up the plot threads, but it’s a bit of a credibility stretch, and we were probably better off when we had to make up our own minds about what was really happening. Still, the movie works wonderfully well over all.
Screamfest offered three other winners: THE SIGNAL, STORM WARNING, and TIMBER FALLS. The former is a vaguely futuristic tale of a television signal that incites the inhabitants of a city into uncontrollable violence; the tone and background music seem evocative of ‘70s shockers like David Cronenberg’s RABID. Both STORM WARNING and TIMBER FALLS deal with young couples who get lost in the wilderness and come face-to-face with dangerous locals – imagine DELIVERANCE cross-bred with TEXAS CHAINSAW MASSACRE, and you will have some idea of the results. Despite the similarities, each film stands on its own, thanks partly to the diverse settings. TIMBER FALLS is scheduled for theatrical release in December; STORM WARNING will probably go direct-to-video, since the box office failure of HOSTEL 2 has soured Hollywood on the financial prospects of violent horror films.
All three of these films were followed by question-and-answer sessions with the filmmakers. I’ll be back to give detailed accounts as soon as I’m done transcribing.
Meanwhile, I want to take a brief look at this year’s trends. Slaughtered animals were fairly common. A whole pack of dogs gets it in 30 DAYS OF NIGHT. Two more die in the Thai film alone (one run over by a car, the second decapitated). A black cat has its neck broken in INSIDE. A baby kangaroo is split open in STORM WARNING. Less dramatic (because they are not pets), numerous birds are wiped out in HALLOWED GROUND and THE RAGE. What does this mean? I doubt there is any deep significance; presumably the jaded sensibilities of horror hounds no longer react to the death of human beings, so innocent pets are being targeted as a way to up the shock factor.
Christianity – or more precisely, backwoods fundamentalism – takes thumping in HALLOWED GROUND and TIMBER FALLS, both of which involve attempts to forcibly impregnate a woman. The films are clearly attempting to make a satirical statement about the hypocrisy of religious fanatics convinced that their beliefs justify their depraved actions. Neither film comes close to matching CARRIE, and focusing on a few backwoods kooks seems almost quaint in an era when alleged Christians control the reins of government and use their beliefs to justify the unfettered use of power, including unprovoked war and torture of enemies.
The recurring visual motif was crucifixion. In some cases (like HALLOWED GROUND), this was quite literal; more often, it was figurative, with characters in various ways pinned, nailed, and/or impaled to walls, tables, or doors. The significance here seems less metaphoric than visceral. All those shots of knifes, nails, and (in one case) scissors jabbing into palms, wrists, and arms are guaranteed to elicit a gasp from the audience. Even better are the follow-up scenes, when the victim, pulls his or her hand loose, the rusting nail sliding all the way through the pierced flesh. This definitely seems to be the trendy gore effect of 2007, appearing in various forms in THE SIGNAL, THE INSIDE, and TIMBER FALLS. In fact, by the time TIMBER FALLS reverts to the rather old-fashioned gag of slicing off someone’s pinky finger (which was a trend back in 2005 with WOLF CREEK, HOUSE OF WAX, and THREE EXTREMES), it seems, like so two years ago.