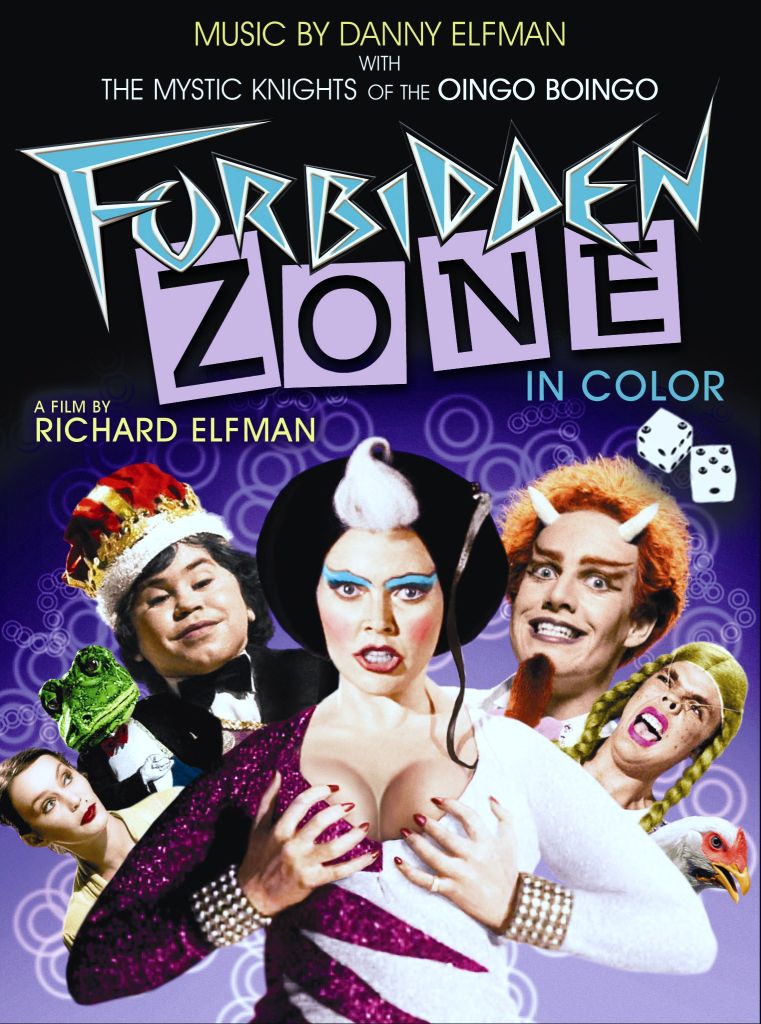 FORBIDDEN ZONE, the 1980 black-and-white cult film written and directed by Richard Elfman, is getting a new lease on life, courtesy of digital colorization by Legend films (the company responsible for recently releasing such neglected titles on DVD as THE MAN WHO COULD CHEAT DEATH and THE SKULL). To promote the July 29 release of the colorized FORBIDDEN ZONE on DVD, Elfman will attend an American Cinematheque screening of the film on Wednesday, July 30 at 8:00pm in the Egyptian Theatre, Hollywood, along with other guests to be announced. Cult movie fans and fans of Oingo-Boingo will certainly want to pick up a copy of the DVD (the director’s brother, Oingo-Boingo front-man Danny Elfman, provided the music and appears in a small role), but the movie is such a wild ride that a cinema screening, along with a theatre full of like-minded fans, adds an extra layer to the entertainment.
Click below the fold to read the press release.

Writer/Director Richard Elfman is bringing back a favorite in the underground film world. The 1980 FORBIDDEN ZONE, now a cult classic, will have a one night only screening at the Egyptian Theatre in Hollywood on July 30th. The science fiction musical Forbidden Zone has been newly restored and colorized by Legend Films and will be seen in its original un-cut “R” Rated version. The film is considered one of the best loved and incredibly entertaining “cult” films, perhaps second only to Rocky Horror Picture Show in its following.
Wednesday, July 30 – 8:00 PM
Special Screening!
Digitally Restored! FORBIDDEN ZONE, 1982, 74 min. Dir. Richard Elfman. A mysterious door leads to the Sixth Dimension — get ready for a wild ride – in the greatest cult classic of all time. Beautiful young “Frenchy” (Marie-Pascale Elfman) slides through cosmic intestines into a subterranean world ruled by horny midget King Fausto (Herve Villechaize) and his jealous Queen Doris (Susan Tyrrell). “Chicken-boy” (Matthew Bright, director of FREEWAY) comes to the rescue, only to have his head cut off by the soul-singing Devil himself — played by Danny Elfman and the original Mystic Knights of the Oingo Boingo. Frog butlers, topless princesses, and rioting school kids sing and dance in unforgettable musical numbers by Danny Elfman, Cab Calloway, Josephine Baker and others. An experience guaranteed you will never forget! Now in mind-boggling color! Newly remixed Dolby Digital 6 track stereo. Official website. Discussion following with director Richard Elfman and other guests (TBA).
Richard Elfman, aside from his writing and directing talents, was the founding member of “Mystic Knights of the Oingo-Boingo” which included his brother, the hottest film composer in Hollywood today, Danny Elfman. Danny not only composed the original music to Forbidden Zone, but also joined the cast as “Satan.” Forbidden Zone delves into the world of the Sixth Dimension with many bizarre twists and turns along the way. The film also stars Herve Villechaize, Susan Tyrrell, Marie-Pascale Elfman and features the music of Oingo-Boingo, Cab Calloway, Josephine Baker and many others.
Newly restored and colorized, fans can now enjoy the film on a whole new level. “I always wanted to see Forbidden Zone in color” said Richard Elfman, director of Forbidden Zone. “Now-25 years later, with the incredible technical assistance and artistic collaboration of Legend Films, we are finally able to present the film as I always intended it-in vivid, glorious, mind-boggling color!”
The movie will be released on DVD on July 29th in widescreen with 5.1 Dolby Digital sound with a DTS 5.1 Soundtrack. The DVD is packed with tons of bonus features including pop-up trivia, extended scenes and the original theatrical trailer in color. “We are thrilled to present for the first time the color version of Forbidden Zone,” said Barry Sandrew, PhD, Founder and COO, Legend Films. “Working on this cult classic with director Richard Elfman was a wonderful blend of creativity and technology.”

FORBIDDEN ZONE hails from the Golden Era of midnight movies and cult flicks, but besides being off the wall and mondo weird, it is also one of the few truly expressionistic films ever made, masking its low budget with a use of deliberately artificial sets that recall the silent classic THE CABINET OF DR. CALIGARI. Because of this, I am not quite certain that colorizing the film is a good idea; the black-and-white artificiality was part of the film’s charm, and I fear the expressionism will not translate well into color. Still, it should at least be worth checking out for curiosity value, if nothing else.