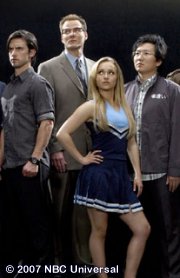 Missed this earlier, but TVGuide.com
reports that creator Tim Kring is hopeful that NBC will greenlight a mini-series to wrap up his cancelled show HEROES.
Kring said he would be meeting with NBC to discuss the idea later this month.
The story would take place a year or more after the events of the finale, in which Claire (Hayden Panettiere) revealed her invulnerability in a very public manner.

There will be a huge cultural and social change in the world,” says Kring. “Some [of our characters] will be hiding, some struggling, some basking in the glory.”

The producer seems confident he can reassemble the cast if NBC chooses to go forward with the proposal.