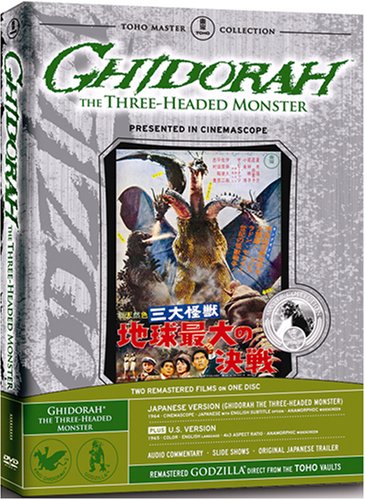 This fifth film in the Godzilla series (following MOTHRA VS. GODZILLA) is highly regarded among fans who first saw it on television as children, but anyone looking for an awesome monster movie had best look elsewhere. By this time, the franchise had given up all pretense of serious science-fiction, opting for comic antics: this is the film in which Godzilla abandons his role as a walking metaphor for nuclear destruction and morphs from villain to hero, teaming up with fellow Earth monsters Rodan and Mothra to defeat King Ghidorah, an extra-terrestrial menace that previously eradicated all life on Venus.
The convoluted plot has a Japanese policeman protecting the visiting Princess Salno (Wakabayashi), who is under threat of assassination. After her plane explodes over the ocean, the Princess somehow shows up alive, now believing herself to be a prophet from Venus; she warns of the advent of King Ghidorah, a space monster that destroyed her world millennia ago.

Coincidentally, Godzilla and Rodan reappear, and the twin fairies from Mothra’s Infant Island summon their god (now in caterpillar form, since the conclusion of MOTHRA VS. GODZILLA) to convince the two rampaging reptiles to fight the three-headed dragon. (This film includes the infamous scene of Mothra, Rodan, and Godzilla literally conversing in monster language.) Meanwhile, assassins attempt to kill the Princess, who neglects to take precautionary measures because she does not remember being the Princess. Fortunately, the monsters interrupt the assassination attempts (e.g., knocking down power lines when she is about to be electrocuted), and Princess Salno regains her memory just as the final assassin is killed in a landslide caused by the monster battle, which ends with Ghidorah flying away in defeat.

Even by the waning standards of Toho monster movies, GHIDORAH is weak. Its message about cooperation in the face of a common enemy is delivered on the level of a kiddie flick. The pacing is slow, padded out with repetetive and/or unnecessary scenes. Just when the action does seem to be building to a climax, the movie inserts frustrating fade-outs reminiscent of a made-for-television film (you expect a commercial break to cover up the fact that we’re transitioning away from action we want to see).

The idea seems to have been to cross-polinate two genres: science-fiction and international intrigue. The two mix about as well as oil and water, and the screenplay’s trick of having the monster action conveniently assist the humans wears thin pretty quickly.  Part of the problem is the jarring tonal shifts between the live action and the special effects. Director Ishiro Honda shows a few touches of wit early on (especially when poking fun at the amateur astronomers awaiting the arrival of a UFO – which never shows up), but he mostly plays the human action straight. Special effects director Eija Tsuburaya, on the other hand, handles the monsters like comical Muppets, with antics barely one step removed from the Three Stooges.

To be fair, if one embraces the silliness, some of it is amusing. Rodan’s shift from laughter – when Godzilla is being doused by Mothra’s silk-spinning – to consternation – when the thread is turned on him – is a juvenile laugh riot. At times, GHIDORAH does work on its own terms, as when the titular menace blasts the relatively puny Mothra caterpillar and the humans cry out in alarm; for a brief moment, the action has actual impact, above and beyond a cheap laugh.

Even taking this into consideration, the special effects have noticably degraded in this film. There are fewer process shots to combine live-action with special effects, making the monster footage seem like puppet theatre cut into the movie. Citywide destruction is kept to a minimum, in favor of staging most of the battle in rural areas. Also, this is the first Godzilla film in which there is no military effort to defeat the monsters; the humans simply stand around and watch while the monsters battle it out.

The cast of human characters is pretty colorless. The only sparks fly at the very end when Princess Salno bids farewell to her policeman-protector: their eyes express the emotions they are not allowed to voice. Other than that, GHIDORAH is a tepid affair, okay for fanatics but requiring too huge a suspension of disbelief to be regarded as much more than a campy trifle.

If GHIDORAH, THE THREE-HEADED MONSTER deserves to be remembered, it is for introducing the magnificent monster that would go on to be Godzilla’s most popular foe, appearing in no less than six subsequent G-films. (Besides Godzilla, Mothra is the only Toho monster with more on-screen appearances.) Ghidorah is presented here as a scourge of the Solar System, an uncontrollable force of destruction capable of reducing entire worlds to burnt-out desolation. Unfortunately, this concept would be abandoned in most of the monster’s subsequent appearances, in which the three-headed dragon was reduced to the status of a super weapon, controlled by advanced civilizations seeking to overpower Earth. In this, his first on-screen appearance, Ghidorah makes an indelible impression as the interplanetary destroyer of worlds; too bad the film itself fails to live up to the concept. 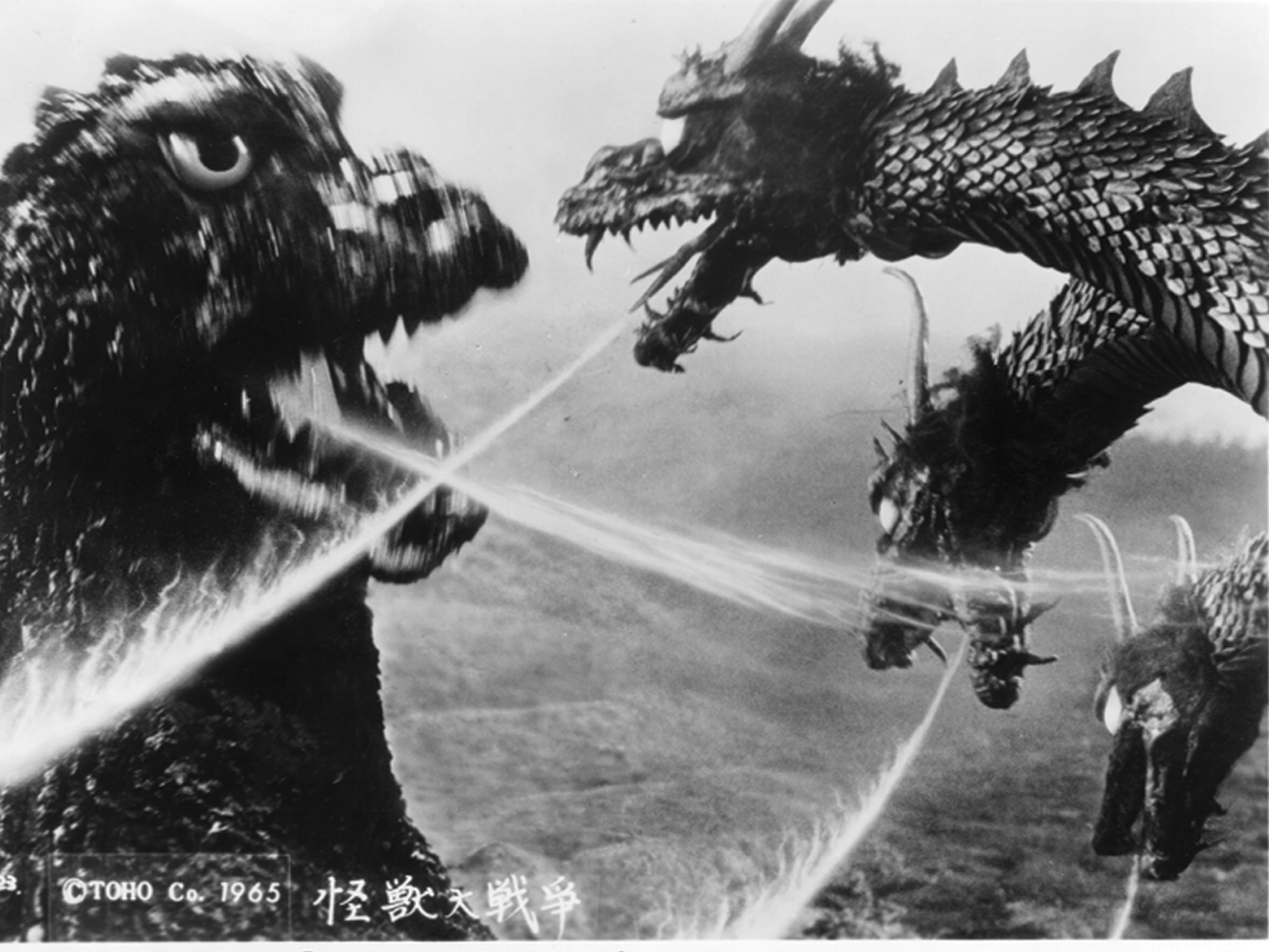 features both the original Japanese cut of the movie, with optional subtitles, and the re-edited American version. The transfer and framing of both versions is satisfactory (unlike the same company’s MOTHRA VS GODZILLA DVD, in which the American version was badly cropped, cutting off the edges of the wide-screen photography). The color is good (better than the faded prints available for theatrical retrospective screenings), but it is not as clear and sharp as DVD releases of other Toho films from the same period.
Also on the disc are an original Japanese trailer, galleries of posters and photographs, a biography of Eiji Tsuburaya, and audio commentary by David Kalat (author of A Critical History and Filmography of Toho’s Godzilla Films).
The trailer is of mild interest because it includes a few unfinished effects scenes, such as Godzilla reacting to the lightening blasts from King Ghidorah, which have not been added to the shot yet. There are also a couple of cuts clearly showing a hand-puppet version of Godzilla that does not match the full-size suite worn by the actor.
The galleries include only a handful of posters and photographs, but unlike most DVD galleries, these contain elaborate captions that identify the images and explain their significance.
The video biography of special effects supervisor Eiji Tsuburaya is, in essence, a slide-show: comprised of still photos and narration, it does a good job of hitting the high points in Tsuburaya’s life and career; even hardcore fans, already familiar with the details, will find it interesting.
The Japanese cut of the film is approximately ten minutes longer than the American version, but in this case (unlike most of Toho’s efforts) it is not clear that the original version is superior. The longer cut moves at a slower pace, and much of the footage missing from the American version adds little to the story. In the most egregious example, the twin fairies sing not once but twice to Mothra; the second scene is virtually identical, cut for cut, to the first. The American re-edit wisely deleted the unnecessary reprise.
The American version moves along more quickly, but the re-editing introduces problems of its own. The arrival of the meteor that brings Ghidorah to Earth is moved up to the opening sequence, and the monster emerges from the meteor (in a spectacular display of pyrotechnics) much earlier. This creates an absurd situation in which Princess Salno is prophesying the arrival of a creature that has already arrived, and yet it seems to be news to the people listening to her.
Another silly bit of rejiggering leaves what looks like a gaping hole in the effects: Godzilla wades ashore, hears the sounds of Rodan flying overhead, and looks up; unfortunately, the POV shot of the clouds overhead shows no sign of the giant pteranodon – just empty sky. The glaring absence  suggests that the effects team forgot to add Rodan into the shot. This turns out not to be true: in the original Japanese continuity, Rodan is first heard, then seen emerging from the clouds; after being briefly visible, he disappears back into the clouds. In the American version, the shots of Rodan have been moved up to an earlier scene of Godzilla in the ocean, implying that the sea-going dinosaur notices the flying monster and follows him to land. Reshuffling the footage creates the odd continuity gap, leaving no visible reason for Rodan’s mysterious disappearance.
The re-dubbing has its good and bad points.  For some reason, Princess Salno’s Venusian prophetess becomes a Martian in the English-language version. On the negative side,  giving regional accents to characters in a rural area creates Japanese characters who sound as if they wandered in from the set of FARGO. On the positive side, sound effects from the monsters were added in the background of the final gun battle between the policeman and the assassin, creating a stronger connection with the climactic monster battle taking place just over the hill.
The audio commentary by David Kalat, which plays over the American version, is a bit disappointing. Although Kalat obviously knows his stuff, he seems too eager to retract statements he made in his book (about the preferability of subtitling to dubbing) while mounting a case for the superiority of the American re-edit, and he is equally eager to downplay the flaws in GHIDORAH, THE THREE-HEADED MONSTER, both in the original version and in the English-dubbing.
Fortunately, Kalat’s formidable analytical skills have not completely abandoned him, and when he gets off his pro-dubbing soap box he does have interesting observations to make. Most notably, GHIDORAH, THE THREE-HEADED MONSTER represents a considerable advance for female characters in the series, who take a more active role in solving the problem, instead of waiting around for the men to rescue them. Kalat also points out that Princess Salno is at her most assertive when she has abandoned her royal garb in favor of a male fisherman’s hat and coat. When her rescuers put her back into female clothing, her assertiveness begins to recede, until by the end of the film she is back in her former role.
The Toho Masters DVD of GHIDORAH, THE THREE-HEADED MONSTER does a good job of presenting this historically important (if over-rated) entry in the Godzilla series. For many American viewers, this is the first opportunity to see the original Japanese version of the film, which in and of itself makes the disc worth a rental. It is also nice to have the American dub preserved for comparison purposes. But neither the quality of the film, nor of the DVD bonus features, is enough to make this an essential part of a sci-fi fan’s collection. Owning this one is strictly for hardcore fanatics and completists.

When first released in the United States, the title of the film was spelled GHIDRAH, THE THREE-HEADED MONSTER, making the monster’s name only two syllables instead of three. As David Kalat points out in his DVD audio commentary, the Japanese language is spelled in such a way that two consonant sounds cannot be contiguous; a correct rendering of the original Japanese spelling produces the revised title GHIDORAH. (Although the spelling and pronunciation may have varied slightly over the years, Ghidorah’s subsequent film appearances utilized a three-syllable version of the name.) 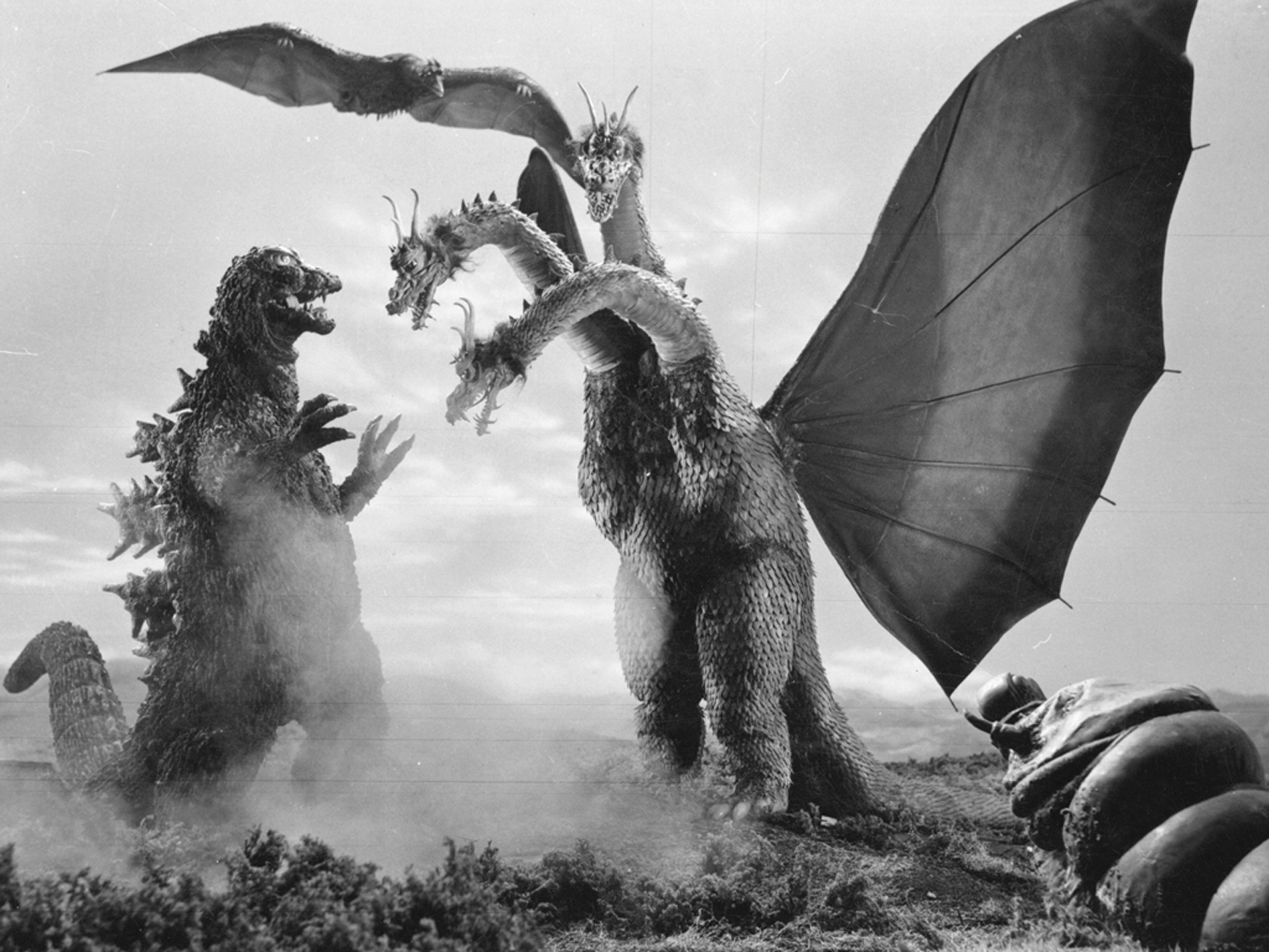