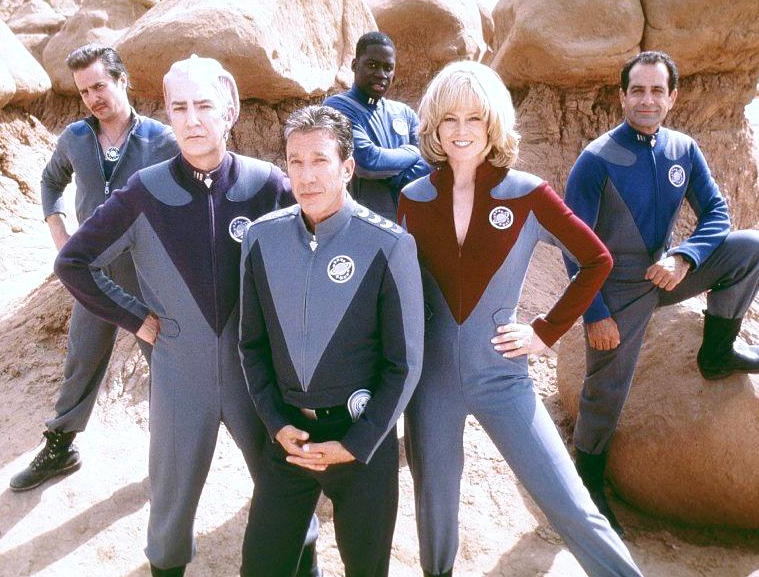 Despite a premise that sounds far from promising, GALAXY QUEST turns out to be an amusing adventure that ofers both good comedy and reasonably exciting science fiction; its obvious inspiration is the STAR TREK franchise, and it manages to best the majority of those films. The basic idea is to take some actors with a long history of play-acting in an imagnary world, then thrust them into a “real” version of that world. This sounds a bit like the sadly disappointing THREE AMIGOES, which undermined its own premise by presenting little contrast between the Hollywood West and the “real” West (which in the movie became just a slightly grimier version of the Hollywood west). GALAXY QUEST does something similar by taking the cast of an old, canceled sci-fi show and putting them in Outer Space, but it makes a running joke out of the fact that everything they experience in reality conforms to the cliches of their old tele-dramas. And it has one extra act up its sleeve: the actors in question are typecast has-beens whose only gigs, since their show was cancelled, consist of promotional appearances and fan conventions – an area ripe for parody.
When we first meet the cast of the old “Galaxy Quest” TV show, they are about to make a convention appearance for hundreds of rabid fans. Soon, however, they meet the ultimate fans: a group of Thermians who turn out not to be humans in costume but actual aliens. The Thermians have intercepted the old “Galaxy Quest” signals and misinterpreted them as historical documents. Faced with extermination by the evil Sarris (Robin Sachs), Mathesar (Enrico Colantoni) and his comrades seek out the help of Commander Peter Quincy Taggart, Lt. Tawny Madison, Dr. Lazarus, Tech Sergeant Chen, and navigator Laredo, little realizing that these are actors, not astronauts. Jason Nesmith (Tim Allen), who played Taggart, is too flattered to break the awful truth to the Thermians, so he convinces his old cast to go along with the gig. Although they really don’t know what they’re doing, the actors are able to fake it, because the Thermians have faithfully recreated their ship, down to the last detail, from watching old episodes of the show.


The cast soon find themselves trapped in dangerous situations from which they must extricate themselves by acting as they did in the show. The only one obviously uncomfortable with this is Guy (Sam Rockwell), a bit-player whose only role in the show was dying in the first five minutes of episode #81. Things go reasonably well at first, but then ugly reality rears its head. Will the cast rise to the level of expectations placed on them because of the larger-than-life roles they played, and do they really know enough about their own show to negotiate a plot without a script and a director to tell them what to do? (Well, no they don’t; fortunately, their fans do, and in one of the funniest sequences, a group of fan geeks manage to put all their knowledge of trivia to good use, saving their heroes from certain death, with a little help from the Internet.)
The film’s opening is weak. The attempt to spoof the “Galaxy Quest” show is not nearly as funny as one would hope, although the material seems on target in terms of details (rock sets and cyclorama skies suggest the original STAR TREK series with efficient accuracy). But once our heroes are taken on their quest, the picture takes off and really flies. The script is peppered with funny dialogue, and the cast make the most out of it. Tim Allen, without doing a William Shatner impersonation, captures the feel of a starship commander; you believe he could have played this part, and the humor comes from his reactions to the situations, not from acting like a bad actor. Sigourney Weaver actually gets to be funny (she played more or less a straight man role in GHOSTBUSTERS); her character’s frustration at the limits of her role are believably amusing, and Weaver herself is stunning as a blond bombshell, quite the opposite of her usual image. Rickman gets the frustrated, pretentious English actor routine down pat; more than that, he actually makes the scene work when the film shifts to serious mode—something usually deadly in a comedy of this sort. Tony Shalhoub’s deadpan delivery is the perfect counterpoint to Sam Rockwell’s increasing edginess as guy, and Daryl Mitchell has one of the best scenes when his character is asked to really pilot a starship out of dry dock.
Dean Parisot captures the science fiction ambience perfectly, thanks to fine technical help form Stan Winston’s makeup, ILM’s visual effects, Jerzy Zielinski’s cinematography, David Newman’s music, and Linda DeScenna’s production design. The overall production is geared to capturing the glory and awe of the best science fiction, because we have to believe that the prospect would successfully lure some out-of-work actors who would know better if the whole thing just didn’t look so amazing. Rather like Blake Edwards, who made those kung fu scenes in the PINK PANTHER films really funny by doing them really well, Parisot takes the position that this story is not a spoof or send up of genre clichés, and humor is not derived from cheesy looking effects or cardboard sets. Instead, he handles the situations as if they were real, and the humor comes from the absurdity of actors reliving their familiar situations in real life.
The result is exciting and buoyant and fun. The movie doesn’t entirely sell the reality of its situation: it still seems rather easy for the actor-characters to rise to the occasion and succeed in real life just as they did on their show. But what works earns enough good will for us to overlook the minor flaws. And in a year that has poked much fun at science fiction fans (TREKKIES, FREE ENTERPRISE) is nice to see a film that acknowledges the eccentricity of fanatics but ultimately embraces them. With any luck, GALAXY QUEST will go on to generate its own fan following. Here’s looking forward to Quest Con #1.

The original dual-layer DVD release of GALAXY QUEST featured a good widescreen transfer, a Dolby Digital 5.1 English soundtrack, and optional captions. There were a handful of bonus features: a promotional featurette titled “On Location in Space,” Deleted Scenes, a Theatrical trailer, production notes, a Thermian Language audio track, and cast and crew biographies. The deleted scenes were the most interesting, finally explaining how Sigourney Weaver’s blouse got ripped open in such a provacative way. Least interesting was the Thermian audio track, which replaces the English dialogue with the alien language of the Thermians heard in the film; it’s funny for maybe a minute. The 10th Anniversary DVD (released on May 12, 2009) retains these bonus features and adds several others, making it a preferable replacement
GALAXY QUEST (2000). Directed by Dean Parisot. Written by David Hoard and Robert Gordon, story by Gordon. Cast: Tim Allen, Sigourney Weaver, Alan Rickman, Tony Shalhoub, Sam Rockwell, Daryl Mitchell, Enrico Colantoni, Robin Sachs, Patrick Breen.