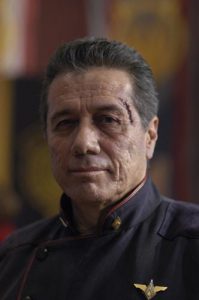 
The pilot was originally announced as an online series, but the script apparently impressed SyFy enough that a feature length film was commisioned. It’s unknown as yet whether Nico Cortez will reprise his role of the young Adama from RAZOR.
Whether CAPRICA, the current SfyFy GALACTICA spin-off , will be renewed is still an open question.