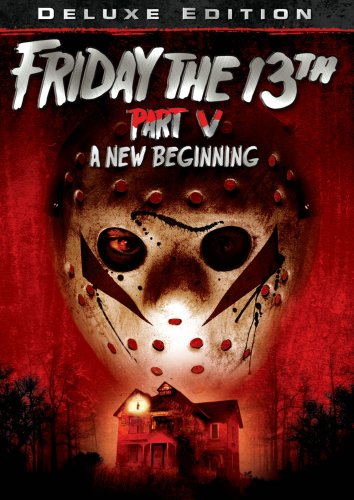 We’ll give Paramount the benefit of the doubt that they truly intended to end the FRIDAY THE 13TH series with young Tommy Jarvis chopping Jason Voorhees into a million pieces at the conclusion of FRIDAY THE 13TH: THE FINAL CHAPTER. Screenwriter Barry Cohen was given explicit instructions to make sure that the form of Jason’s exit wouldn’t leave any doubt that this was indeed the end of the line, even if  the final shot lingers ominously on the face of a traumatized Tommy, suggesting a possible alternate route – just in case. It turned out that “just in case” happened less than a year later when Paramount came to its fiduciary senses and commissioned a 5th installment of the franchise after THE FINAL CHAPTER raked in sixteen times its own meager budget. Danny Steinmann, coming off the nasty Linda Blair revenge-themed programmer SAVAGE STREETS in 1984, moved into the director’s chair. FRIDAY THE 13TH, PART V: A NEW BEGINNING has since become a bit of a pariah among fans because the screenwriters – looking for a way to get themselves out of the narrative dead end that THE FINAL CHAPTER had boxed them into – gave the sequel a twist ending that (while it makes more sense than most other films of the franchise) is handled so poorly by Steinmann that it utterly overshadows the show’s few virtues.
Friday the 13th, Part V: A New Beginning opens with a dream sequence in which young Tommy Jarvis (Corey Feldman returning for a cameo) watches a pair of grave robbers unwittingly revive Jason. He wakes from the nightmare as a teenager (played as a near-mute by John Shepherd) riding in the back of a bus on route to the Pinehurst halfway house for troubled teens (presumably, Tommy has been under state care since hacking Jason to pieces as a child.) As Tommy is shown the facility, we meet the heroically under-written cast of characters, a group of teens whose only real trouble seems to be a tendency towards petulance. ‘Always eating fat kid’ battles ‘walkman wearing, robot-dancing punk girl’ and ‘crazed axe-wielding loner’ for our attention until the arrival of neighbors Ethel Hubbard and son Junior straight from a Hee Haw parody of Mother’s Day.
It was at this point in the series that you could feel the producers, screenwriters and directors just throw up their collective hands and say “Hell, nobody takes this crap seriously – so why are we sweating it?” From this point on, the already limited characterization dropped down to almost nil. With no human beings to feel any sympathy with, audiences began to actually embrace Jason – often the only character with a defined agenda. We clearly remember our crowd at a showing of Friday the 13th Part VII: The New Blood cheering loudly for Jason’s brand of faceless mayhem and nothing else.
Anyway, Ethel’s complaints about the kids at the shelter getting into trouble on their property soon prove legitimate as fat kid Joey (Dominick Brascia, complete with melting chocolate bar screwed tightly in his pudgy little hand) pesters dangerous loner Vic (Mark Venturini) once too often and gets an axe buried right in his skull in broad daylight. People who remember nothing else about the film remember this moment – the one bright splash on an otherwise dull, ugly canvas. It’s at this point that the film begins setting up its twist ending, so if you haven’t seen the film and want to remain “surprised,” skip the next paragraph.
When the ambulance crew arrives to pick up fat kid Joey, paramedic Roy Burns (Dick Wieand) begins to have a fit of apoplexy at the sight of fat kid Joey’s body. Watching Wieand’s face contort recalls third-tier silent movie acting at its most histrionic. At the crime scene of the next two victims – a pair of leatherboys that arrived at Crystal Lake via Rydell High – Wieand has a similar outburst that etches into the very celluloid itself “I’m the killer!!!” and of course, he is. That’s right – it’s not Jason. Excluding his cameo in Tommy’s dream, A New Beginning marks the only film in the series where Jason is utterly MIA, racking up zero real-world kills to the chagrin of fans.
There’s an attempt to cast the specter of guilt on Tommy himself, real estate paid for at the conclusion of the previous film and spread more thickly here, but we simply know that it’s not him. Once “Jason” has hacked through the majority of the cast, we’re left with Shavar Ross, last seen making an ill-fated trip to a local bike shop with Arnold Drummond, Final Girl Pam (an unmemorable Melanie Kinnaman) and Tommy, who saves both of them by pushing the hockey masked killer onto a grouping of sharp farm-type implements. The mask is removed, revealing not the malformed inbred son of Pamela Voorhees, but the most obvious suspect since Raymond Burr in Rear Window. We’d love to tell you that A New Beginning is better than its reputation – to tell you that the efforts of the production not to cheat the finality of the previous film’s conclusion, but we simply can’t.
Even by the muted standards of low budget horror, the film is an unforgivably crass, ugly experience, devoid of suspense, and, thanks to the MPAA’s blood vendetta against the franchise, bereft of any interesting kills (after the broad daylight demise of fat kid Joey, of course.) Director Steinmann’s idea of humor can be found glued to the gutter, begging for scraps of uncomfortable laughter from the lowest possible denominator. Fans of the series – and of horror in general – are right to vilify it.

Whatever its faults, Paramount has given Friday the 13th, Part V: A New Beginning an excellent presentation on their Deluxe Edition DVD, released june 16. No one with the film fresh in their mind will be surprised at Director Steinmann’s demeanor on the commentary track; sounding near-inebriated, he jokes his way through the film offering little decent information. Joining him is Shavar Ross, who offers the only interesting stories about the production, and a “superfan” moderator, who has probably chosen to champion the film precisely to crowbar himself into this sort of situation (mission accomplished, we thought, you can stop pretending to like this turd.)

The package is rounded out with the original theatrical trailer, and the disc comes with the same lenticular slipcase as Friday the 13th Parts IV and VI.
[serialposts]