Although this is the second FRIDAY film, it is really the first in what became the franchise. In a weird way, it is the A SHOT IN THE DARK of horror films – a sequel that reinvents the basic set-up, creating a launching pad from which the remaining  sequels take off. The methods employed are not particularly clever; in fact, they are sloppy and contradictory. But it’s hard to argue with success. In that regard, at least,  this sequel resembles the original FRIDAY THE 13TH: like its predecessor, PART 2 is a disreputable, unrefined effort that nevertheless sold millions of tickets.
The challenge facing any serious critic assessing the film is dealing with the fact that it became very popular even though it is not very good. The solution is to acknowledge that even crude techniques, when properly employed, can be effective, in a lowest-common-denominator kind of way. Taking the basics of the first FRIDAY, the sequel  places a group of camp counselors in an isolated location where they are stalked by a mostly unseen killer, who dispatches them in a variety of gruesome ways. Sophisticated? No. Scary? Yes.
Certainly it is easy to pinpoint flaws in FRIDAY THE 13TH PART 2 – the most obvious being that its premise contradicts the previous movie in a way that is irreconcilable (although fans have certainly tried). Part 1 had been intended as a stand-alone film, its murderous Mrs. Voorhees neatly decapitated by final girl Alice (Adrienne King), precluding any chance of bringing her back for a rematch. With the killer dead, writer Ron Kurz had her son Jason step into the breach.
The problem, of course, is that in the first film Mrs. Voorhees was avenging the death by drowning of her son; if Jason is alive and well, she had no reason to kill all those camp counselors. Given a charitable frame of mind, one might imagine that the paths of Jason and his mother had somehow never crossed, leaving her in the dark as to his continued existence, but dialogue in PART 2 specifically tells us that Jason witnessed his mother’s death, indicating that he was close at hand during the events of FRIDAY THE 13TH (even though the only sign of him was a CARRIE rip-off in which he scares Alice by jumping out of the lake – a scene clearly meant to be a dream).
In short, PART 2’s premise is completely nonsensical; the only way to enjoy the film is just to ignore it and go for the gore. Even here, the film comes up a bit short. Howls of critical outrage had resulted from the carnage FRIDAY THE 13TH; Siskel and Ebert slammed the MPAA for givng the film an R-rating, and the organization reacted by clamping down on the sequel, ensuring that the body count, though as large as ever, was considerably more bloodless.
What the film has going for it is a certain competent professionalism. The original had been produced and directed by Sean Cunningham as a way to raise money to jump start some non-horror projects. Although Cunningham turned the film into a blockbuster, much of the success was due to the title and the advertising campaign; one cannot shake the lingering suspicion that he was in it for the money, sitting in the director’s chair only because he knew he could turn the film in on time and on budget. On the other hand, PART 2’s director, Steve Miner, is a bit more interested in the hands-on aspects of film-making, in using the camera angles and movement to elicit screams from the audience.
Even this is not enough to make the film really good, and Miner is not above stooping to some seriously lame shtick, as in the opening prologue that – gasp!– kills off the lone survivor from the original.1 Overlooking for a moment that the now-motherless Jason has lived his entire life as an uneducated imbecile lurking in the trees surrounding Crystal Lake – and, consequently, could not possibly have the means or intelligence to track down Alice in a distant city – there is the little issue of the spring-loaded cat that leaps through the window at Alice, providing the film’s first jump. It’s a cheap tacitc to achieve a cheap scare – made all the worse because the cat’s trajectory indicates that it is not leaping but thrown by some off-screen stage hand.2
Once the action shifts to Crystal Lake, things pick up considerably. The usual nonsense ensues (lots of hot young bodies eager for copulation, which serves as a prelude to violent death), but as much as the mind resists, the adrenalin responds to the manipulation – best exemplified by a scene of a lone character in a wheelchair. The editing alternates tracking shots from before and behind him; with both sides covered, it is impossible for Jason to be anywhere near the target without being seen, and yet each switch in angle unnerves the viewer further. It is as if Jason were somehow hiding behind the camera itself, which offers not his POV but our own; we are watching the victim, and feeling as if somewhere over our shoulder, Jason is lurking, ready to strike. 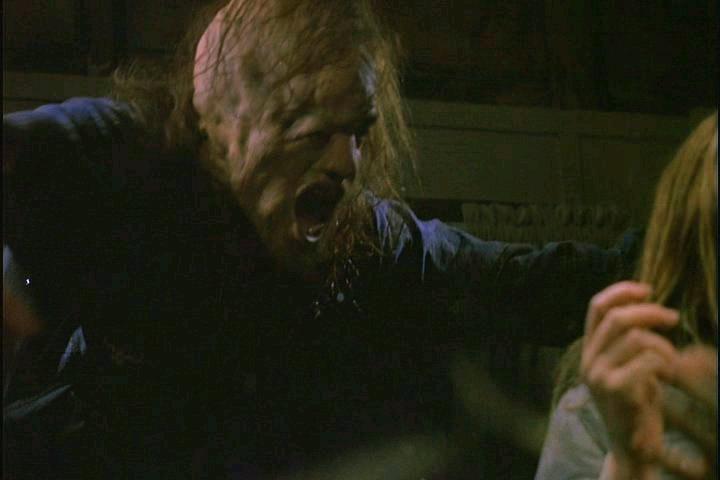 When Jason’s face is finally revealed, it is appropriately hideous; otherwise, the image of the character presented here, wearing a hood that makes him look like the Elephant Man, is hardly strong enough to have embedded itself in the public consciousness; it has long since been eclipsed by the familiar hockey mask he donned in the next sequel.  However, the depiction of Jason as a twisted, superstitious, murderous, but not completely inhuman man-child does yield some interesting results.
The film is notable for presenting a “Final Girl” who relies on something more than mere pluck to survive. Ginny (Amy Steel) is introduced – with all the subtlety of an exploding bomb – as a a girl majoring in child psychology. Since Jason’s psychology is that of a child (admittedly a homicidal one), this  leads to a fairly remarkable confrontation at the end, in which Ginny is able to use her knowledge to manipulate Jason. Trapped in a room that is obviously Jason’s shrine to his dead mother, complete with her severed head, Ginny disguises herself to convince Jason that she is Mrs. Voorhees, back from the dead and urging him to put down his machete now that his work is finished. The film here pulls off the neat trick of making Ginny seem clever and courageous under fire, while at the same time tossing just the tiniest bit of sympathy toward Jason, whose devotion to his mother is being used against him, creating a sense of betrayal.
Unfortunately, there was no doubt that FRIDAY THE 13TH PART 2 was going to be part of a franchise, so there was no way that the film would be allowed to work itself out to its logical conclusion – that is, Jason thinking he was being killed by his own mother (and the symmetry would have been appropriate, had he, too, died by decapitation). Instead, the film offers up the obligatory slasher cliche: Ginny, who up to now has shown signs of admirable intelligence, does not take advantage when the killer is down for the count, neglecting to deliver the death blow that will silence him once and for all.
Instead, there is another last-minute jump scare that is once again dismissed as a dream, leaving the audience not quite sure what has happened. (Exactly how much of the action is a dream is not made clear, leaving the fate of one victim up in the air – was he killed in “reality” or not?) Ginny, whose overall (though occasionally erratic) competence has earned her the right to dispatch Jason, is denied the opportunity. The film throws away a potentially satisfying ending, undermining its best sequence in favor of setting up a sequel.
Oh well, that’s show business. The nice thing about reviewing FRIDAY THE 13TH PART 2 decades after its original release is that, after the initial shock has worn off, it no longer seems like the work of a bunch of depraved sadists (not that it ever did -but the critics might have given you that impression at the time). It is a competently executed horror thriller that supplies the expected goods without apology for its own low ambitions and sloppy continuity.  Taken on its own terms, it is a success, and despite many absurdities (such as chick in tight shorts who grabs the wrong cheek when a horny guy sling-shots a pebble off her ass), there are even a few moments (e.g., the confrontation between Ginny and Jason) when you have to set aside your distaste for the cheesy slasher formula and admit that even a disreputable gorefest  can occasionally earn respect.

Several critics have noted certain similarities between the FRIDAY THE 13TH films and Mario Bava’s 1971 giallo murder-fest, BAY OF BLOOD. The most obvious occurs in PART 2, when a pair of lovers are impaled upon a bed by Jason, their death gasps replacing cries of orgasm. Virtually the identical scene takes place in BAY OF BLOOD – although, ironically, FRIDAY THE 13TH PART 2’s version is much less explicit, because of cuts demanded by the Motion Picture Association of America.
FRIDAY THE 13TH PART 2 (1981). Directed by Steve Miner. Written by Ron Kurz, based upon characters created by Victor Miller. Cast: Amy Steel, John Furey, Adrienne King, Kirsten Baker, Stuart Charno, Warrington Gillette, Walt Gorney, Marta Kober, Tom McBride.
FOOTNOTES: