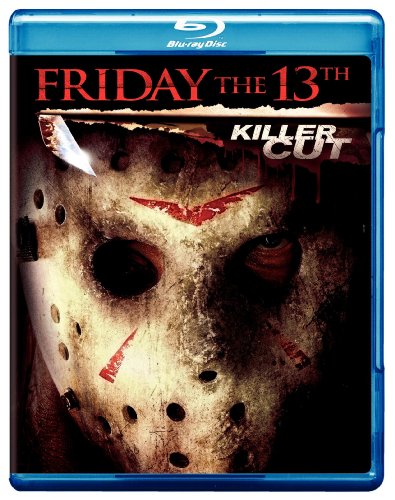 It’s a testament to the outrageous lengths that New Line Pictures had taken the FRIDAY THE 13TH series after acquiring the rights to the Jason character from Paramount, that there was nowhere to go but back to the beginning. JASON GOES TO HELL: THE FINAL FRIDAY transformed the summer camp-lurking mass murderer into a non-corporeal life form that takes possession of various bodies via a dark, viscous fluid. JASON X found Jason, unable to be executed using conventional means, being awoken from cryogenic stasis 500 years in the future by students on a science expedition from humanity’s new home, Earth 2. And the self explanatory JASON VS. FREDDY had New Line showcasing their two top in-house horror icons in a battle royale with each other, in a largely successful attempt to renew interest in both sagging franchises. Jason had long since become a bit of a joke, little more than a delivery platform for the creative output of makeup FX designers. It hadn’t mattered for a long time whether or not he had motivation for killing, or even if he was actually human; screenwriters twisted the legend like Silly Putty in order to suit the latest outrageous adventure.
In 2003, the same year that the case of Jason vs. Freddy was heard in cinemas, Michael Bay’s Platinum Dunes production company released its debut effort – a commercial-slick remake of The Texas Chainsaw Massacre. The company’s unofficial mission statement has it dredging up our ’70s horror heritage and purchasing remake rights whenever available, and as unappealing as this sounded, their Chainsaw remake wasn’t all that bad. While the young cast seemed like little more than a bunch of WB starlets filling up their summer hiatus (though we enjoy leering at Jessica Biel as much as the next fella) and it had to stoop to gore and extended scenes of torture to move its audience where the original relied on atmosphere and inference, original cinematographer Daniel Pearl returned to beautifully ease his sun-blasted, 16mm classic into the 21st Century tent of Michael Bay World, and whoever thought of bringing in R. Lee Ermey (whose character was a relatively new invention) deserves major praise.  A string of less successful remakes followed: a grim version of The Hitcher and a deadly dull Amityville Horror remake, wasting a too-young Ryan Reynolds in a role that he could have hit out of the park a few years down the road, were universally panned but smartly marketed (even the ultra-dopey Chainsaw prequel made a profit.)
It was probably inevitable that Platinum Dunes would set its sights on Friday the 13th as a remake-friendly project; for better or worse, it’s got one of the most iconic killers in horror film history and enormous name recognition, and the various films in the series are also notable for having little or no plot, and, frankly, when it was bad (and it was bad pretty often) it circled the nadir of modern horror. This all to say that we approached the recent remake – helmed by Marcus Nispel, late of Platinum Dunes’ Texas Chainsaw reboot – with as open a mind as is possible.

Unfortunately, one common factor in the Friday cannon is pretty bland cinematography. Things got more interesting once the series shifted to New Line (particularly Ronny Yu’s beautiful shot Freddy vs. Jason) but there’s something wrong when even the spaceship-set Jason X is shot as blandly as a Sci-Fi original series. Nispel made his bones in the commercial & music video world where his work is rightfully acclaimed. His Friday the 13th is richly colored, with deep forest hues creating a nicely creepy atmosphere.
We also liked the approach that the screenwriters took when it came to which aspects of the series would be carried over; we get some of the creepy, mongoloid Jason from the first film (though only in the “Killer Cut”, but more on that later). We get some of the canvas bag-wearing Jason from Part II (the most frightening, in our opinion) and, of course, the ubiquitous hockey mask.
Nispel is also quite good at creating suspenseful set-pieces, particularly a very disturbing kill early on involving a sleeping bag and a bear trap. We also liked the opening gambit involving what can best be described as a decoy group of hikers, which leads us to…
What’s not so good? (Spoilers ahoy)
The film opens on a group of kids who unknowingly tread onto Jason’s turf while looking for a magical forest of marijuana (not kidding.) It is a bit shocking when nearly the entire group is killed off after 20 minutes and we get the title card, which was a nice touch.
The problem is that the second group – gathered for a weekend party at the luxury cabin of ultra douche bag, Trent (Travis Van Winkle) – is far less interesting than the first group. Stopping off for supplies, they meet Clay (Jared Padalecki, from the WB’s Supernatural) who’s searching for his missing sister, Whitney (Amanda Righetti) who had been among the first group. Also along for the weekend are fun-loving Nolan (a Mathew McConaughey lookalike), his girlfriend Chelsea (Willa Ford), the slutty Bree (Julianna Guill) and, for the sake of racial diversity, Lawrence (Arlen Escarpeta) and Chewie (Aaron Yoo).
The inclusion of the latter two perfectly represents the fatuous notion behind too many studio decisions, which allow marketing reports to trump realistic casting decisions. And, though this might fall under the ‘personal preference’ column, we strongly disliked the notion of underground tunnels running beneath Crystal Lake. Now, maybe we missed the scene where the existence of these was explained, but unless there was a large precious mineral find in the Crystal Lake area, their presence seems highly suspect. Its obvious purpose was to give Jason’s seemingly miraculous comings and goings a practical explanation, but it doesn’t do much for Jason’s mythic status to imagine him carefully scaling up and down decades-old mining company ladders (and come to think of it, wouldn’t this just take up more time than less?) It also allows for a dungeon of sorts in which Jason can keep Whitney captive – an odd, unusual plot point that simply does not fit in the Friday world. This dubious machination comes courtesy of director Nispel, for whom its inclusion was the only requirement in screenplay submissions.
There are doubtlessly fans who love the notion of Jason setting the sort of elaborate booby traps that would make Wile E. Coyote jealous, but we always felt that his presence was most terrifying when he was just a garden variety, mass-murdering backwoods mongoloid without an ACME charge account.

New Line’s Blu-Ray is quite lovely to look at, featuring deep, inky blacks that really bring out the woodsy atmosphere. The color scheme is a bit more muted than some might expect, but that was clearly the intent of the original cinematography and reproduced faithfully here.
There’s a 9 minute difference between the theatrical version and the “Killer Cut” on DVD and Blu-Ray. It appears to be mostly a matter of scene extensions, with several gorier kills (particularly the aforementioned sleeping bag scene) and quite a bit of added nudity, which significantly extends the screen time of Julianna Guill and her breasts. There are also a few isolated moments with Jason, including a shot of him sharpening his machete that was included in the trailer but dropped from the theatrical cut, and a few glimpses of him witnessing the beheading of his mother in the opening scene, which reenacts the conclusion of the original film. (Sharp-eyed fane of Deep Space Nine will recognize Nana Visitor as Mrs. Voorhees.) The makeup on young Jason in this scene is kind of silly, and it was probably a smart cut.
The disc also features 3 additional scenes, including an alternate version of the moment where Jason first finds his hockey mask that is demonstrably better than what wound up in the film.
The Rebirth of Jason Voorhees discusses the work that went into the redesign of Jason for 2009, including clothing, makeup and masks.
Exclusive to Blu-Ray are Hacking Back/Slashing Forward, which is little more than the cast and crew talking about how much love and respect they have for the original film, along with a collection of seven mini-featurettes on the death scenes.
Making up for the absence of an audio commentary is something called a Terror Trivia Track which runs concurrently with the film.
[serialposts]