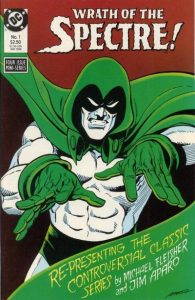 Deadline reported that the FOX Network has optioned the DC Comics supernatural hero The Spectre as a potential TV series.
Brandon Camp (JOHN DOE) has been commissioned to write the script and if greenlighted, executive produce  along with Bill Gerber (QUEEN OF THE DAMNED).
The Spectre was created by artist Benard Bailey and writer Jerry Siegel (co-creator of Superman). Debuting in More Fun Comics #52 in 1940.
The Spectre was originally the ghost of murdered police detective Jim Corrigan, permitted to return to a kind of life and required to function as a supernatural crime-fighter. 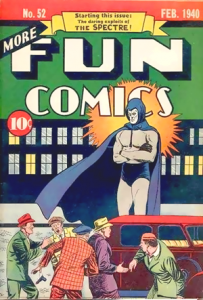 In more recent years, DC has presented The Spectre as a kind of Avenging Angel or non-corporeal spirit, the very personification of  Vengeance. He’s now considered  an immortal  being who only possessed the resurrected body of Corrigan, and later inhabited the bodies of former Green Lantern Hal Jordan (ridding him of his possession by Parallax) and Crispus Allen, a Gotham City policeman( killed by a police technician coincidently named Jim Corrigan —though not intended to be the Golden/Silver Age character).

He’s been a part of The Justice Society, and sometimes comes to the aid of other superheroes when they are faced with occult forces.  Without regularly uniting with a human host, The Spectre can lose all sense of perspective and become increasingly harsh, erratic,  cruel and violent.
Thus far. The  Spectre has only appeared in animated form, such as in BATMAN: THE BRAVE AND THE BOLD, voiced by Mark Hamill, and the  DC SHOWCASE: THE SPECTRE solo short, voiced by Gary Cole. (Included on the JUSTICE LEAGUE: CRISIS ON TWO EARTHS DVD.)
Warner Brothers Television and Gerber Productions will produce, should Fox commission a pilot or series.