May be the best comic book movie ever.

Here it is, straight up. Mark Hamill has always been the best Joker there ever was, ever. Until now. This means it’s pretty safe to say that just about all you’ve heard regarding the late Heath Ledger (the upcoming THE IMAGINARIUM OF DOCTOR PARNASSUS) and his performance in THE DARK KNIGHT is true. The young man was driven in his role in a manner that Jack Nicholson could only dream of. But then, 1989’s BATMAN didn’t allow for such a sick, twisted, dark, maniacal take on the character. Let’s face it, the ‘80’s/’90’s versions of the beloved caped crusader were…well, a joke.
No one was more excited than I when BATMAN finally hit theaters back then. However, in watching the film my jaw steadily crept closer to the floor of the theater in stunned disappointment. Then I wound up hearing how Tim Burton (SWEENEY TODD) and company had finally gotten the Batman universe right, and how marvelous Nicholson was as the Joker. Huh? What? The film’s story was silly and paper-thin, and Nicholson was doing little more than clowning around.  Oh, there were moments to be impressed by, but the whole of it still amounted to a dark cartoon.
Now, finally, after all these years, perhaps people will no longer look at me so cockeyed when I mention what a missed opportunity that film was. Because people will look at THE DARK KNIGHT and agree: this is what the Batman universe was meant to be. BATMAN BEGINS did a nice job of setting everything up, but with THE DARK KNIGHT our immersion into the dark, complex world that Gotham City inhabits is full and intense. With just a few caveats, this film may well be the best comic book movie ever made. (SPIDER-MAN I & II and IRON MAN are right up there, too.)  I wish Bob Kane was alive to see this incarnation of his creation.
Christopher Nolan’s (MEMENTO) direction is smooth and well-controlled. I thank him for letting us see most of what occurred during the action sequences. He had a firm concept of what he wanted, and every creative element was set to a very high level. Production design, editing, costuming, make-up, and the music score all work in wondrous synchronicity to offer the viewer a very rich experience. I applaud every creative member of that team. 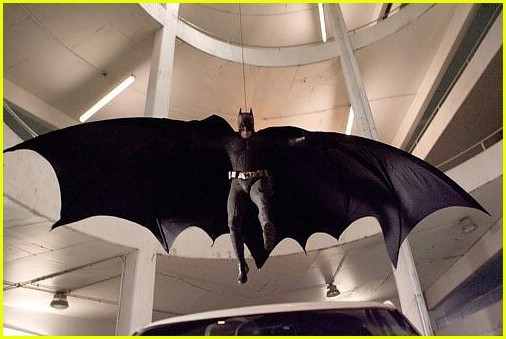