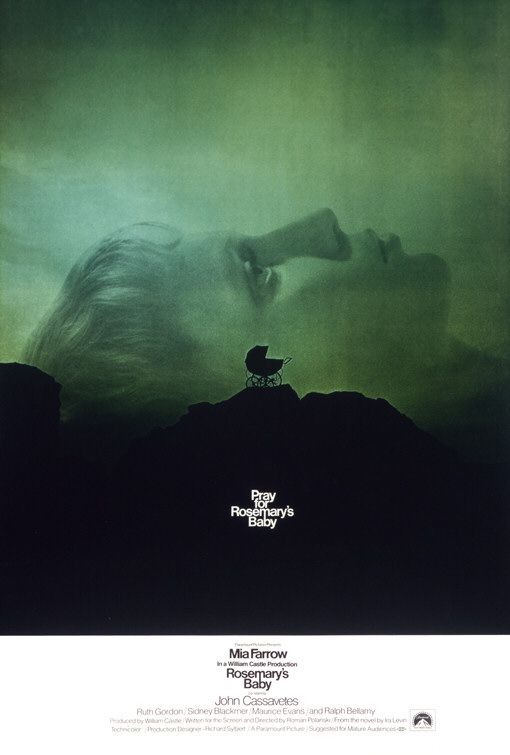 Writer-director Roman Polanski’s adaptation of Ira Levin’s novel has earned a reputation as one of the greatest horror films ever made. It is easy to understand why: this is a serious effort that gradually and carefully constructs a mounting sense of paranoia that climaxes in a horrible final-scene revelation. The setting and performances are completely credible; even the basic plot line (a woman undergoing a difficult first pregnancy) has an everyday believability that invites audience identification. In short, ROSEMARY’S BABY transcends its genre trappings: viewers are not allowed to sit back and enjoy a pleasant roller-coaster thrill-ride; they are lured into the plot and set them up to be terrified and disturbed by the unfolding events And yet, despite these undeniable strengths, the film is too deliberately paced and ultimately too tame to completely justify the high regard in which it is held. It’s a horror film for people who want to be scared – but not too much.

Despite being based on a best-selling novel, Polanski’s film actually seems inspired by THE SEVENTH VICTIM (1943), a Val Lewton production about Satanists living in modern New York City. ROSEMARY’S BABY begins with Rosemary and Guy Woodhouse moving into a New York apartment, which was split off from a much larger apartment. The previous tenant died after lapsing into a coma but not before mysteriously moving a huge piece of furniture in front of a closet (which, we learn much later, hides a door leading into the other half of the apartment from which this unit was split off). Rosemary meets Terry Gionoffrio (Victoria Vetri), who lives with Roman and Minnie Castevet (Sidney Blackmer and Ruth Gordon) in that very unit; soon thereafter, Terry dies from a fall out the window. The Castevets invite Rosemary and Guy over for dinner; Rosemary has a strange dream in which she imagines being ravished by the Devil, and soon Guy’s acting career is taking off. Strange developments disturb Rosemary; her friend Hutch (Maurice Evans) tries to warn her, but he too lapses into a coma and dies, although not before sending her a book about witches. After reading it, Rosemary becomes convinced that the Castevets are witches who plan to sacrifice her baby in some kind of ceremony.
Rosemary seeks help, but her husband and her doctor are in league with the Castavets. After being sedated, Rosemary wakes up to find her pregnancy terminated; Guy and her doctor insist the baby died, but Rosemary hears crying through the wall. Using the door hidden in the closet, she sneaks into the Castavets apartment and finds that the Castevets — and many others, including a visitor from the east, bearing gifts — are not sacrificing her baby but worshipping it. Rosemary screams when she sees her baby’s eyes, but Roman Castevet tells her the child has his father’s eyes — his father being Satan. Rosemary is shocked to learn that her child is destined to be the anti-Christ, but her maternal instincts take over and she decides to mother the child…

One of the problems facing ROSEMARY’S BABY today is that we all know the surprise ending, so much of what proceeds it feels like an extended prologue to the brief revelation of horror in the finale scene. What keeps the story somewhat interesting is that it is laid out like a paranoid thriller that, in retrospect, leaves open the question of whether or not anything supernatural really has occurred. Yes, the coven really believe that Rosemary’s baby is the child of Satan, and they convince Rosemary of this, but is there really any reason to believe they are correct?
The film even emphasizes the weakness of the supernatural explanation in a scene wherein Rosemary seeks help from a doctor and babbles out a litany of her suspicions — which sound like crazy ramblings that add up to nothing. To a certain extent, the film plays off the sense that Rosemary’s condition, with all the hormonal changes that go with it, may be leading to mood swings that cause her to succumb to paranoia.
Of course, ultimately her paranoia turns out to be justified — at least to the extent that she is the victim of a conspiracy, but whether or not it is supernatural in nature is not definitively clear. Rosemary dreams of being ravished by the Devil, but that is clearly the result of a chalky-tasting drug slipped into a dessert made by Minnie Castevet; the subsequent problems with Rosemary’s pregnancy, including her child’s appearance, might also be a result of the strange herbal concoctions that Minnie feeds her for ninth months. A couple people die while in comas, and another loses his sight (so that Guy can take his place in an important acting role), but those could be mere coincidences, caused by natural causes; or (recalling Minnie’s herbal remedies) they might even have been the result of some kind of poison.
The film’s two highlights are Rosemary’s dream sequence and the ending. The former is a marvelous piece of surrealism in the manner of the best of Luis Bunuel: dissolves linking disjointed scenes on a yacht with tracking shots of religious imagery, segueing into presumably “real” scenes of Rosemary being tied down by the Castavets’ coven so that Guy can mount her — only close-ups of Guy’s hands and eyes give way to briefly glimpsed scaly claws and burning red orbs.
And the final scene carries a wonderfully twisted sense of triumphant evil that is genuinely disturbing. The crib shrouded in black, with an upside-down cross dangling from it, is a memorable image, and not actually showing the title character is a brilliant stroke of subtlety that allows the audience to conjure its own mental images (the only hint we’re given is a brief flashback to the red eyes that Rosemary saw in her dream earlier).
There is a certain touch of black humor in the proceedings that underlines the horror (as in the Biblical account of the birth of Christ, there is a magi-type character bringing gifts from the east). Whether or not Rosemary’s Baby is in fact the anti-Christ who will sow death and destruction, the exuberant joy of the coven is terrifying, and it is tragic to see Rosemary becoming one of them, at least to the extent of agreeing to raise the child.
In the end, ROSEMARY’S BABY still works because it takes a character in an identifiable and relatable situation (going through pregnancy and all the concerns that entails) and magnifies it to horrific proportions. The realistic situation lends the film a sense of credibility lacking in most horror stories, which is maintained by presenting the supernatural interpretation in an ambiguous way.

Although ROSEMARY’S BABY is adapted from a novel, its story bears striking similarities to Roman Polanski’s other films:

This was the first Hollywood film directed by Polanski, who had made a name for himself in Europe with such films as KNIFE IN THE WATER, CUL-DE-SAC, REPULSION, and DANCE OF THE VAMPIRES.
The film’s producer, William Castle, purchased the rights to the Ira Levin novel with the intention of directing the film himself, but Paramount Pictures balked, insisting the Polanski direct instead. Castle had directed several entertaining horror films (such as THE TINGLER and THE HOUSE ON HAUNTED HILL, both with Vincent Price), but his style was campy and gimmick-laden — the antithesis of the serious approach employed by Polanski.
When Rosemary meets Terry Gionoffrio, she apologizes for staring, explaining that she mistook Terry for an actress named Victoria Vetri. In fact, Terry is played by an actress named Victoria Vetri  – although at this point in her career, Vetri was credited under the stage name Angela Dorian. Reportedly, Polanski asked her why she was using the name of a sunken ship – referring to the ill-fated Andrea Doria, which collided with another vessel and sank on July 25, 1956. Under her real name, Vetri (who was also a Playboy Playmate of the Year) later appeared in WHEN DINOSAURS RULES THE EARTH and INVASION OF THE BEE GIRLS (written by Nicolas Myers) before her career faded out.
ROSEMARY’S BABY (1968). Directed by Roman Polanski. Screenplay by Polanski, based on the novel by Ira Levin. Cast: Mia Farrow, John Cassavetes, Ruth Gordon, Sidney Blackmer, Maurice Evans, Charles Gordon, Victoria Vetri.