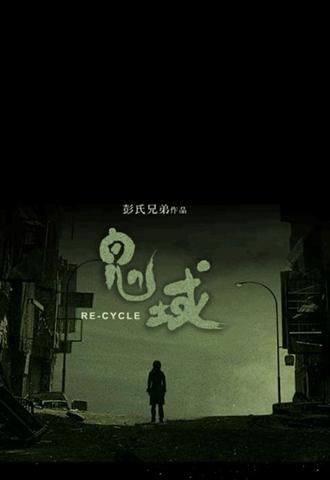 The intersection between Fiction and Reality has provided an excellent starting point for artistic exploration, at least since Jorge Luis Borges, and here the Pang Brothers use it to reorient a career that has drifted off track since THE EYE (2002). That memorable ghost story was one of the few Asian horror films (along with the JU-ON series) that could keep pace with RING, the film that opened up a whole new territory back in 1998. Since then, the Pang Brothers have given us two disappointing sequels and an equally disappointing American debut, THE MESSENGERS. Now, with their most recent trip to the realm of supernatural horror, they attempt to prove – with some success – that they have not completely lost their way. RE-CYCLE begins in familiar territory but seeks to discover previously unexplored pathways sheltering unfamiliar frights. If, in the end, the trip rambles aimlessly through some dull patches, you have to admire the Pang’s effort to boldly go somewhere new.
Angelica Lee plays Tsui Ting-Yin, a best-selling author of romance novels, apparently based on her real life. Switching gears since her affair with a married man fell apart and ceased providing inspiration, she is currently writing a horror novel titled Re-cycle. Her life grows complicated when her ex-lover returns, seeking a reconciliation that holds no interest for Ting-Yin. Life begins to get creepy when events begin to mirror she is writing – although it is not altogether clear whether her novel is coming to life or life is inspiring her novel. Eventually, Ting-Yin finds herself in a perplexing parallel world that seems to be less the novel she is writing than the discarded pages she threw away. Lost and confused, she gains assistance from an old man and a young girl who help her find her way to back to her world.


RE-CYCLE is at its best during the first half. The screenplay introduces a series of interesting themes and plot elements that could have seemed muddle but actually synthesize quite nicely. We are introduced to Ting-Yin at a press conference where a film adaptation of one of her novels is screening, and the insipid saccharine tone of the film-within-a-film seems like a not so subtle dig at the romance genre. RE-CYCLE, itself a part of the horror genre, thus comments on the relative weight and importance of different forms of popular entertainment, implying that Ting-Yin’s switch of subject matter – though it may be disappointing to fans – is definitely a step up.
RECYCLE also raises questions about the importance of the relationship between life and art. Ting-Yin’s romance novels are apparently thinly disguised autobiographies, and she seems incapable of writing a new one since her affair ended. But how can she hope to write a horror novel if she depends on her life for inspiration? This is a theme that Hollywood loves to explore, in films ranging from KAFKA to SHAKESPEAR IN LOVE, implying that creative people are not really creative; they are simply recycling their live into their art. RECYCLE takes a dim view of this theory, implying that it is a dead end leading to creative stagnation, which can be dispelled only by some form of legitimate creativity.
At least, that seems to be the direction the story is heading, with the unexpected intrusions of the supernatural playing out like metaphors for sudden flashes of inspiration. The Pang Brothers know how to stage this kind of material perfectly, and the early scenes of Ting-Yin bedeviled by phantoms – possibly of her own creation – are wonderfully calibrated send your skin crawling with dreadful anticipation. They are all the more effective because we know we are not seeing traditional ghosts (the souls of the dead) but a glimpse of an alternate reality – a force as strong and intriguing and ultimately irrational as the unleashed imagination can be.
When Ting-Yin goes down the metaphoric rabbit hole and finds herself within the alternate reality that had previously been only impinging on her life, the film seems poised on the cusp of a bold new world – a vivid, modern approach to cinematic horror. Initially, the production design and special effects combine to depict an unnerving vision of an imaginary world, at once solid and incomplete; in effect, is is the perfect realization of what an author’s imagination might produce – all the surfaces in place but without the supporting infrastructure of reality.

Unfortunately, the intriguing premise of an author trapped in her own imaginary world is not only dropped but outright rejected. At first, the film hints that the fragmentary nature of the world is due to it being made up not of Ting-Yin’s finished work but of her discards – the crumbled pages she tossed into her waste basket. Then she meets an Old Man who says that she is not the sole author of this world, and from that point on there is little or no further effort to explore the themes the film has been developing.

Since Ting-Yin is not in a world of her own making, the collision of reality and art is lost, and the story bogs down in a familiar swamp: finding a way back home. The author is not going to meet characters she created and confront the consequences of her creative decisions; she has not special knowledge of the territory based on having pre-visualized it in her mind. Angelica Lee remains a sympathetic and engaging presence (as she was in THE EYE), but she is stuck playing a woman who is simply lost and helpless, relying on the Old Man and, soon thereafter, a young girl to help her on her way. The path she takes is full of obstacles, but they do little to illuminate her character or the film’s themes. Instead, they build up to a rather predictable “surprise” revelation that relates back to Ting-Yin’s terminated affair. (Once the subject of abortion is raised, the identity of the little girl is so obvious that revealing it would hardly count as a spoiler at all.)
Part of RE-CYCLE’s joke at the expense of the Romance genre is that the Pang Brothers like to insert love stories into their horror movies, in order to add some dramatic weight to the scares. They have yet to figure out how to balance these elements properly. As in THE EYE 2, a terminated affair provides the back story for the heroine, but each woman’s inability to deal with the situation emotionally makes her less sympathetic than simply pathetic. Pregnancy also plays a big role in both films, suggesting that the only cure for a failed affair is to sublimate romantic yearnings into the traditional female role of Motherhood. This is not quite an admonishment that women should stay home and have babies, but there seems to be no doubt that Ting-Yin would have been much happier – or at least less guilt ridden – if she had seen her pregnancy through.
As a thematic statement, this is more appropriate for a Republican political convention than a film exploring the overlap of reality and imagination. To be fair, the title is “Re-cycle,” and the story is at least partly about being confronted by ideas and actions that were discarded on the way toward reaching one’s destination – especially if that destination was not the one originally intended. But even on these terms, the message is ridiculous, suggesting that we should feel guilty for every discarded item in our lives. Apparently, the only happy people are pack rats who horde every piece of junk they ever owned. Who knew that clutter was the path to enlightened joy?

Thankfully, the Pang Brothers visual skills never fully desert them. Even as the script wanders through dramatically barren territory, the directing duo find horrifying highlights that work as memorable set pieces, including an attack by zombie-like hordes near the end of the road – who appear to be three-dimensional beings when viewed head on but are revealed to be just two-dimensional figures when seen from the side (again, emphasizing that this world is made up of bits and pieces of fictional creation, without much real substance to it).
When Ting-Yin gets back to her reality, the Pangs even manage a halfway decent twist ending. It is not exactly inspired, but at least it relates to the themes of Fiction-vs-Reality introduced in the first act. It is as if the Pangs realized, while attempting to blaze a new trail, their third-act had wandered off the map into territory that was not only uncharted but also uninteresting; and, as a consolation, they send their audience a last-minute post-card from the originally intended destination. It’s too little, too late, but they deserve credit for trying to get back on course..