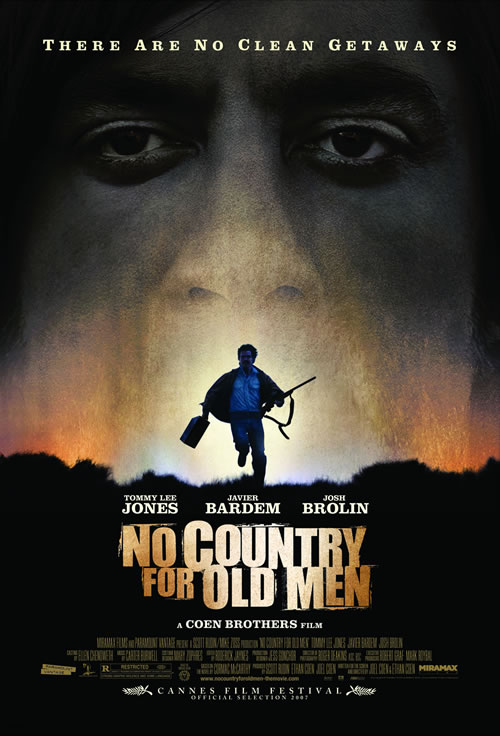 If you haven’t yet seen NO COUNTRY FOR OLD MEN, then I’m going to tell you right now that Anton Chigurh is every bit as frightening as Freddy Kruger, Michael Myers, or Jason ever dreamed (pardon the Freddy pun) of being. As Chigurh, Javier Bardem (BEFORE NIGHT, for which he became the first Spanish actor ever to be nominated for an Academy award) plays one of the most disturbing film characters I’ve seen in many a moon. I’m not normally affected by the portrayal of murderous film villains all that strongly, but this guy had my stomach in a knot. And I do mean this as a compliment.
In many ways NO COUNTRY FOR OLD MEN is a good old fashioned horror film with a fear factor not unrelated to the aforementioned beloved creepers. There isn’t even all that much dialogue in many segments, which means much of what affects audiences is the film’s frightening mood. So for those of us who may have lamented the fact that horror films always get snubbed come award season, I say take heart. NO COUNTRY has now made up for that to some degree. In fact, Javier Bardem’s character has more than a little in common with Rutger Hauer’s interpretation of his character John Ryder (get it?) in 1986’s THE HITCHER. Hauer’s performance was underrated then (heck, almost completely ignored in many circles), but one can now more easily see what he brought to his role that set up the film for the 2007 remake – which failed in part because it missed the Hauer element. I think in some ways, Bardem’s performance lends credence to a performance like Hauer’s.
So horror fans, be of good cheer: if NO COUNTRY can be considered a horror film in at least to some degree, then it is the first to knock the ball out of the park with the Oscars. This year it leads the pack along with THERE WILL BE BLOOD (another film that’s frightening in its own right) with eight Oscar nods. And both films have been nominated for best picture. Though best adapted screenplay may go to BLOOD over NO COUNTRY, my bet is that NO COUNTRY will take the best picture title, and Javier Bardem will walk away with a best supporting actor nod for his chilling performance in the film.
Now, admittedly, NO COUNTRY isn’t for everyone. But then again, no film by the Oscar winning Coen brothers has been. Now, I should confess here that I’ve had a soft spot in my heart for the brothers Coen, Joel and Ethan, since their BLOOD SIMPLE days. Still, that in no way negates the fact that this is one solid piece of work. It’s frustrating as all get out at times, but extremely potent…and layered.
I don’t like to give away much of a given film’s plot, mainly because I like to go into a movie as fresh as I can (as a youngster I was crushed when I accidentally learned all the juicy details of THE EMPIRE STRIKES BACK before I saw the movie), but I will say this – the plot centers around a drug deal that went very, very, very wrong. Josh Brolin (AMERICAN GANGSTER) consummately portrays South Texas man Llewelyn Moss, who stumbles across the crime scene and a couple million dollars, which he decides he may as well try and benefit from. But Anton Chigurh, among others, is bent on retrieving the cash. That’s not all that drives this frightening—and intelligent—soul, but the rest I will leave for you to discover. If he doesn’t give you the willies though, there’s something wrong with you.
The film does have a gloriously quirky sense of humor, however, and on that note I don’t want to leave out Tommy Lee Jones (IN THE VALLEY OF ELAH), another Oscar winner who gives one of his very best performances here as Sheriff Ed Tom Bell. On the surface, this seems like the type of role he could do in his sleep—and it kind of is—but in this instance he brings a great deal of nuance to his character. It’s truly a pleasure to watch him and to feel the poignancy underneath that surface.
One of the fascinating, and frustrating, elements of this film is the manner in which it hits the viewer with the randomness and unknowable aspects of life. In fact, I defy anyone to claim that they were able to predict the film’s ending. The last third of the picture is a head cocker by anyone’s standards. And the entire piece is full of disturbing (and time appropriate?) images. Sheriff Bell even laments the passage of the previous way of life, in which a law enforcement officer might choose to wear no gun at all, but in the present environment he has to send a young unrepentant teenage boy to the electric chair for the cold blooded murder of a girl simply because he sought the thrill of killing her. Yet the man he’s searching for now makes that teenager seem like a choir boy.
In the modern era this truly does seem to be “no country for old men.” 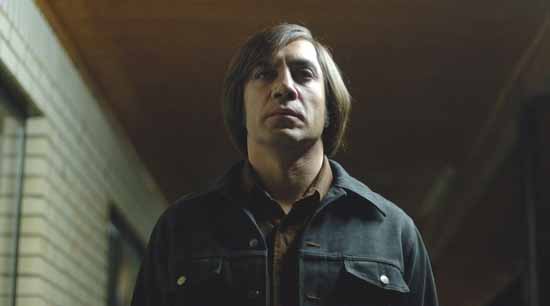