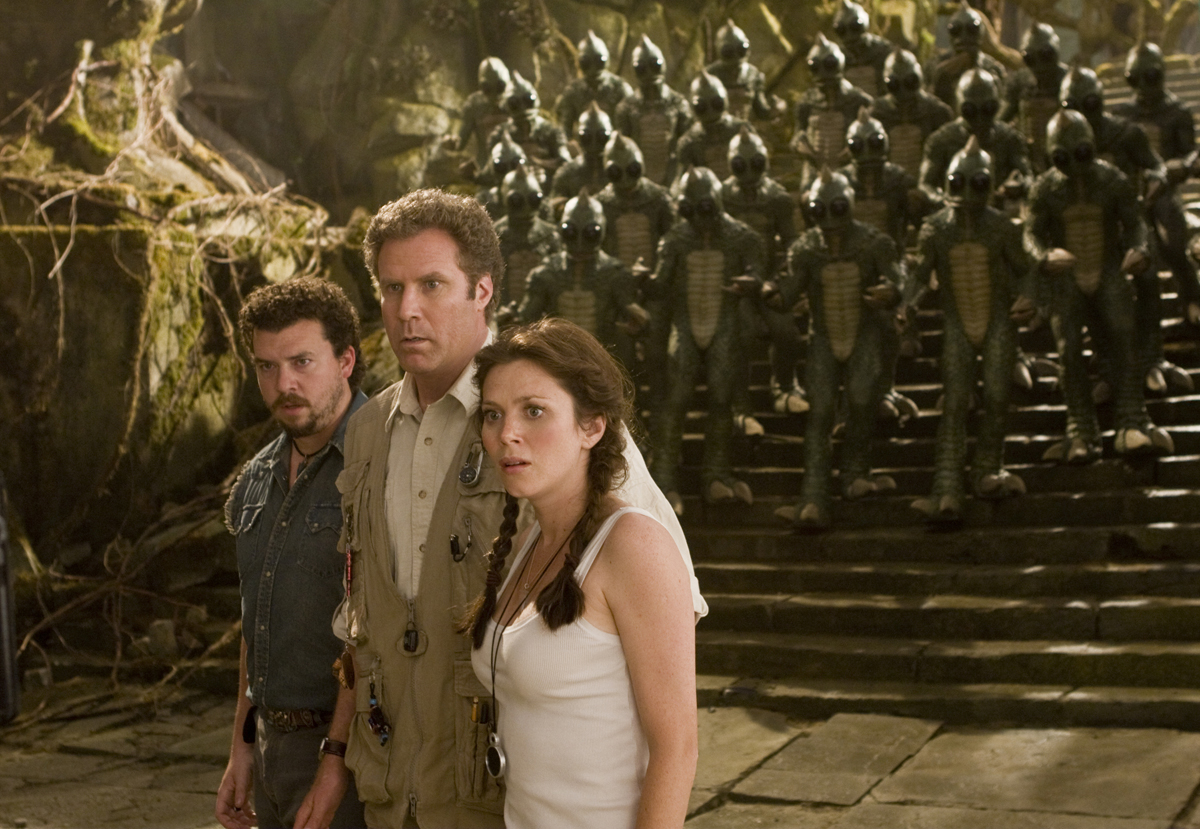 When it comes to putting dinosaurs on the screen, Universal is certainly the studio that knows how, and in LAND OF THE LOST the dinos do not disappoint, thanks to the wonderful creature design work of Crash McCreery (who worked on all three JURASSIC PARK movies) and effects supervisor Bill Westenhofer (THE LION, THE WITCH AND THE WARDROBE).  They were all ably assisted by a very large effects crew,  including over 30 key animators who toiled away under Rhythm and Hues animation supervisor,  Matt Shumway.
Which makes thinking about all the animation Ray Harryhausen accomplished in each of his movies, entirely on his own, truly astounding!
Unfortunately, the comic premise which delivers Will Ferrell and his two cohorts into this “Land of the Lost” is mostly of a standard issue variety, making the film susceptible to the same charges that always plagued Harryhausen’s films:  “The animated creatures are great, but the acting and script are nothing to get excited about.”
Actually, the first half of the movie works quite well, and is not nearly as bad as it might have been, since as soon as Ferrell lands in the alternate universe we are treated to an fearsome T-Rex, whose immediately pursues the explorers across a great chasm into a conveniently located cave.
From there, we get a truly surreal series of landscapes provided by production designer Bo Welch (a favorite designer for both Tim Burton and Mike Nichols),  almost as if the trio of adventurers had stepped into a live-action version of Bob Clamplett’s delightfully subversive 1938 WB cartoon, PORKY IN WACKYLAND.
Helping enormously in these scenes is the  location work done for  at Dumont Dunes and Trona Pinnacles, in the California Desert National Conservation Area, near Death Valley that mixes quite nicely with the huge studios sets built on the stages at Universal.  However, what works in a 7- minute cartoon is much harder to sustain over the course of a 100-minute movie, and as a result, the second half of the movie suffers accordingly, since  it soon becomes clear the filmmakers are willing to allow anything to occur for the sake of a gag, even if it’s a gag that doesn’t really work.  Such laxity tends to makes the laughs become less infrequent as the film proceeds from one disjointed episode to the next, until Will Ferrell’s final encounter with the T-Rex (named Grumpy), becomes so totally absurd it actually makes things less funny than if they they had just played it straight.
Presumably, this kind of “anything goes” comedy would have worked  if there were actors like The Marx Brothers on board for the ride, but needless to say, Will Ferrell and his partners are simply not comedians on that rarified level, so are unable to elevate such slight situations and material beyond the routine.
However for all Dino fans, there are several impressive CGI scenes involving a a whole rookery of Pterasour eggs that are about to hatch, a heard of small Compsognathuses, some Velociraptors hungry for either ice cream or the ice cream vendor, and perhaps best of all, a male and female T-Rex team,  one of which is colored red so it can easily be distinguished from it’s mate, who meets an explosive end.
[serialposts]