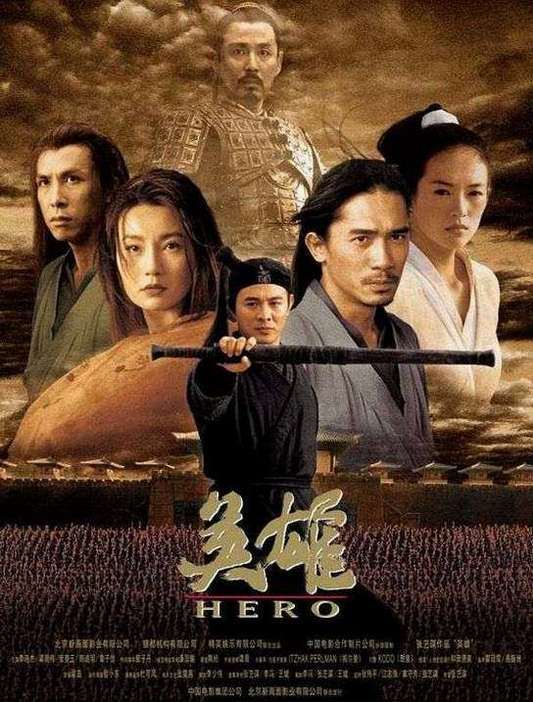 HERO is one of the best films of its kind and one of the most beautiful films ever made. A martial arts Fant-Asia costume epic, the film’s storyline edges closer to legend than history, and its displays of impossible fighting skill (swordsmen running on water, bouncing off treetops, floating through the air) pushes it into outright fantasy territory. The closest point of comparison for most American audiences will, of course, be Crouching Tiger, Hidden Dragon, but HERO may be an even finer achievement. Its plot may not have the same broad appeal (although it too includes a love story), but HERO director Zhang Yimou stages every scene with a grandeur and beauty beyond the relatively mild approach of Ang Lee.
Set in pre-unified China, at a time when a king’s armies have been conquering local provinces and bringing them under his rule, the story uses a RASHOMON-type narrative device of having its events narrated by a nameless hero (played by Jet Li, he is literally called “Nameless”), who is invited to the royal castle after slaying three assassins who had dedicated themselves to killing the king. For this, he is rewarded with gold, land, and the privilege of sitting within ten paces of the king. Nameless explains how he defeated the assassins Sky (Donnie Yen), Flying Snow (Maggie Cheung), and Broken Sword (Tony Leung), but the story does not add up for the king, who offers a different version: the assassins sacrificed themselves, allowing Nameless to kill them so that he would win the privilege of getting within ten paces of the king—close enough to assassinate him. The king may be correct, but Nameless hesitates to take advantage of his opportunity. Instead, he tells a third version of events, in which Broken Sword, who has attained a kind of enlightenment through years of dedication to calligraphy, advises him to assassination attempt.
Initially, the story-telling device seems like an excuse to string together several fight scenes, and Nameless polishes off the three assassins so quickly that you wonder how the filmmakers will stretch their tale to feature length. Once the alternate versions of events emerge, however, the complications serve to deepen and enrich the story. What started out looking like a simple action flick turns into a wonderful drama, with characters acting out of complex, contradictory motives. Much of the conflict emerges from the love affair between Broken Sword and Flying Snow, the latter of whom remains dedicated to revenging herself upon the king for the death of her father even after her lover has renounced the mission. This love story is not as central to the film as the one in Crouching Tiger, Hidden Dragon, but it goes a long way toward investing the events with operatic-style melodramatic emotions, in keeping with the virtuoso displays of visual style.
This is a film in which every fight is layered beneath falling rain, wind-blown flower petals, or whirling curtains—a colorful feast for the eyes that should appeal even to those who do not appreciate martial arts films in general. By now, it’s become a cliché to say that Chinese actions scenes are staged like a well-choreographed ballet, but this is a film that lives up to that description and then some. Unlike the action in the KILL BILL films, the floating wire-work and slow-motion stunts are not just visceral display of action prowess; they create a hypnotic dance in which every move expresses some part of each character’s soul, revealing as much about them as any intimate dialogue ever could. This is a film that wants you to cry, not cheer, when a fatal blow is struck, and it succeeds.
If there is a flaw in the film, it is that the narrative structure, showing multiple versions of past events, grows slightly repetitious. By the time the film abandons this story-telling device and wraps up its loose threads, showing us the actual conclusion of events, the story almost feels as if it is extending itself one or two scenes too far: When we see the final battle between Broken Sword and Flying Snow, still quarreling over the mission to kill the king, it’s almost a replay of the imagined confrontations shown before—and that’s still not the end of the movie, with yet another scene detailing the fate of the film’s Nameless Hero.
Even here, however, the film manages a heartfelt, tragic conclusion that resonates deeply with the viewer, redeeming any narrative weakness. HERO is an action film, but it is much more, attaining a kind of grandeur that Troy wanted but only partially achieved. Even if you’re not interested in fancy swordplay, the bold colors and big emotions will win you over.

The film created a small controversy when it was released, based on the accusations by some that it conveyed a pro-communist message. Read more here.
Yimou Zhang followed up HERO with the even better HOUSE OF FLYING DAGGERS.
HERO (a.k.a. Ying Xiong, 2002). Directed by Yimou Zhang. Written by Feng Li, Bin Wang, Yimou Zhang. Cast: Jet Li, Tony Leung, Chiu Wai, Maggie Cheung, Ziyi Zhang, Daoming Chen, Donnie Yen.
[serialposts]