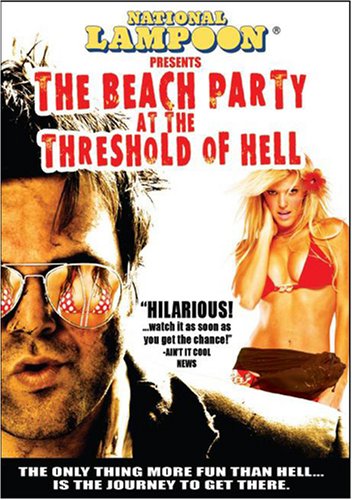 The title suggests a spoof of flicks like HORROR OF PARTY BEACH or at least something along the lines of Lucio Fulci meets Frankie Avalon and Annette Funicello; instead BEACH PARTY AT THE THRESHOLD OF HELL is a tongue-in-cheek low-budget futuristic fantasy about a small group of survivors trying to jump start “New America” two decades after nuclear annihilation. The film arrives on DVD with a bit of a buzz attached. It screened at Los Angeles film festivals in 2006, where the poster featured a laudatory quote from  USA Today’s Scott Bowles, calling it a “visual stunner” combining elements of Quentin Tarantino and MAD MAX, and now the DVD arrives with misleading cover art and an enthusiastic blurb from Ain’t it Cool News, which deems the film “Hilarious!” Unfortunately, BEACH PARTY fails to justify the hype.BEACH PARTY clearly has a clever strategy in mind, which is to adopt a  matter-of-fact tone toward its outrageous situations. In a clever framing device the film, although set in the future, is presented as past history, with the main action intercut with interviews and/or narration from “historians” offering their insights as if the film were a documentary recreation.
Sadly, this good idea is not enough to sustain the film. The blase approach to the action wears thin from overuse, and the pacing is interminable. The filmmakers (actor Kevin Wheatley wrote the script, co-directed, and played the lead) tell us from the beginning that the whole thing is a big joke, yet all the scenes are cut together as if there is some genuine suspense at work.
The performances reveal genuine talent, and Jane Seymour and Daniel Baldwin pop up long enough to provide a little name value, but the characters overstay their welcome, and the camera really loves to linger over the actors’ every twitch, tic, and grimace. (One of the villains breaks down and sobs twice during the movie; it’s sort of funny the first time, but not the second.) The whole thing winds up feeling like a series of extended improvs, where the director was too good a friend to yell, “Cut” and tell his buddies they were over-doing it.
If you have the patience to wade through the slow-moving muck, you will find an occasional nugget worth seeing, like the final fight scene, wherein our hero, after getting his ass kicked for a few minutes, realizes that his human-looking opponent is actually an android. “Now I don’t feel like such a pussy,” he deadpans, as if getting killed by a robot – instead of a human being – were less detrimental to his male vanity. Moments like this make you realize that BEACH PARTY would have been ultra-cool as a faux-coming attractions trailer or a five-minute sketch; too bad they stretched it out to feature length.

Although the DVD box art features the banner “National Lampoon Presents,” National Lampoon had nothing to do with the making of the film. Nor does the bikini-clad blonde on the cover give an accurate picture of the film’s content.
In 2006, BEACH PARTY AT THE THRESHOLD OF HELL screened at Screamfest horror film festival in Hollwyood. Although it is not a horror film, apparently it merited inclusion because of the copious blood spilled, which includes one ripped-out spine, one chainsaw death, a hatchet through the head, a gouged eye, and one heart pulled from a chest.
The film is (perhaps optimistically) entitled Part One, and after the Screamfest screening Wheatley assured the audience that he is scripting the next two chapters in the trilogy. Whether they come to pass may depend on the distribution deal for this film. According to producer Jamie Bullock (who also stars as “Cannibal Sue”), the filmmakers were considering for self-distribution, in order to retain all the rights to the property.
BEACH PARTY AT THE THRESHOLD OF HELL (2006, home video release on July 18, 2008). Directed by Jonny Gillette, Kevin Wheatly. Written by Kevin Wheatley. Cast: Kevin Wheatley, Paul Whitty, Chandler Parker, Jamie Bullock, Bill English, Stewart Carrico, Lea Coco, Alex Reznik, Ted Schneider, Richard Riehle, Daniel Baldwin, Jane Seymour.