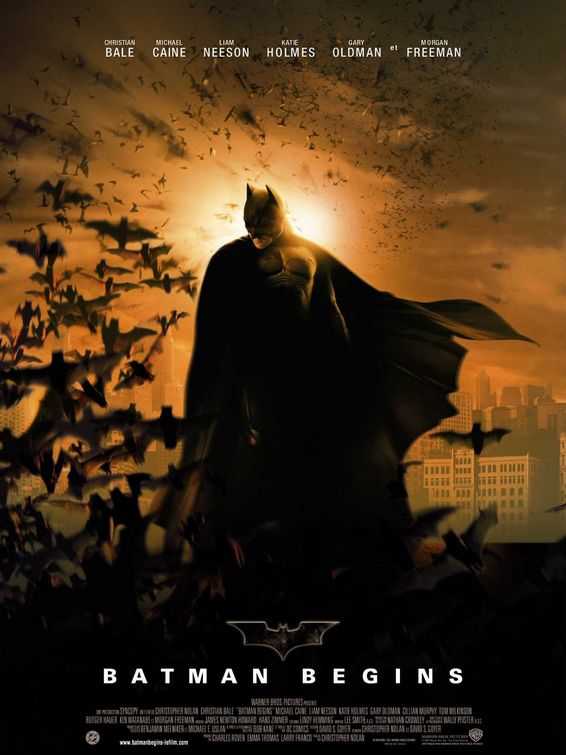 BATMAN BEGINS is one of the best-ever adaptations of a comic book character – a blast of energy that reinvents the Dark Knight for a new generation of film-goers. It is darker and more intense and action-packed than the much lauded X-MEN films, and the portrait of its tortured hero dramatically outdoes the recent SPIDER-MAN films.
The film exploits what is rich and fascinating about the Dark Knight mythology, fashioning an intriguing and dramatic origin story that shows how Bruce Wayne became Batman (a feature sadly neglected in the previous films). In fact this may be the best of the BATMAN features. (Certainly BATMAN FOREVER and BATMAN AND ROBIN are no competition, and despite critical consensus Tim Burton’s first BATMAN is a dull, plodding affair; only the much-maligned BATMAN RETURNS has enough crazed energy to offer any competition).
Elements of Frank Miller’s THE DARK KNIGHT RETURNS and BATMAN: YEAR ONE are skillfully woven in with other bits and pieces culled from Batman’s long comic book career, and the result is not comic book hi-jinx but an exciting and adult action-adventure that has lots of dramatic weight without being overly heavy-handed.
Christian Bale is far and away the best on-screen incarnation of the Caped Crusader. He captures the tortured side of Bruce Wayne and has fun playing Wayne’s pose as a millionaire playboy — important facets never satisfyingly handled in the earlier films. And he is great in the batsuit — Batman as ninja — nearly invisible in his nighttime attacks on hapless opponents.
The only slight flaw in the performance is the low-tone of voice he uses as Batman. Perhaps it is supposed to sound like Wayne disguising his voice, but it sounds forced, slightly artificial, bringing back unwanted memories of Michael Keaton trying to sound tough.
The supporting cast is excellent. Gary Oldman is great as Jim Gordon — apparently Gotham’s last honest cop. Tom Wilkinson is a genuinely frightening mob boss because he feels like a real person, not an over-the-top comic book villain. Michael Caine and Morgan Freeman are both put to good use, leaving a memorable impression without too much screentime. Only Katie Holmes fails to register; she’s pretty, but not particularly memorable.


Unfortunately, the fight scenes are a disappointment (which was the trouble with the old BATMAN films too, except for Batman and Catwoman’s confrontations). For some reason, the current film style seems to be to film everything in close up so that the movement is blurry beyond comprehension and then to cut the images together so fast as to confuse the eye even more. Apparently, no filmmaker in America has confidence that they can stage a fight scene that will stand up to scrutiny that allows us to actually see what happens.
Interestingly enough, although the Batman character has recently been seen as a sort of reactionary force (Travis Bickle in tights, seeking to clean all the scum off the streets), BATMAN BEGINS emerges with a somewhat liberal sensibility: an optimism about the capacity for human conscience to reign in unchecked capitalism for the greater good of the community. Rather like Dirty Harry in MAGNUM FORCE, Batman finds himself up against a secret society even more extreme than he is, sort of the Dark Knight’s even darker alter ego. In opposing their radical agenda (destroying Gotham to punish it for its decadence), he moves away from being an agnry avenging vigilante figure angry, taking on a more heroic cast without sacrificing his fearsom aura.
The action toward the end does take over and move the film into more conventional territory, but it never completely overwhelms the plot. Inevitably, the conclusion is not going to provide a traditional catharsis in which Bruce Wayne wrestles and conquers his demons once and for all. The point is to establish the character — a character the audience already knows very well – as if he were something new.
BATMAN BEGINS does this expertly, playing taking the familiar notes and fashioning them into a new song that leaves viewers wanting to see more. It is a truly nice touch that the film’s title does not appear until the very end — it’s the filmmakers’ way of boldly acknowledging that what we have seen so far is merely prelude. Hopefully, even more great things will follow. 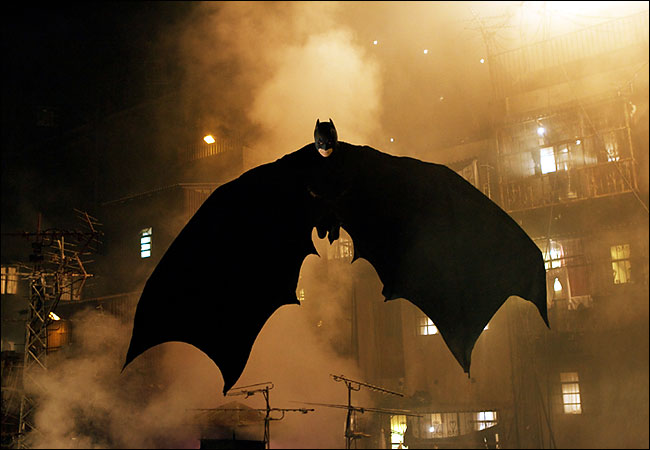 After the box office and critical disappointment of 1997’s BATMAN AND ROBIN (wherein director Joel Schumacher included the infamous nipples on the Bat-suite), the franchise turned dormant for many years. During that time, several attempts were made to jump-start a new Bat-film, with various scripts being written (including BATMAN VS. SUPERMAN) and several different directors’ names attached (including Wolfgang Petersen).
At one point, there was a plan to adapt Frank Miller’s BATMAN YEAR: ONE, with Miller supplying the screenplay, with Darren Aranofsky (who helmed the excellent art house science-fiction film PI) attached to direct. As its title implies, Miller’s graphic novel tells the the story of Batman’s first year in action. Although the final screenplay for BATMAN BEGINS is not officially based on YEAR ONE, numerous similarities abound; the finished film also includes elements from Miller’s previous Batman graphic novel THE DARK KNIGHT RETURNS. Here’s a rundown:

Some of these plot elements are substantially altered from the source material. For instance in BATMAN YEAR ONE, Batman passes information along to Harvey Dent, not to Rachel Dawes. And in DARK NIGHT RETURNS, Batman recalls that Dick Grayson used to say “batmobile”; however, he dismisses the term as something a teenager would come up with, not something he would say himself.
BATMAN BEGINS (2005). Directed by Christopher Nolan. Screenplay by Nolan and David Goyer, based on the DC Comics character created by Bob Kane. Cast: Christian Bale, Michael Caine, Liam Neeson, Katie Holmes, Gary Oldman, Morgan Freeman, Cillian Murphy, Tom Wilkinson, Rutger Hauer, Ken Watanabe.