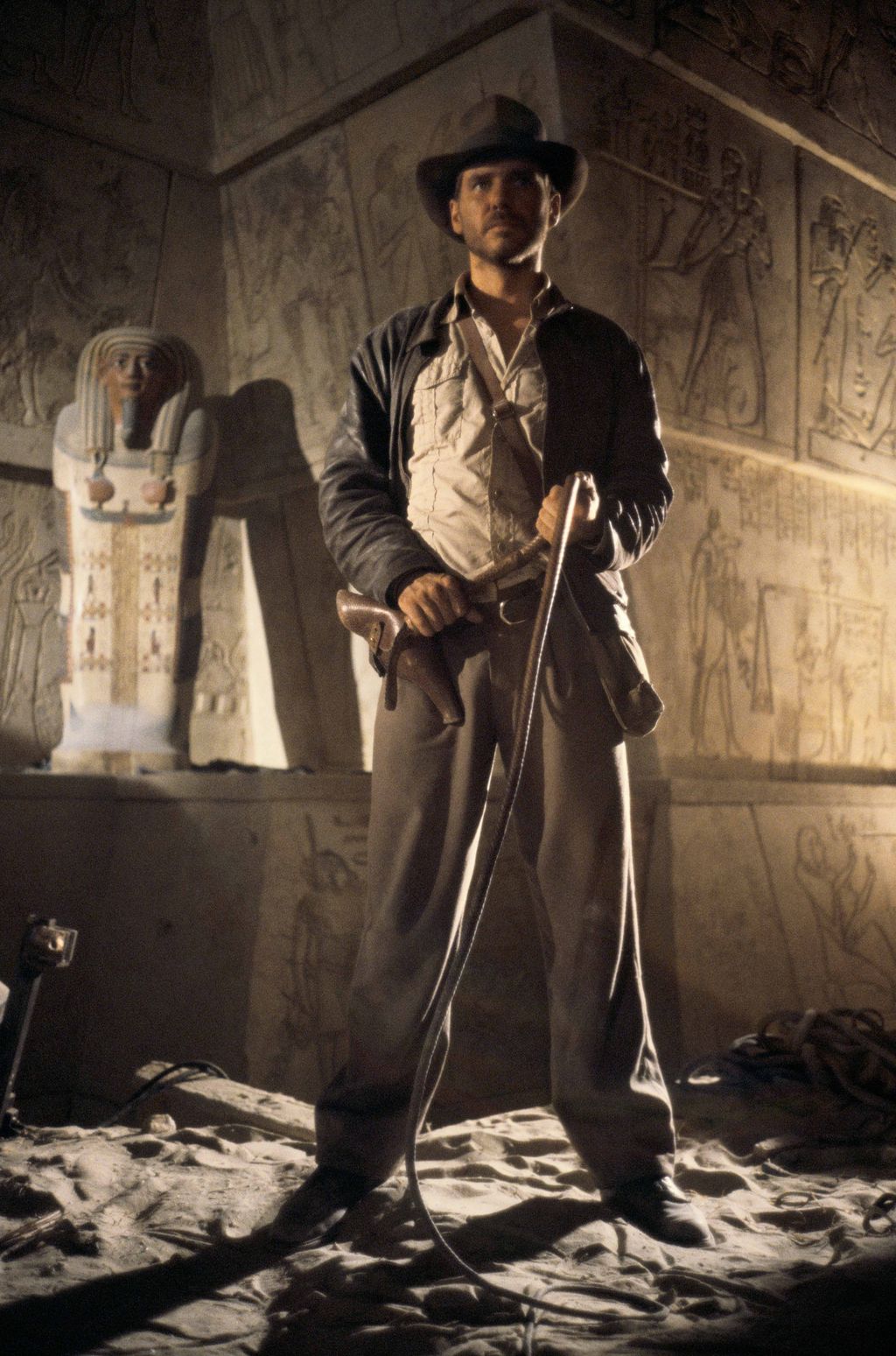 The story incorporates exotic locations, lost cities, and mad ambitions, pitting power-crazed villains against well-matched rivals.”The thing to keep in mind abut this film is that it is only a movie,” says Steven Spielberg. “It takes all the license of an exotic entertainment that aims to thrill and scare and strike one with a sense of wonder.”

—from advance publicity for RAIDERS OF THE LOST ARK (1981).

There is little doubt that George Lucas’s and Steven Spielberg’s first RAIDERS film in 19 years, INDIANA JONES AND THE KINGDOM OF THE CRYSTAL SKULL, is the most anticipated film of the summer.
So in advance of it’s nationwide opening on May 22, here with the help of the studio press notes, are a few thoughts about the fourth Indiana Jones film.
It appears that the main reason it has taken nearly 20 years for a fourth installment of the adventures of Indiana Jones to reach theaters, is Mr. Lucas’s and Mr. Spielberg’s failure to agree on a suitable storyline. Which leads one to wonder, when two such strong-willed personalities butt heads over story ideas, which of them will eventually win out?
Perhaps they both agreed to compromise slightly in order to get INDIANA JONES AND THE KINGDOM OF THE CRYSTAL SKULL made, but back in 1989, after they finished INDIANA JONES AND THE LAST CRUSADE, both men seemed to agree they had exhausted the possibilities in the series.
Spielberg says, “I shot Indiana Jones riding a horse into the sunset because I thought that brought the curtain down on the story. And in a sweet, nostalgic way, that was fine with me at the time.”
Likewise, Lucas felt Indy’s on-going quests for ancient occult icons had pretty much dried up. He now talks dismissively regarding the Sankara Stones as being an especially weak plot device to set INDIANA JONES AND THE TEMPLE OF DOOM into motion. So the key factor for any fourth  installment of the series would be in finding another ancient supernatural artifact that would be a compelling enough reason to send Indy on a new adventure.
One of Lucas’s early ideas was to bring Indy forward two decades, into the paranoid fifties, when UFO sightings first became commonplace. This resulted in a script called INDIANA JONES AND THE SAUCER MEN FROM MARS, but after both Spielberg and Harrison Ford had doubts about the concept, it was soon discarded. Finally, Lucas came up with the idea of using crystal skulls that Indiana would search for in the legendary ancient city of Akakor, near Machu Picchu, in Peru (however, in the movie Akakor has become the City of Gold, and the name Akakor is transposed so it refers to “The Temple of Akator.”)
Like both the Ark of the Covenant and the Holy Grail, the crystal skulls actually have a basis in fact, which have become the basis of many legends and myths over the years, and naturally, have been embellished even further for the movie.
Here are some of the supposed “facts” regarding the discovery of the most sensational crystal skull, but they are shrouded by scientific doubts and mystery. When the British adventurer, F. A. Mitchell-Hedges and his step-daughter, Anna, were in Central America in 1924, excavating at the ancient ruins of a Mayan temple at Lubaantun (in British Honduras), Anna claims to have found an object glinting in the soil under a collapsed altar. It turned out to be a beautiful sculptured human skull, carved out of a single block of translucent quartz crystal. When Anna first touched the artifact, she claimed she experienced strange sensations and any time she placed the skull near her bed at night, she reported vivid dreams of the Mayan Indians who had lived thousands of years ago.
Strangely enough, only a year earlier, in 1923, halfway around the world in Egypt’s valley of the Kings, another British explorer, Howard Carter was to make his sensational entrance into the burial chamber of King Tutankhamun that would inspire Universal’s 1932 horror classic, THE MUMMY.
Later, in his 1954 autobiography, F. A. Mitchell-Hedges asserted that the crystal skull was “at least 3,600 years old  (about the same age as Karloff’s In-Ho-Tep) and according to legend was used by the High Priest of the Maya when performing esoteric rites. It is said that when he willed death with the help of the skull, death invariably followed.”
News of the “Mayan” crystal skull caused a sensation in the art and antiquities world and a number of other crystal skulls surfaced soon thereafter. Some say the skulls are relics of the lost continent of Atlantis and others claim they may be artifacts left by visitors from other galaxies. Believers in the occult maintain that the skulls are matrices of radiant psychic energy, endowing their owners with ESP-like powers, along with the ability to conjure spirits, cure illnesses and foretell the future.
Whether the crystal skulls are genuine artifacts or not, Lucas, Spielberg and Ford all eventually agreed that they would make a suitable object for Professor Henry Jones to search for, if they were to finally send him on a fourth cinematic quest.
COMING IN PART TWO: Recreating Indiana Jones in the S-F 1950’s on five studio soundstages.
[serialposts]