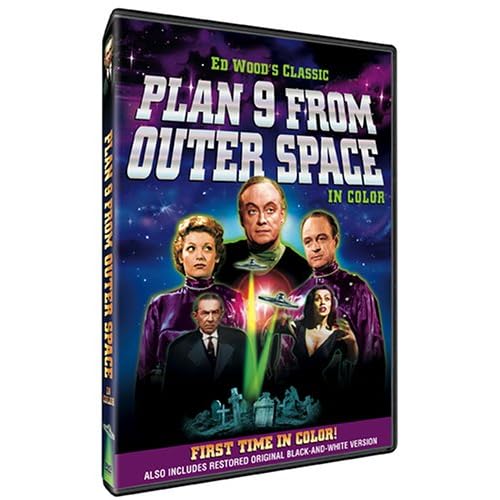 This DVD from Legend Films presents Ed Wood’s cult classic – commonly regarded as the worst film ever made – in a colorized version, along with some contributions from Mike Nelson (former captain of the Satellite of Love on MYSTERY SCIENCE THEATER 3000), plus a few bonus features. PLAN NINE FROM OUTER SPACE has received more attention than it probably deserves, and it is an open question whether anyone really needs this title in their collection; however, if you feel compelled to have it on your shelf, this is the version to get. The print is in good shape; the colorization looks nice; you can also view the film with its original black-and-white photography intact; and the bonus features are interesting and funny.
The most interesting thing about viewing PLAN NINE again is the realization that, despite its reputation, it is far from the worst movie ever made. It is sloppy, silly, cheap, and pretentious, and yet there are many movies so boring, atrocious, and/or offensive that PLAN NINE cannot even begin to compete them in terms of sheer unadulterated awfulness.
PLAN NINE is bad, but it is fun to watch. Writer-director-producer Ed Wood, Jr., seems to have been blissfully unaware of his own shortcomings as a filmmaker. As a writer, he simply regurgitated old cliches and mixed them with current trends, but the bizarro combination of Gothic horror (the walking dead) with science-fiction (aliens and flying saucers) is interesting in a movie-movie kind of way. As a director, he seems to have been completely unconcerned about filming scenes that were well beyond his budget, and he is barely concerned with hiding the shortcomings.
At times, Wood’s work seems almost avant garde, as when he frames a commanding officer against a blank wall that is apparently meant to suggest a horizon-less sky. Poverty (of both budget and imagination) was the mother of Wood’s invention, yielding a catalogue of cinematic mistakes: mismatched cuts, obvious doubles, artificial sets, unconvincing special effects, and absurd action. A more sophisticated director – Jean-Luc Godard, for example – might have performed some cinematic jujitsu and synthesized these techniques to create an abstract rendering of a science-fiction film (this is the guy who had the inspiration to film the sci-fi script ALPHAVILLE as if it were a hard-boiled film noir detective tale). In Wood’s case, we get the unrefined, raw material that stumbles toward accidental art but in the end falls flat on its face.
Are there words to convey the rapturous ecstasy inspired by delightfully pretentious philosophical ramblings from alien invaders, who muse that, on Earth, the people who can think (the living) are afraid of those who can’t think (the dead). Incredibly, Wood manages to top this with the alien’s high-minded warnings about the threat that Earth poses to the galaxy, a heavy-handed sermon that devolves into frustrated name calling: “You see! You see! You’re stupid minds! Stupid! STUPID! ”
All budgetary considerations aside, Wood clearly had no talent for using his meagre resources in any but the most absurd way. One might forgive him for being forced to film a graveyard scene on on obvious interior sound-stage, but what possessed him to have the funeral goers pile out of a tiny tombstone door like a variation of the circus clown car gag (in which an improbable number of clowns exit from a tiny vehicle). You cannot blame lack of money for the way he lets his policeman characters (who should know better) carelessly wave guns in each other’s faces.

Even when Wood has something at his fingertips that could yield some entertainment value, he has no idea what to do with it. This is particularly obvious with horror icons Bela Lugosi and Vampira. Former Dracula-star Lugosi is left running through his vampire shtick like an aging vaudeville performer recycling his greatest hits, and actress Maila Nurmi is given virtually nothing to do but wander silently around the graveyard in her Vampira get-up. Even Ed Wood should have been smart enough to exploit more of her persona (which relied on her voice and attitude as much as her looks); at the very least, if he was going to cast her as a “Vampire Girl,” he should have shown her actually attacking a victim.
Paradoxically, Ed Wood’s biggest failing as a filmmaker is also his saving grace. He was a terribly sincere, and he seems to have thought that viewers would suspend disbelief in spite of PLAN NINE’s budgetary and artistic shortcomings. There is no intentional irony, no winking toward the audience, no pretense of passing off the bad special effects, cheap production values, and lame storytelling as some kind of spoof. This straight-faced presentation goes well beyond self-parody, creating a truly bizarre oddity of cinema that has to be seen to be believed.

The Legend Films DVD presents PLAN NINE FROM OUTER SPACE in a restored print, viewable in both the original black-and-white and in a colorized version. The latter actually looks decent. The introduction with Criswell is rendered in what looks like sepia tone; the rest of the film features fairly believable color that does not look painted on. This is probably more care and expense than was ever lavished on the film originally.
Bonus features include audio commentary, trivia subtitles, Ed Wood home movies, “Deleted Scenes” (actually jokey altered scenes created for this DVD), and a humorous list of Plans 1-8 from Outer Space.
AUDIO COMMENTARY: This displays some of the same weakness seen in Mike Nelson’s work on The Film Crew, which is to say: he does not provide a real audio commentary, just the same old jokes he did on MYSTERY SCIENCE THEATER 3000. Nelson begins promisingly, noting some interesting trivia about narrator Criswell (he was popular television psychic and sometime weatherman) and also about actor Gregory Walcott, who appeared in some mainstream movies (“Of course, he was also in this,” Nelson dryly observes, “which kind of counts against him.”). A lot of the riffing is on obvious topics, such as the switch between Lugosi and his double. (Do we really need Nelson to point this out?) The biggest problem is that, working alone, Nelson provides only one-third of the jokes you get with either MYSTERY SCIENCE THEATER or THE FILM CREW. On the plus side, his anorexia joek – an exclamation of  “Lara Flynn Boyle!”  upon seeing the “Ghoul Man” character reduced to a skeleton – is laugh-out-loud funny.
BONUS TRIVIA SUBTITLES provide the fun background information lacking in Nelson’s audio commentary. The subtitles note the trouble that Dr. Mason (who doubled for the Ghoul man after Lugosi died) has with his cape – which at one point almost falls off, forcing the actor to quickly wrap it back around his shoulders. Also noted is that actor Paul Marco went on to recreate his Patrolman Kelton role in two subsequent Ed Wood movies, creating an unofficial “Kelton Trilogy.”
Both the audio commentary and the trivia subtitles are available with either the colorized or black-and-white version of the film, but you cannot simultaneously listen to the commentary and watch the subtitles.
COMMERCIALS: These are a handful of short, low-budget spots Wood made, with space for Sponsor Card to be inserted later, so that the commercials could be sold to different local advertisers. In the jewelry store ad “Treasure and Curves,” pirate women bury a chest of jewelry. In the men’s store commercial  “Magic Man,” a half-naked man magically disappears, then reappears in new clothes. “The Bestest” has Western setting: a gunfighter gets a drop on a rival, who asks to be buried with his boots on; admiring the boots, the gunfighter relents, and the two men head for the shoe store, leaving girl behind.
PLANS 1-8 has Mike Nelson postulating on the nature of the undisclosed plans that preceded Plan 9, such as enlisting the aid of Earth’s garden gnomes or radiating the pituitary and pineal glands of road kill squirrels. Mixing footage of the film with animated graphics or found footage, this milks the concept for a few good laughs, particularly Plan 3 (“Just sit tight and do nothing”), which features the infamous footage of George Bush reading children’s book during the 9/11 attacks.
ED WOOD HOME MOVIES: These consist of a couple of clips with jazzy background score. The first is pretty ordinary stuff – a birthday scene in which even the dog gets a slice of cake. The second shows Wood dressing up in drag.
DELETED SCENES: This is another joke feature. The scenes actually consist of the same old PLAN NINE footage, which has been re-edited or enhanced with computer-generated imagery. In one snippet, TV’s Brady Bunch appears on the alien’s view screen, prompting one of the Earthlings to cringe, “You fiend!” Easily the best joke – so good it is used in three times without losing its impact -is based on the police detective’s penchant for gesticulating with his loaded revolver pointed at Kelton’s face. A little CGI work and a sound effect creates a wonderful illustration of why you should not do this.
TRAILERS includes previews for other colorized DVD movies from Legend Films: The Three Stooges, HOUSE ON HAUNTED HILL, CARNIVAL OF SOULS,  NIGHT OF THE LIVING DEAD, REEFER MADNESS, and of course PLAN NINE. Curiously, the PLAN NINE trailer gives Bela Lugosi star billing, despite his low placement in the film’s actual credits. (Top-billed Tor Johnson and Vampira are also mentioned by name but less prominently.) Even more curiously, the botched take of Dr. Mason nearly losing his cape is included.
The bonus features help make this as worthwhile a presentation of PLAN NINE FROM OUTER SPACE as one can imagine. The movie’s enduring cult status seems assured, but the best place to see it is at a midnight movie/bad film festival screening, with lots of appreciate fans laughing along with you. That kind of community feeling can never be recaptured at home, but if this strange little piece of film history needed to be preserved on DVD, it is hard to imagine a better one, short of remaking the movie itself.
Click here to purchase Plan Nine From Outer Space on DVD.

2 Replies to “Plan Nine From Outer Space – Colorized on DVD”