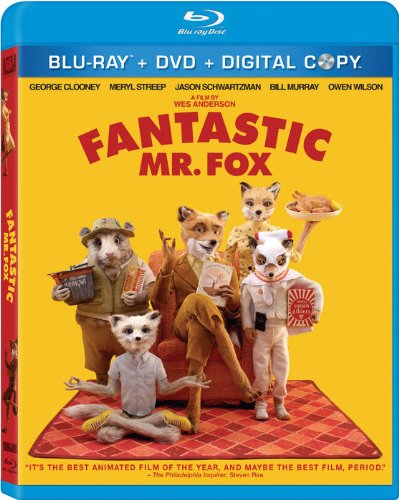 True to its title, FANTASTIC MR. FOX is an absolute astonishment of a picture, seamlessly merging the literary sensibilities of author Roald Dahl with the droll, urbanite wit of Wes Anderson.  Ironically, it was the participation of Anderson that initially worried us; the director’s recent films have been polarizing, to say the least, and we found his arch, hyper-finicky visual style in THE LIFE AQUATIC (and especially THE ROYAL TENENBAUMS) to be at odds with the development of any real emotion.  Maybe puppets are Anderson’s preferred medium.
Mr. Fox (George Clooney) a reformed-chicken-thief-turned-columnist lives a safe, if boring, life with wife Felicity (Meryl Streep) and awkward son Ash (Jason Schwartzman).  Tiring of living in a hole (figuratively and literally), Fox enlists the aid of attorney Mr. Badger (Bill Murray) to purchase a grand new abode in a tree located perilously close to the industrial farms owned by Boggis, Bunce, and Bean (the latter, Michael Gambon). The proximity poses too great a temptation for Fox, who is soon breaking the promise made to his wife years ago to abandon his produce-stealing ways.  Enlisting the aid of tree superintendent Kylie (Wally Wolodarsky) and Fox’s nephew Kristofferson (Wes’ brother Eric Anderson), Fox embarks on an – at first – stunningly successful round of thievery at the farmer’s expense; soon, however, their luck catches up with them at the hands of Bean, and all the animals in the area pay the price for Fox’s recklessness.
Anderson showed amazing promise with his 1998 debut, Rushmore, because at the center of the film was a carefully observed friendship between a pair of seemingly desperate characters.  Unfortunately, Anderson’s two subsequent efforts – The Royal Tenenbaums and The Life Aquatic with Steve Zissou – seemed to abandon emotional truth in favor of increasingly fussy cinematics, with both characters and situations existing only as representational ciphers.  The Darjeeling Limited was an encouraging departure, but it felt a bit half-baked, almost as if Max Fischer was attempting a Wes Anderson tribute.  Fortunately, there appears to be something about the medium of stop-motion animation that has brought out a tenderness in Anderson’s work that we haven’t seen in a decade.  All the trappings are still there (the elaborate framing and overlaid inter-titles, the all-around drollery of the humor, Owen Wilson), but here they find themselves at the service of a story that didn’t originate with Anderson.
Roald Dahl has one of the most instantly individual voices in the world of children’s literature.  Dahl, who passed away in 1990, understood that the young people need a bit of darkness in their stories and, until now, only Nic Roeg’s film The Witches has been able to tap into that darkness with success.  In Fantastic Mr. Fox, written in 1970, Dahl created a fanciful universe in which the creatures exist in typical ‘animal’ surroundings but with human attributes – but it is also a world of danger, with the possibility of a violent death at the hands of humans lurking just on the other side of the prose.  The ultimate success of the Fox family isn’t total victory, but merely surviving for another day.
Anderson captures this underlying theme beautifully; the film is photographed in gorgeous amber hues, evoking fall – a season of death – as well as any film we’ve ever seen.  The particular brand of stop-motion puppetry used for is a bit jarring at first – it hasn’t the well-sanded edges of other stop-motion like Coraline or James and the Giant Peach (interestingly, another Dahl adaptation).  The textures of the individual puppets are a bit rougher, but combined with Anderson’s careful compositions and the superb, erudite vocal work of the cast (Clooney especially is outstanding here, effortlessly conveying Fox’s cocky but ultimately flawed character), they become yet another memorable component of one of 2009’s best films.
Fox’s Blu-Ray (20th Century, not Mr.) is the optimal presentation for the film, with the 1080p picture conveying the myriad colors and textures of the world – and here’s where the use of actual sets, costumes and actors (well, puppets, anyway) comes into play, as these things just can’t be replaced by computer animation.
The disc also wins in not overloading the viewer with the typical EPK ballast that weighs down so many popular films.  There’s a single, long-form documentary Making Mr. Fox Fantastic (presented, as are all extras, in HD) that can be watched in pieces or as a whole. The documentary goes into the laborious stop-motion process in fascinating detail.  Bill Murray acts as a tour guide for a good chunk of the footage, and it’s great to see him so tuned-in by the process.  We also learn about the impression that Dahl’s home made on Anderson and learn the fate of the actual tree that inspired Fox’s swanky home.
There’s also a brief but humorous breakdown of the rules of wack bat (which isn’t that much more stupefying than cricket) and the original trailer.  Fox has also taken the increasingly popular route of including a separate DVD edition of the film with each Blu-Ray set (at least in the initial pressings) alongside the more common digital copy.
Highest recommendation.