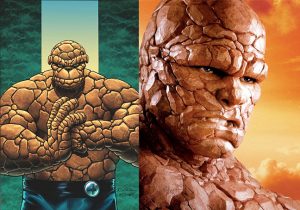 In contrast to the first two Fantastic Four films which featured actor Michael Chiklis in an actual costume, the reboot, FANTASTIC FOUR REBORN, will bring a completely computer generated version of The Thing. This news comes along with confirmation that filming on the project has been pushed back until production has been completed on  X-MEN: FIRST CLASS. Given that X-Men won’t even begin filming until this September, it’s safe to assume that we won’t be seeing much on the Fantastic Four front for quite some time.