It is with sorrow that we note the passing of Erich Kunzel at the age seventy-four. On September 1, 2009 the celebrated conductor of the Cincinnati Pops Orchestra for well over thirty years was struck down by “cancer of the pancreas, liver and colon,” according to Chris Pinelo, a spokesman for the Cincinnati Symphony Orchestra, which encompasses the Pops. Kunzel is survived by his wife of 33 years, Brunhilde.
He was diagnosed in late April, yet as advanced as the illness was by the end of May he still led the National Symphony in a Memorial Day concert on the Capitol Building lawn in Washington, and did so again on July 4. Both were televised by the Public Broadcasting Service. It was exactly one month prior to his death that he made his final public appearance, on August 1, conducting the second half of a Pops concert in Cincinnati.
Last year I wrote a light-hearted article of apology for not being able to attend a scheduled appearance he made in Denver, CO, where he conducted  “Trek: The Concert” –  a collection of music from the universe of Star Trek. The point was that I’d always wanted to see him live; he was a mere one hour away, and I still couldn’t arrange to get there. It seemed almost hypocritical because I’m always observing that we don’t get enough of the likes of him—or enough film music displayed—in the Colorado Springs/Denver area. Now I feel the regret of that missed concert more poignantly than ever, and I am sorry for it. 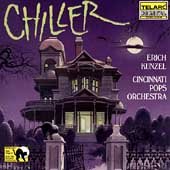 Mr. Kunzel was born to German-American immigrant parents in New York City. He began arranging music at an early age while at Greenwich High School in Connecticut and also played the piano, string bass, and timpani. He graduated from Dartmouth College with a degree in music (thought he started out as a chemistry major), then studied at Harvard and Brown universities. He conducted for the Santa Fe Opera early in his career and studied at the Pierre Monteux School. From 1960 to 1965, he conducted the Rhode Island Philharmonic. Then from 1965 to 1977, he served as resident conductor of the Cincinnati Symphony Orchestra. It was also in 1977 that he helped found the Cincinnati Pops Orchestra and became its conductor. In addition to his duties associated with this he lead the 8 o’clock popular concert series and made jazz recordings with Dave Brubeck and Duke Ellington.
Under Maestro Kunzel’s leadership the Pops became internationally known with half a dozen best-selling recordings a year and almost weekly subscription concerts. Once a major contender to succeed Arthur Fiedler at the Boston Pops, his popular recordings of classical music, Broadway musicals, and film scores topped worldwide crossover charts more than any other conductor or orchestra in the world. 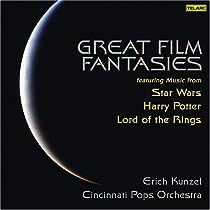 Mr. Kunzel was on a continuous mission to make orchestral music more accessible to those who might not normally be drawn to what they considered long-hair music. For example, at Halloween he and the Pops musicians would don costumes and pumpkins would explode onstage. His recordings include numerous film music projects, many of them devoted to fantasy, science fiction, and horror: The Great Fantasy Adventure Album (with tracks from Jurassic Park, The Terminator, and Hook); Great Film Fantasies (music from Star Trek, Lord of the Rings, and Harry Potter); Chiller (creepy clasiscal music and horror movies cues); and Symphonic Star Trek (self explanatory).  Science fiction and fantasy themes and suites were also laced through his other movie music albums, with cues from Independence Day, Batman Forever, Jumanji, Dragonheart, The X-Files A Clockwork Orange, King Kong, Star Trek, E.T., and Somewhere in Time, showing up on The Big Picture, Mega Movies, Simply the Best Movie Themes, Vintage Movies, and The Ultimate Movie Collection .
“He was able to take highbrow and in his inimitable way make it somehow lowbrow,” said his protégé, Steven Reineke, the associate conductor of the Cincinnati Pops, who was recently named music director of the New York Pops. “And I mean that in the best way possible.” 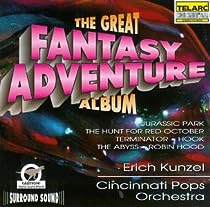 He conducted professionally for just over fifty years and in that time tucked approximately 85 high-quality albums under his belt and sold ten million recordings. Like John Williams with the Boston Pops, he enjoyed adoration from nearly all those who admire orchestral film music. Over fifty-five of the eighty-five or so albums he made with the Cincinnati Pops have landed on Billboard’s top ten charts. He won several Grammy Awards, the Grand Prix Du Disque, and the Sony Tiffany Walkman Award for “visionary recording activities.” He even made historic trips to China and was presented with the National Medal of Arts, the highest honor given to artists and arts patrons by the United States Government.
Mr. Kunzel was a one of kind soul within his art form, but that soul managed to connect to people all around the world. He will be much missed.
For more information on Erich Kunzel and his work, visit http://www.erichkunzel.com/.