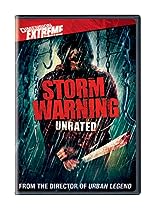 It is a shame that this film never got a shot in U.S. theatres. It certainly deserved a chance: it definitely would have pleased audiences, and it might have surprised a few critics, proving that the much despised “anti-tourism” sub-genre of horror (HOSTEL, TURISTAS, WOLF CREEK) can still yield a worthy title or two. STORM WARNING is an intense, violent thriller featuring some of the most inventive graphic blood-letting ever captured on celluloid. That may not sound like much of an enticement – after all, excessive on-screen violence is de rigeuer these days – but STORM WARNING manages to orchestrate the mayhem in a way that is gruesome, funny, and completely satisfying to anyone who cares about story and characterization. In short, you do not have to be a gore-lover to love this movie.
Written by Everett De Roche (ROAD GAMES), the screenplay mixes elements of DELIVERANCE and STRAW DOGS – not to mention “Goldilocks and the Three Bears”! A married couple, out boating off the coast of Australia, get caught in a storm and end up lost on an isolated island, where they seek shelter in an empty, rundown house, which turns to have three rather unfriendly inhabitants. The couple is captured, degraded, and tormented; the husband Rob’s leg is broken, and the wife Pia is targeted for rape, until a disagreement over who goes first leads to a break in the action. While the “Three Bears” – a father and two sons – decide what to do, the wife uses the opportunity to turn the tables on the captors, setting a horrific booby-trap and using her artistic skills to fashion a unique I.U.D. that -in a scene that must be seen to be believed – provides a most painfully unwelcome surprise for a would-be rapist.
The clever thing about STORM WARNING is the way it plays with genre expectations, delivering the goods while subverting the usual structure.   The film strikes a perfect balance between set-up and payback: instead of eighty minutes of atrocities perpetrated on our lead characters in exchange for a brief final-reel comeuppance for the villains, STORM WARNING spends its first two acts establishing the repulsive qualities of its villains and then lets the heroes turn the tables for the third act, which works perfectly.


Much of the fun comes from seeing the usual horror cliches perpetrated on the bad guys. (As Dirty Harry said in MAGNUM FORCE, “There’s nothing wrong with shooting, as long as the right people get shot.”) For example,  when older brother Jimmy (David Lyons), thinking he has found the married couple’s hiding place, shoots a couple holes in a closet, it is the bloody dead body of his brother Brett (Matthew Wilkinson) that comes falling out in time honored tradition. In another over-the-top moment, the set-up regarding a vicious attack dog (who likes the scent of fresh blood) pays off when Poppy (John Brumpton) pursues Pia (Nadia Fares) after having been mangled by her penis-flytrap invention – only to himself become the victim of his own dog.
Jamie Blanks (whose debut with URBAN LEGENDS was nothing more than another anonymous post-SCREAM clone) does an impressive job here, directing, scoring, and co-editing the film. He builds tension, captures the horrible sense of impotence and helplessness at Rob and Pia’s dilemma, and serves up the payoff in a way guarnateed to satisfy. He does not flinch from showing gruesome violence, but the retribution is so perfectly calibrated to suit the crimes, that even viewers who normally shy away from this kind of thing may find themselves shrieking in appreciative glee.
Fares and Taylor are strong in the leads. Fares ably charts Pia’s transition from squeamish wife (she flinches over the death of a fish) to ruthless avenger (“You have to think like a mad dog…only madder”). Taylor gets points for portraying the unexpected: with his big, strong frame, he seems set up to be the hero but instead winds up figuratively emasculated, mostly cheering his wife on from the sidelines.
Lyons and Wilkinson do good work as the creepy brothers, especially Lyons, who shows not only a few hints of wit and intelligence but also a righteous sense of class resentment agains the rich city folk who have made themselves at home in his family’s lair. Wilkinson is not always as on-target – at times he comes across as a one-dimensional, grinning buffoon – but in the end, even he gives a few shades of gray. Both actors suggest that their characters could have turned out differently under better circumstances – which is part of the film’s strategy of turning them from villains into victims, offering just a smidgen of sympathy before delivering the killing blow. No such sympathy is extended for Poppy, who makes his sons look like choir boys by comparison. Brumpton does a fantastic job with portraying wild-eyed sleaze; he’s thoroughly disgusting without every going over-the-top into camp.
STROM WARNING may feel a bit too familiar to be considered a truly great film. Certainly, the parallels with WOLF CREEK are inescapable (although WARNING’s script was actually written decades earlier, it could not get financing until CREEK proved the viability of the concept). In truth, although WARNING has a much more compressed opening, CREEK’s first act is far more involving (it’s a horror film that is interesting long before the horror rears its ugly head), and it hits a level of convincing brutality that WARNING never quite matches. On the other hand, in the final act, WARNING delivers the goods in a way that CREEK never did.
STORM WARNING does more than simply repulse its audience; it offers a good, old-fashioned catharsis. So many horror films stumble over their endings these days. They tend to be contrived, as if trying to out-guess the audience: on the one hand, slapping on surprise twists as if afraid that a happy ending will be too sentimental for the horror crowd; on the other hand, adding hokey happy endings as if afraid that a mainstream audience will not accept anything else. STORM WARNING avoids the post-modern dilemma by simply following its story through to the best possible conclusion. It’s a simply, neat, and very effective old trick that more films should use.

The Unrated DVD of STORM WARNING features the complete, uncut version of the film (which had been trimmed slighlty for theatrical release in its native country). The disc delivers good picture and sound quality, with a minimum of features: English subtitles for the hearing impaired, a Teaser Trailer, a Theatrical Trailer, and an audio commentary.
The audio commentary features Jamie Blanks, Everet De Roche, Robert Taylor, and several other crew members. As might be expected from the number of people involved, there is a party atmosphere at work, with lots of joking and laughter; fortunately, there is little interrupting or cross-talk, and much interesting information emerges:

Although entertaining, the audio commentary is also quite frustrating. Several times, Blanks refers to deleted footage or other items that he hopes will be on the DVD as bonus features – yet none of them are available on this disc. Perhaps a “Special Edition” disc is in the works, but DVD distributors should be more careful about delivering the goods instead of frustrating their customers.
One small consolation should be derived from the fact that Blanks himself changed his mind about one missing bonus feature: While recording the audio commentary, he expressed hope that a deleted scene showing Fares as a metal sculptor (setting up her later ability to fashion available metal into weapons) would appear on the DVD. During a later question-and-answer session after a festival screening of the film, he said:

There’s a whole sequence that I shot – and I threw away, because I hated the scene – with her in her workshop, building this stuff, to establish how handy she was. I just thought it was a little bit lame because we were setting it up so much, and it was kind of obvious where we gonna go with it from that point. So I threw it away. I don’t think it’s even going to end up on the DVD. I think I erased those scenes!

See a video of the Q&A session below, or check out the transcript here.