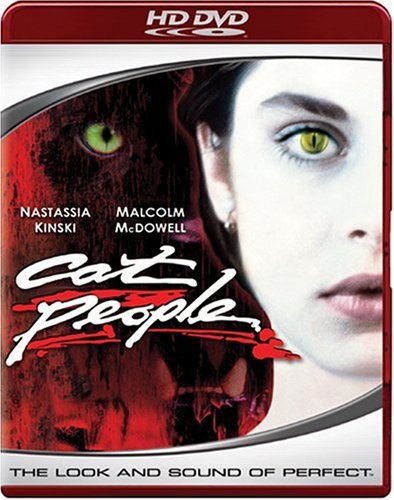 With Universal likely to be the last oar-rower on the HD-DVD lifeboat, their choice of releases on the format becomes that much more interesting. Other than Warner Bros, who recently abandoned ship in favor of the greener pastures of Blu-ray exclusivity, Universal was the only studio keeping up a steady stream of catalog title releases. Many fondly remembered films from the ’80s: THE THING, DUNE, and even THE LAST STARFIGHTER have found their way onto HD-DVD, leaving one to wonder just exactly what kind of wonderful madman was put in charge of title selection. But even with a track record as eclectic as this, the arrival of 1982’s CAT PEOPLE left many dumbfounded. Certainly there had to be better candidates than this? Even keeping to that same era and studio, CONAN THE BARBARIAN would have had much stronger sales, and FLASH GORDON (just re-released on DVD) would have been better suited to HD, with its eye candy sets and costumes. But, wishing and $2 will get you on the subway – CAT PEOPLE is what we were given, so CAT PEOPLE is what we’re going to talk about. But first, back to 1942.
RKO Pictures, looking for a profitable line of low budget horror pictures, imports Val Lewton from MGM; giving him a good deal of autonomy so long as his projects were kept short (double bills, please!) and made cheap (under $150,000, far less than Universal was laying out per-picture in the studio’s classic monster heyday). CAT PEOPLE , directed by Jacques Tourneur, would be Lewton’s first RKO production. The story centers on Irena Dubrovna (Simone Simon, forming the notion of “mysterious European beauty” for decades to come) born in Serbia but fully ‘Americanized’ and living in NYC. While visiting a zoo she meets Oliver Reed (it would take several decades before the notion of an average American named Oliver Reed would be funny), they fall in love and marry in very short order. Wedded bliss is short lived, however, because Irena believes herself to be descended from a race of people who transform into leopards during moments of passion. As Oliver’s frustration builds, he begins to be attracted to co-worker Alice, and Irena finds that lust isn’t the only emotion that triggers her curse. The film went on to be a box office smash – the first in a series of successful pictures made by Lewton at RKO that handled horror in a similarly restrained fashion.
Swish pan to four decades later; Universal Studios, working with RKO Pictures (essentially a letterhead incarnation of the original studio that held the rights to most titles in the RKO library) prepares a remake, and attracts the attention of Paul Schrader. The result is a veritable walking tour of what was both right and wrong with modern horror – and the wisdom of “updating” classic films.

This time out, we join young Irena Gallier (Nastassja Kinski), traveling to New Orleans to live with her brother, Paul (Malcolm McDowell, with Manson lamps set on ‘high beam’). Sparks fly when she meets Oliver Yates (John Heard), a curator at the New Orleans zoo. Matters are complicated when Paul informs his sister that consummating her relationship with Oliver will be difficult because in their family, the throws of passion stirs something ancient in their blood that turns them into a leopard, savagely killing the human mate – but sex with him will work out just fine, thanks. Paul, you see, has been building up quite a body count while waiting for his sister to fulfill his needs, and after the mauling of a prostitute (cult favorite Lynn Lowry, whose own facial features are more cat-like than either co-star) Paul, still in leopard form, is captured by Oliver and taken to the zoo. After seeing Irena and Oliver together (and savagely mauling Ed Begley Jr.) Paul changes back into human form and escapes, leaving Irena to deal with a trail of leopard maulings that lead right to her doorstep and a growing attraction to Oliver that may well result in his death – and very, very messy sheets.
It’s interesting that at a time when he could have probably gotten almost any movie made that Paul Schrader would have chosen CAT PEOPLE. A blazing hot screenwriter after TAXI DRIVER and RAGING BULL, and a coveted director after AMERICAN GIGOLO became a critical hit, one can’t help but wonder at the selection. In the disc’s fabulously frank commentary track – one of the new disc’s major pluses – Schrader admits that he was looking for ‘hired gun’ work that he didn’t have a strong personal attachment to. CAT PEOPLE would certainly have fit the bill; that is until he fell hard for star Kinski during filming. Schrader discusses his affair with Kinski and what we presume to be an acrimonious break-up (according to Schrader, just prior to release she appealed to a Universal executive for her nude scenes to be removed, claiming she felt manipulated).
Schrader’s obsession with his star did produce some of the most flattering photography of a single actress in recent memory, and for the film’s first half, that’s almost enough to sustain interest. But through an unexplained plot contrivance, Irena is taken by brother Paul on a tour of their ancestors wind swept, cyan-toned ancient world – glimpsed in the film’s opening scene – where we watch leopards (or panthers, anyway they’re big and scary looking) mate with young women brought to them as human sacrifices by villagers. This occurs nearly at the halfway mark, and the picture never recovers from it.

While nobody expected the film to adhere to the original’s sense of inference and suggestion over explicit depictions of violence or sexuality, it was turning the abstract concept of a race of inbred cat people into a physiological reality that would be the film’s true undoing. In 1982, advances in the art of practical make-up effects were making celebrities out of Rick Baker and Tom Savini, and it was becoming routine in films like AMERICAN WEREWOLF IN LONDON, THE HOWLING and THE THING for the show to come to a complete stop in order to show off the latest in latex moldings and inflatable bladders. When the lovely Ms. Kinski is subjected to these make-up efforts, the heretofore suspended disbelief comes crashing down like a bag of cat litter, and the show is steered from erotic thriller to monster movie – a genre in which Schrader shows little proclivity (cough – EXORCIST prequel – cough).
SPOILER ALERT:
*
*
*
*
Even Schrader admits that the autopsy scene of leopard-Paul, where the cat is cut open to reveal an intact human hand, doesn’t work. It’s worse than that; it’s laughable, and that’s something genre films can’t afford.
*
*
*
*
END SPOILER.
And once the 1942 figurative became 1982 literal, all that’s left is to see how hard the filmmakers intend to push the ‘R’ rating. Though screenwriting credit goes to Alan Ormsby, the kinky sexuality has Schrader written all over it. Bondage, incest, and even zoophilia abound, but without the religious or psychological underpinnings of Schrader’s better work. And though the gore content probably isn’t enough to shock an audience today, the amount of nudity on display is rather startling. With her gamine haircut and lithe body, Ms. Kinski is pure joy to behold on-screen – and behold her you will, for several extended sessions of nude bayou wandering (if Ms. Kinski had been successful in having her nude scenes removed, the film could have been reclassified as a short subject).
As an embodiment of feline eroticism, Kinski’s performance is quite good; but she simply can’t pull off Irena’s transformation from victim to stalker, particularly in a restaging of the original’s famous indoor pool scene. Beyond giving Annette O’Toole her own bit of obligatory nudity – and if it seems as though I’m complaining, remember please that I have my critic hat on – it reminds us how easily little Simone Simon could convey menace and mystery. And since we’re already in the gutter, it may be worth noting that poor Lynn Lowry’s bra snap-away surely ranks among the most gratuitous nude shots of the decade – and that’s a huge statement.
Universal’s HD-DVD is a direct port of their 2002 DVD: the special features are identical, and the same HD master was used. The HD-DVD has also been a bit controversial in terms of image quality. Though the image does feature some unfortunate edge enhancement (a process used by studios to give the image an artificially sharper look), I found the image more than acceptable – this presentation is the first time that the desert-set sacrificial scenes, with their heavy use of a red/cyan palette, have actually looked halfway decent on home video.

As previously mentioned, the showpiece extra is the feature length commentary by Schrader. It’s an amazingly honest track, with Schrader giving the credit for the film’s visual bravura to the amazing sets and design work of Bertolucci-collaborator Fernando Scarfiotti, credited as “visual consultant” due to union regulations. Other supplements include an equally candid video interview with Schrader filmed for the 2002 release which dovetails nicely with a shot-on-set interview filmed during production where Schrader comes off as an insufferable intellectual. Also on hand is a video interview with Robert Wise on the production of the 1942 version, which has little to do with the subject at hand, but is interesting nonetheless; a featurette on Tom Burman’s make-up EFX; a reel of the gorgeous matte paintings; production photos, and a trailer that looks its age.
REVIEW FLASHBACK: Read Cinefantastique’s original review of CAT PEOPLE by Kyle Counts.