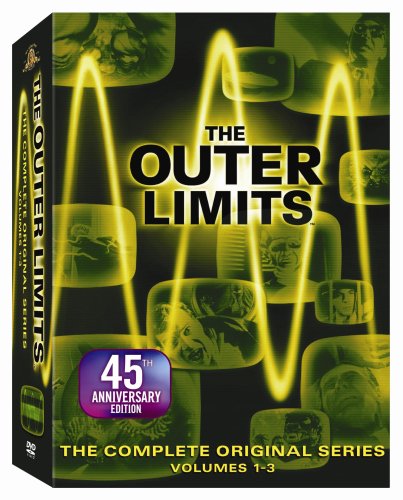 The original black-and-white version of TV’S THE OUTER LIMITS has been released on DVD in various permutations. First it was (logically) divided into two volumes, one for Season One and a second for Season Two; then it was in explicably divided into three volumes (presumably because Season One was nearly twice as long as Season Two). Well, those of you who waited (like me) are in luck because MGM has finally decided to do the right thing and release the entire run of epissodes (forty-nine in all) in one big box set, come October 21.
THE OUTER LIMITS was a bizarre sci-fi show. Series creator Leslie Stevens originally envisioned it as an optimistic series about the wonders of the universe, in which ugly aliens as often as not turned out to be benign. Stevens handed the show off to producer Joseph Stefano (who scripted PSYCHO), and it took a turn toward Gothic horror in sci-fi clothing, with lots of brooding Freudian themes.
In an odd way, the show really was the precursor of STAR TREK. Besides the penchant for wise, superior aliens, there was also a certain amount of behind-the-scenes continuity, with several technicians and actors jumping on board the Enterprise. Keep your eyes open for William Shatner, Leonard Nimoy, and James Doohan.
On a personal note, one of the funniest things I ever saw on television was Shatner’s appearance on Larry King Live, when a viewer called in to ask about similarities between the two shows (he wanted to know whether it was a coincidence that Shatner’s OUTER LIMITS episode involved a space mission called “Project Vulcan,” Vulcan of course being the name of Mr. Spock’s home planet in STAR TREK). Shatner’s non-verbal answer was to stare into the camera lens for what seemed like a minute, mutely expressing his irritation at the geeky question with all the silent contempt he could muster. He finally jabbered out some answer clearly revealing that he did not remember the Vulcan reference in OUTER LIMITS and did not think it was worth remembering.
If only he had said, “Get a life!”