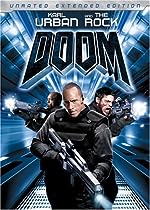 The batting average of videogame-to-film adaptations is not great, and there was little about this one to make us expect it would be anything more than the usual mess of noisy stupidity (guns, monsters, explosions). However, the film version turns out to be much better than expected — a nifty piece of low-ambition entertainment that knows exactly what it is, and delivers fairly well on its promises. There is lots of action, but it’s not annoyingly one-note and overdone; the minimal story is streamlined and fast-paced, providing just enough exposition to set up the situation and let it run, and the direction makes the most out of the solid production values.
The film opens with perhaps its most clever bit: the usual Universal Pictures logo revamped as a desolate planet on which most of the action takes place. We zoom down to the surface and into the corridors of a research lab where something is obviously going wrong: people in lab coats are running around screaming and dying — including one who loses her arm when it gets stuck in a vault door.
So far, so bad. The sequence feels desperate to get your attention, as though afraid the audience would walk out if the film opened with an exposition scene, and the horror of the situation doesn’t register because it’s all filmed in an “aint-it-cool” style that asks you to enjoy the action rather than feel terrified for the sake of the characters under attack.
Fortunately, things improve fairly rapidly once the Rapid Response team is called in, headed by Sarge (The Rock) and Reaper (Karl Urban). The team is the usual assembly of stereotypes, including a rookie (here literally named “The Kid”) who is obviously is too green to ever be allowed on a mission like this, but along he goes anyway because the filmmakers figure it will generate some suspense.
The cast initially seems mostly colorless, especially Urban in what turns out to be the lead role, but they grow on you as the film goes on. Thereis no depth to the characters, but they are given some identifiable ticks and quirks to distinquish them, and even a few good lines.
Once they get to they quarantine the research station, the film turns into a series of suspense scenes, with the Rapid Response team tracking monsters through dark corridors and even a sewer. Unlike the opening sequence, these scenes are usually done with enough flair to generate some real suspense, and one (a mano-a-mano slugfest between man and monster in an electrified containment room) is a real standout.
There’s also a lady scientist (Rosamund Pyke), who turns out to be Reaper’s sister. She’s there to lay out whatever exposion the film needs, which isn’t much. In fact, you will probably guess, long before she reveals it, that the monsters are really the research team, who’ve mutated after a genetic experiment gone awry.
Towards the end, the film manages to come up with a surprise or two and even an interesting plot complication, when Sarge turns out to be a company man who follows orders to use any means necessary to prevent outbreak from the quarantine — even if it costs human lives. This sets up a nicely staged confrontation that brings the film to a satisfying climax.
One of the writers on the script is Wesley Strick, who seems a bit above this kind of thing (he’s written for Martin Scorsese, among others), so perhaps he is the one who infused some life into the story. Certainly, there’s nothing sophisticated about DOOM, but it works well on its own terms, avoids the usual groan-inducing one liners, and manages to avoid feeling completely braindead despite its lack of intellectual ambition. .
Of course, the film delivers the action. Lots of running around in dark corridors with scary things jumping out while marines blast away. Fortunately, it’s orchestrated well enough to build some fun suspense — this is a scary movie of the feel-good type, in the sense that you enjoy the thrills without suffering through any of the tension that marks something like WOLF CREEK.
As for the much-anticipated P.O.V. sequence (shown off in the trailer) that seeks to emulate the videogame feel of looking down the site of a weapon while demolishing a shooting gallery’s worth of monsters, it is carefully inserted toward the end, and well set up by the script (it takes place just as the protagonist is getting supercharged by an injection of an extra chromosome). Although inspired by the Doom videogame, the scene actually plays out like a well-done Steadicam shot that really puts you into the action in an exciting, fun kind of way.
Overall, DOOM is no masterpiece, but it’s much better than than average for its kind of film. Fans of the game should be pleased. If they drag their reluctant friends to see it, they might be pleasantly surprised as well, finding themselves watching the modern equivalent of a good, old-fashioned B-movie — basic entertainment, but done with enough style and craftsmanship to merit praise.
And of course, lots of stuff gets blowed up real good

Perhaps DOOM is one of those movies that is only good enough to support a single viewing; perhaps the visceral impact is diminished by viewing it on a small screen; or perhaps the addition of several minutes to the running time slowed down the pace. Whatever the explanation, the “Unrated Extended Edition” DVD is something of a bore for all but hardcore fans of the videogame.
The new footage is mostly bits and pieces strewn throughout the film that add up to little: a few more mutants are blown away, and we get brief flashes of nudity of the female doctor whose arm was severed by the elevator in the opening scene — before she, too, is blown away. It’s a tasteless but striking moment, combining naked breasts and gore, rather like an exploitation version of the ruthless extermination of a female assassin inin Spielberg’s MUNICH. There is also a longer version of the highlight, the first-person shooter sequence meant to capture the flavor of the videogame on which the film is based.
The bonus features are limited to a handful of featurettes, divided between the film and the videogame. There is no audio commentary, and there is no contribution of any kind from director Andrzej Bartkowiak; in fact, there is little about the actual on-set making of the film. At the least, one would like to have learned what the writers felt about turning a videogame into a movie, and it would have been nice to hear a little about what elements were deemed essential in order to appease long-time fans of Doom.
The bonus features are: