Doctor Who: Time of the Angels/Flesh and Stone 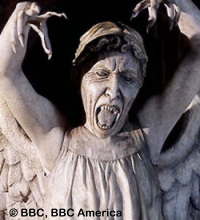 The Eleventh Doctor Is In Good Hands

I’ve been watching the fifth season of the BBC’s revived DOCTOR WHO series on BBC America with great interest. New producer Steven Moffat is branching off from the often inconsistent, but memorable tenure of Russell T Davies, who brought the series back from limbo. It’s early days yet, but I think the series is in good hands.
Matt Smith is the youngest Doctor thus far, and while he still seems to be channeling some of David Tennant’s hyper 10th Doctor, he’s also bringing his own shadings of the Time Lord as being nerdy-quirky, compassionate, far from omniscient, and possibly somewhat immature and reckless.
New companion, Amy Pond (Karen Gillan) is attractive and the center of an enigma, seen in the first episode of the season, when the newly regenerated Doctor discovers a ‘crack’ in space and time, manifesting in her childhood bedroom. He thought he had sealed it, but the trouble was just beginning, in what promises to be a long story arc.
Two of Steven Moffat’s creations for the show, the sinister  ‘Weeping Angels’ and the mysterious River Song (ER’s Alex Kingston) reappear in this two-part episode. Song is a very important person in the Doctor’s life, but they keep meeting out of temporal sequence, a great idea for a show about a time traveler. He first meets her the day she dies–at least, physically. (Fourth Season’s two-parter ‘Silence in the Library / Forest of the Dead’.)
The Angels were created for the third season ” Doctor-light filler” episode ‘Blink’, for which Moffat won BAFTA and Hugo awards.
They’re a strange race from the early universe who appear as stone angels, usually with their eyes covered as though crying. They’re “quantum locked”, meaning they literally turn into immobile statues while anyone is looking at them. As soon as living beings take their eyes off them, they can move quickly, and attack, seeking energy–be it from radiation or people’s own life / temporal energy.


Dr. Song has used her knowledge of the Doctor’s vanity (he visits far future museums to ‘keep score’) to lure him into rescuing her from sticky situation via a starship’s flight recorder on which she has inscribed the message “Hello, Sweetie!” in old ‘High Galliferyan’. She’s also promised his help to a company of soldier-priests intent on destroying the last of the Angels, still onboard the now-crashed spacecraft.
There’s a lot of creepy-fun atmosphere on the planet, in a catacomb full of ancient and decayed to the point of being featureless statues. (Kudos to director of photography Damian Bromley & Crew.)
One of the flaws of the first of the two episodes is that no one suspects what the statues are until too late, including the Doctor, who knows that the long-dead aliens who built the place had two heads, not one. Of course, they are near-dead Angels, now feeding on the ship’s radiation and other power, and any living thing they can find.
And this seemed screamingly obvious to me as a viewer. It’s one thing to figure things out a little in advance of the heroes (which can be a nice plus), it’s another to think they’re all dim-wits.
A young cleric-solider named Bob (David Atkins), whom the Doctor had tried to reassure is killed, and the Angels use his mind and voice to torment the Time Lord. In a nice bit, he remains polite and apologetic as he relays their taunts.
Amy Pond has stared into the eyes of a Angel, and it has gotten into her visual centers, which makes it necessary for her to close her eyes and still try to navigate, having to trust the Doctor, even though she knows he doesn’t always tell her the truth.
She’s saved, but through the actions of River Song, something this new series and season have done often, making the companions seem at times more clever, understanding, or heroic than the Doctor. I can understand the desire to make these characters seem worthy in their own right, both to the audience and the time-traveling hero, but it’s a trend that can become irksome; it seems to diminish the lead role slightly.
The afore-mentioned crack in space & time shows up again, acting as both a deu-ex-machina, and a springboard for further stories.
This crack is actually eating up time & matter, and thus memories–explaining a number of things, such as why Amy had no idea what the Daleks were, despite very dramatic public and world-wide incursions by them in previous seasons. It’s implied no one remembers them, because these events now never happened, an ingenious way of getting rid of stories Moffat’s predecessors did that he might not care to keep in his continuity.
And considering some of the truly over-the-top elements of some episodes, who can blame him?
(People who have traveled in the TARDIS can remember them, because it takes you outside of time and changes your perception of  it.)
The Doctor seems both frightened and delighted with this new phenomenon that could consume the universe.
At episode’s end, after fending off a surprise romantic overture from the to-be-married the next day Amy Pond, the Time Lord suddenly realizes that his companion and her wedding date are inextricably linked to this menace, and hustles her into the TARDIS, just before the stroke of midnight.
A nice cliffhanger ending, even though the next episode “Vampires of Venice” wouldn’t appear to address the matter directly. Maybe the Doctor’s buying time.
I’ll tune in to find out.
DOCTOR WHO: Time of the Angels / Flesh and Stone (2010)
The Doctor: Matt Smith
Amy Pond: Karen Gillan
River Song: Alex Kingston
Father Octavian: Iain Glen
Directed by Adam Smith
Written by Steven Moffat
May 16, 2010

BBC, DOCTOR WHO, DOCTOR WHO: TIME OF THE ANGLES, DR. WHO: FLESH AND STONE