Something new and unexpected has landed in theaters this summer – a film dealing with apartheid, internment camps, abortion, cruel experimentation, and empathy for those completely different from us. It’s called DISTRICT 9. But none of that’s so new, you say? Well, that’s true as far as it goes, but here’s the kicker: the party being segregated or interned isn’t just from another race; it’s from another world. Those in question are so different from humans, in fact, that they’ve been saddled with the rather unflattering nickname of “Prawns,” because in some ways they resemble those little bottom-feeding crustaceans.
Even this concept ultimately isn’t all that new. It’s been tackled in well-loved science fiction storytelling within the likes of TWILIGHT ZONE, STAR TREK and PLANET OF THE APES. However, DISTRICT 9 approaches the subject matter a lot more bluntly – and grossly & more verbosely, I might add. I’ve never been a huge champion of the lesser attributes of the human race, but DISTRICT 9 seems even less of a fan. It pulls no punches and even makes us out to be quite unfeeling and horrid. One begins to wonder what value there is to us at all.
DISTRICT 9 is handled in a most intriguing manner. Most of it is shot documentary and cinema vérité style (and no, not in some gimmicky fashion, as I’ll go to my grave claiming CLOVERFIELD was), and its look is gritty, heavy. This is all done quite well and those interviewed on camera really do appear as though they were literally plucked off streets or out of villages and are answering legitimate questions and posing true points of view. I admired its raw, wound-opening aspect.
Peter Jackson (he’s connected to some movies involving a ring and one about a giant guerilla, I think) was the producer of this inventive and very modestly budgeted $30,000,000 tale and its director was an unknown South African by the name of Neill Blomkamp, expanded from his earlier short subject. Young Mr. Blomkamp has had a longer career in visual effects as a 3D animator than he has as a director. He also co-wrote the screenplay for DISTRICT 9, along with Terri Tatchell (whose only film credit is this one).
*Spoiler Alert*
It’s a clever premise—well executed—concerning an alien interplanetary vessel that somehow becomes marooned on our planet. The ship hovers over the city of Johannesburg, South Africa. At first no one knows what to make of it. Is it going to attack us? Has it come in peace? But after waiting three years with no activity whatsoever, it’s decide that we should attempt to cut our way in to see just what may be going on in there. We do get in, and we find the ship full of aliens that are by this time extremely malnourished and slowly dying off due to disease and unsanitary living conditions. It’s decided that we should take action to help in some way, so a district is set up to accommodate the beings from another world.
As viewers, we come on to the scene 20 + years after this. Earth is still—as always—struggling with its own important issues and in the midst of all this living conditions in District 9 have become deplorable. The “Prawns” are essentially living in junk piles, with huts manufactured out of whatever they can find lying around. And as things get worse for both them and us, many humans are beginning to resent the visitors from another world and are starting to get quite verbal about it.


Eventually, it’s decided that a private company called Multi-National United (MNU), will be given the authority to at least temporarily deal with the aliens while the world’s governments try to figure out what should be done in the long term. So a new district (10) is set up, and it becomes the task of one Wikus Van De Merwe (Sharlto Copley, who is better known as a South African producer, rather than an actor) to evict large numbers of the aliens from District 9 and prepare them to be moved to District 10. But the unwitting man winds up getting infected by some alien “juice” and finds that his DNA is being altered; he’s becoming one of the aliens!
Well, his own people are in a panic over his possible infectious state, while MNU decides that he may be an invaluable link between our species and that of the “Prawns.” For one thing, we’ve managed to confiscate a slew of alien weaponry, but we cannot test or use it because it requires an alien DNA match in order to work. So now Wikus is a hunted man by lots of folks and he eventually seeks refuge within District 9 while he tries to figure a way to reverse his current state and return to his beloved wife. Of course, he also begins to empathize a bit with life on the other side of the fence surrounding District 9.
The story is handled in a refreshing manner and has many merits. However, I did walk away with the sense that it felt a bit long and a tad tedious at times. I found it more interesting earlier on, when it was asking questions and wanted to explore its situation. As the film progressed it transformed into more of a man-on-the-run tale with the f-word and bodily fluids constantly being thrown all over the place. (I know what you’re thinking, and no, I’m not a prude.)
However, what I personally wound up questioning were the courses that the story and certain characters wound up taking. I had trouble with the logic of various actions pursued. I couldn’t see why the humans and (advanced) aliens couldn’t—or wouldn’t—attempt to work together more in order to try to solve some of everyone’s current dilemmas. Part of this was explained away as the aliens in question merely being worker bee types and not of huge scientific acumen. Yet, with what I saw some of the aliens doing, this didn’t fully gel with me.
One of the reasons we were given that the aliens didn’t rebel in full was the fact that they had no weapons. Nonetheless, they built at least one sturdy robot of sorts that wound up being able to utilize several forms of built-in weaponry. But the only thing they did with it was trade it to some nasty Nigerian gangsters for cat food (their food of choice) within a black market type of setup. A couple aliens even spent twenty years cultivating the “juice” that would allow them to return to their home world.
By the way, we eventually get to see some of the alien weapons in action, but I couldn’t help asking myself why a race as advanced from us as these creatures obviously were would design such a messy, gory way of disposing of one’s enemy in the midst of close combat. I would think they’d come up with a way to disintegrate, rather than, well, splatter. It’s fun to watch and makes us go “eeeewww!” – but a practical for a highly advanced species?
I also had questions concerning several choices our lead human made (just what did he think he was going to be able to do with that ship he hijacks anyway?). I don’t want to mention any more of what he or anyone else does, however, because I do not wish to spoil things more than I already have. You’ll probably spot the moments I’m referring to once you see the film anyway.
The cruelty with which various tests were being perpetrated by humans disturbed me as well. Seeing no reason behind some of it is what troubled me. For instance, preparing to cut open an individual while he was fully awake and not even attempting to sedate him in any way, shape, or form made me think more of SAW than science fiction. Things like this and splatter guns seemed more fitting for exploitation than cerebral filmmaking, which is what I was hoping to see a little bit more of here.
I’m sorry if I’m spoiling most everybody’s happiness with DISTRICT 9. But these are some of the thoughts I couldn’t keep from flitting through my head. Still, with reservations illuminated, it’s a very interesting and unique approach to the science fiction genre and is certainly one of the better films of the year. I was actually quite intrigued with the alien named Christopher and his son. It would have been absorbing to see the story engage them more, rather than Wikus. But then again, that’s not particularly what the film was meant to be about. Regardless, there was plenty to keep one quite compelled.
Heck, it was worth the artists making the film just so we could have access to its various wicked movie posters. And one thing’s for sure – the next time I go to eat a prawn I’m going to look at it in a whole new light. 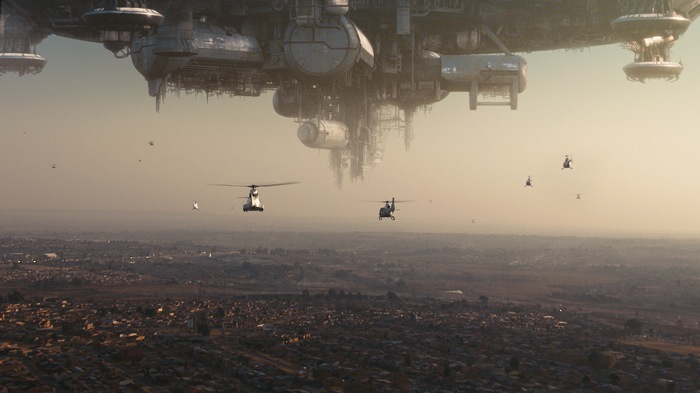