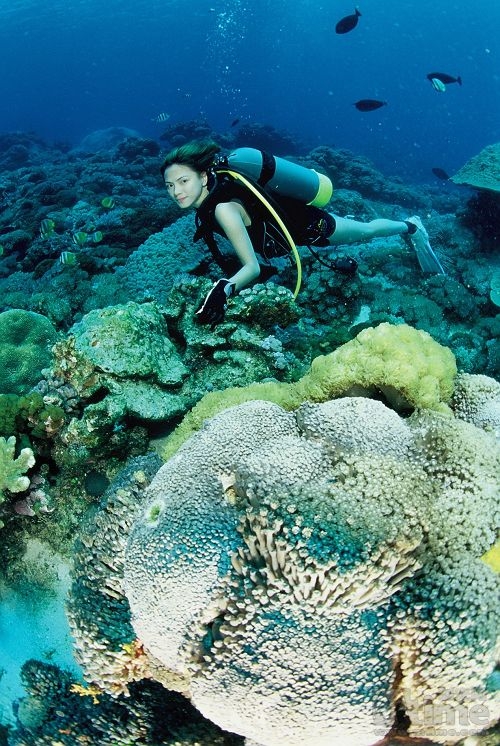 CCTV.com brings us news of Hong Kong filmmaker Tsui Hark’s latest film, MISSING, which is described as a combination of romance and horror, vaguely akin to GHOST. It’s about an underwater photographer who mysteriously disappears. His psycho sister begins tormenting his fiance, but his ghost intervenes to protect the bereaved woman. According to Liu Fang:

The first half of the flick is rife with horror and suspense. In its latter scenes the horrific elements are set aside, and the story becomes moving.
Tsui’s film emphasizes the psychological stress on the characters as the action unfolds.
Tsui started shooting “Missing” three years ago. He was inspired by a documentary about an ancient sunken city. The city is located at Yonaguini Island, at the westernmost tip of Japan. The 10,000 year old city was unknown to the world until its ruins were found by a diver in 1986. The ruins also touched Tsui’s environmental spirit.
[…]
Although the film is categorized as “horror”, many people coming out of theaters said horror-flick fans are likely to be disappointed. But people who like love stories would think it was wonderful – as long as they survived the horror scenes at the beginning.

It’s always nice to know that Hark is up to something new. In the ’80s and ’90s, he produced and/or directed a string of widly entertaining films, including many fantasy efforts: ZU, WARRIORS OF THE MAGIC MOUNTAIN; A CHINESE GHOST STORY; GREEN SNAKE; THE SWORDSMAN. Unfortunately, his work in the new millennium has not been up to par: Tsui Hark’s VAMPIRE HUNTERS was a disappointment, and ZU WARRIORS (a remake of the older ZU film) was virtually unwatchable. (By way of comparison, THE FORBIDDEN KINGDOM, which plays like an American knock-off of a Tsui Hark production, was much better than the ZU remake.)
Hopefully, MISSING will find Hark back on track.