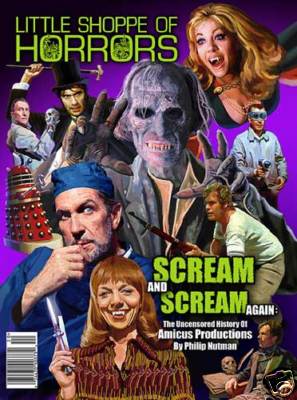 Keith Brown of Giallo Fever reviews an extra special issue of Little Shop of Horrors: the mgazine, devoted to British Gothic cinema, has published an issue titled “Scream and Scream Again: The Uncensored History of Amicus Productions.” Amicus, of course, was the major rival to Hammer Films when it came to churning out colorful, entertaining horror films in the 1960s and ’70s. They even used much of the same talent, both behind and before the camera (directors Roy Ward Baker and Freddie Francis, actors Christopher Lee and Peter Cushing), but their films were distinctly different. Whereas Hammer focused on Gothic Horror, usually set in the Victorian Era, Amicus tended to set their stories in modern day; Hammer focused on stories of Good and Evil, in which Good usually won; Amicus opted for irony, in which wicked the audience was asked to identify with wicked characters who inevitably brought about their own destruction. Amicus also became famous for the anthology format, taking four or five short stories and wrapping them together with some kind of linking narrative – a structure they used in several films, including adaptations of the comic books TALES FROM THE CRYPT and THE VAULT OF HORROR.
There have been one or two, unsatisfying efforts to document the history of Amicus, hampered by the fact that the two men who made the company, Milton Subotsky and Max J. Rosenberg had an acrimonious falling out. Subotsky died in 1992, Rosenberg in 2004, so now the story can be told without fear of litigation. Brown is pleased with the result, reporting that author Philip Nutman…

…succeeds in producing a work which will prove extremely useful as a reference guide (which one of those anthology films featured that story with that actor being the perennial question here?); for fans of trivia (the impressive main set in The Skull first saw service, albeit briefly, in Darling); as a source of quotes from the two men and figures like Freddie Francis, and for anyone just wanting to know more about the history of British horror and independent film production in the period from the mid-1950s to mid-1970s.

CFQ’s own Lawrence French previously vouched for this issue here.