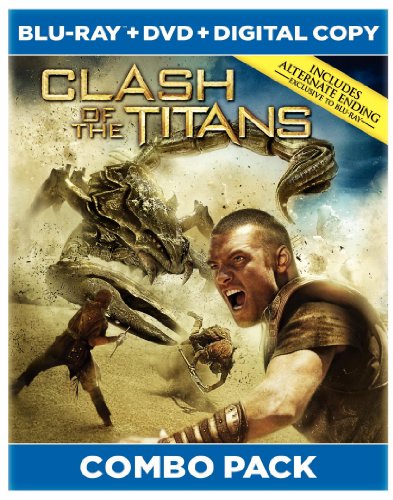 The transfer of the film onto Blu-ray is excellent, and the interactive exploration of the behind-the-scenes experience is more interesting than the film itself.

I will likely be pilloried for stating that I consider Ray Harryhausen’s version of CLASH OF THE TITANS to be one of his lesser films (down there with THREE WORLDS OF GULLIVER). I am not sure if his intention was to do a sequel to JASON AND THE ARGONAUTS or what, but at the beginning of a decade when effects went into hyperdrive, I found it a weak note on which to finish his career.
Needless to say I was less than enthusiastic when Warners announced they were doing a high-budget remake. I think my reaction at the time was “Why?” Fortunately, the new version has lots of redeeming qualities: a great cast, a thin but engaging story, state of the art special effects, and competent direction. Best of all is an economical running time during which the action just seems to rip along. I was also fortunate enough to see the new CLASH OF THE TITANS in 2D in the theater (not with the much-criticized post-production 3-D face-lift).
The transfer of the film onto Blu-ray is excellent as you would expect. The HD picture quality and surround sound are stunning, bringing the movie theater experience to the living room. Although the DVD version is a bare bones release with minimal extras (deleted scenes anyone?), the Blu-ray offers up a Maximum Movie Mode feature that allows us to explore the entire filmmaking process in one window while the film plays in an another. Instead of a simple narrated audio commentary, this format offers a truly interactive experience that I found more interesting than the film itself. We get to see CLASH OF THE TITANS as it evolves through the hands of the director Louis Leterrier (THE INCREDIBLE HULK), his art director and effects team, and finally the cast.


Watching the MMM version is worth it just for the scenes of Leterrier directing while dressed in a hooded green screen costume and acting the part of the Kraken. I was also impressed with the design of the film; the epic scale of the story is captured using large sets and panoramic scenery instead of just green screen and CGI.
As impressive as the MMM feature is it still does not answer some of the fundamental questions that CLASH OF THE TITANS raises, specifically why the humans had declared war on the gods in the first place.
Apparently, CLASH OF THE TITANS did so well at the box office that Warners is developing a sequel, though I can’t imagine where they will take the characters next (I suggest Hawaii and a surfing motif). However, it is good news for Sam Worthington (AVATAR, TERMINATOR: SALVATION), who now has three major franchises to keep him busy for the foreseeable future.
[serialposts]