Fine technical craftsmanship and solid performances fight a losing battle with rampant stupidity in this entertaining Mexican horror film, which is alternately atmospheric and silly. The story follows a reporter named Ricardo (played by the film’s producer, Abel Salazar) who comes to a small town seeking an interview from Samuel (Enrique Rambal), a world-famous pianist who inexplicably abandoned the concert stage. Ricardo arrives in town just in time to find a blond woman who has been gored to death by some kind of monster inside the house where the pianist lives with his mother Cornelia (Ofelia Guilmain) and his young pupil Laura (Martha Roth). Despite the fact that the locals seem to have a superstitious dread of the place, the police see no reason to make any connection between the dead woman and Samuel. Ricardo makes little headway into the mystery, but a flashback eventually reveals that Samuel offered his soul to the Devil in exchange for becoming the world’s greatest pianist. He then killed his rival Alejandra (also Roth) and keeps her body locked in the closet of his paino room. There is a catch, however; when Samuel plays the piano, he turns into a hairy monster.
The film gets off to a good start with the death of the blond motorist and Ricardo’s arrival. His unwelcome reception at Samuel’s hacienda sets up the foreboding tone, and there is a pretty decent mystery concerning exactly what is going on behind the scenes. The element of classical music suggests higher aspirations for the film (which initially resembles a drama with supernatural overtones), and the flashback has an interesting, almost impressionistic look with a few simple angles and beams used to suggest the back stage setting where Samuel jealousy of Alejandra inspires him to his demonic bargain. The murder of Alejandra is handled with effective suspense, but after that the film heads down hill, thanks to some bad makeup and a confused screenplay that tosses in random elements with barely even any cursory logic.

The first point of confusion regards the black cat that mysteriously shows up after Samuel sells his soul. On one hand, the animal seems to be a Satanic familiar, signaling Samuel’s deal with the Devil; on the other hand, the frisky feline seems aligned with Samuel’s disapproving mother (Ofelia Guilmain), acting as a sort of “canary in a coal mine” to warn of her son’s Faustian bargain. The cat repeatedly leaps from her arms like an Olympic pole-vaulter when Samuel appears. (The effect is unintentionally hilarious: not only is it horribly melodramatic; it is also a bit too obvious that the animal actor has been rigged to prod it into action – at one point you can see a vertical glint of light off a wire after the cat leaps). So is the cat Samuel’s evil ally, or is it an innocent creature that is afraid of his satanic aura? Adding to the confusion, on several occasions the inconsistent kitty remains indifferent to Samuel’s presence.
The next big problem is Samuel’s transformation into a monster. Frankly, the makeup – with a nose the size of Mount Everest – is ridiculous. (Are we really supposed to believe that Samuel can play expert piano with his hairy, taloned hands?) But the real problem is on a story level. The transformation is supposed to be the Devil’s little joke at Samuel’s expense: he is now the best in the world, but he can never play in front of an audience without revealing his evil secret. The question arises: How did he earn such a grand reputation that Ricardo would bother to come looking for him?
The transformation is further muddled by the film’s uncertainty about whether Samuel is possessed. He has black-outs and occasionally talks about himself in the third person, implying that the Devil is guiding his actions, but these black-outs do not conform to his transformation into a monster, which takes place only when he plays the piano. (Oh no, wait: the ending contradicts that: Samuel also transforms when Laura plays the mysterious piece of music that showed up on Alejandra’s piano after Samuel struck his bargain.) The plot has Samuel hoping to redeem himself by tutoring Laura (working on the theory that he will give back to the world what he took away, a great woman pianist), but in Monster form Samuel wants to kill her – implying either that he is possessed or that he has an alter ego a la Mr. Hyde. But the first time he transforms he is not even aware of the change, and greets his mother as if nothing had happened.
Confused yet? The impression one gets is that the writers were throwing in anything they could think of, hoping it would all add up to an intoxicating cocktail, but they never bothered to worry about whether the ingredients actually mixed. Fortunately, the film sustains itself largely extent thanks to the craftsmanship lavished on the screwy screenplay. The sets are lovely; the black-and-white photography is beautiful. Director Rafael Baledon does a good job staging the action and selecting camera angles to tell the story. The music score – including paino excerpts by Tchaikovsky – is effective, and the transition to the mysterious “demonic” music is smoothly handled (which is to say that the listener does not realize that he is suddenly listening to something grossly inferior to Tchaikovsky). One touch that is particularly nice – because it is never referenced in the dialogue, leaving us to draw our own conclusions – is that the written score for this music resembles a negative image of the traditional sheet music: white notes written on black paper.
Guilmain and Rambal are perfect as the mother and son with a guilty secret in the past. Their relationship is interesting but odd. She obviously disapproves of what her son has become, and yet she shields him from the prying reporter. Salazar aquits himself so well in this role that you can forgive him for casting himself. Only Martha Roth seems a bit weak in the dual role of Laura and Alejandra: she fits the mold of a pretty horror movie heroine, but she never quite convinces us that she is talented enough to be an accomplished pianist.
In spite of everything, THE MAN AND THE MONSTER remains interesting until the end, if only because you get the feeling that there is a good movie hiding in there somewhere: the one about the reclusive man living with his mother after killing a beautiful woman because she was more talented than he – maybe with the satanic overtones intact but definitely without the ridiculous monster makeup. Fans of Mexican horror may find this of interest, thanks to the presence of the prolific producer-star Abel Salazar, but the only other viewers of interest would be those looking for the origins of the infamous Spring-Loaded Cat.
Besides constantly leaping from Ofelia’s arms, the unnamed feline comes pretty close to being the first to perform this over-used horror cliche (in which someone opens a door and receives a jump-scare from a cat that leaps out, as if spring-loaded). The kitty’s historic moment comes when the reporter leads the police to a room where he found Alejandra’s body. Opening the door, he reveals only the cat, which pauses a moment, then leaps out and runs away. The delayed action cannot quite be considered “spring-loaded,” but this is clearly a prototype of many scenes to come.

Casa Negra’s DVD of THE MAN AND THE MONSTER offers options for both English language and Spanish language. This is not a matter of alternate audio tracks; choosing one or the other determines the language of the menu options and whether you see the film with or without the English subtitles (no dubbing is available – the film had been edited and dubbed when released in the U.S. during the ’60s, but only the original uncut version is included on the disc).
Picture and sound, restored from vaults elements, are in good shape. The only bonus features are a cheesy radio spot, cast biographies, and a gallery slideshow of poster art from Mexican horror movies. The latter is quite interesting, if only because of the colorful art and titles are not as overly familiar as the English-language horror classics so well known to fans. 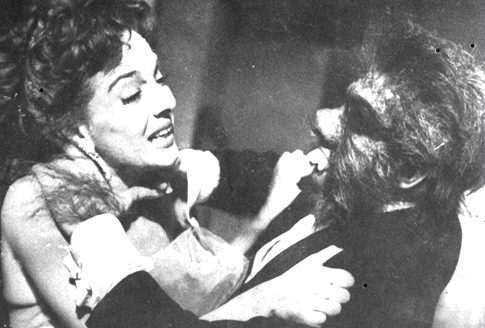