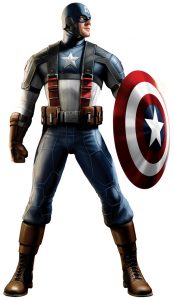 Looks like images posted at Ain’t It Cool News of Chris Evans’ costume for CAPTAIN AMERICA might actually be the real deal.
Seems to be inspired in part by the Ultimates Capt. America costume. (Click pic for larger version)
I think they missed a very obvious choice; rather than two red straps, they could have made the red & white stripes of the costume armor plates, sewn together under impact-resistant fabric for flexibility—just like real bullet-proof vests.  And what’s with the BROWN boots and gloves, the fillmmakers have never seen Red or at least “Oxblood” shoe polish, which was quite popular in the WWII time-frame?
The design reminds me of an armored-up version of the 1944

Republic serial C.A. costume, in which Cap went without wings on his cowl, and caried a gun.  In that fim,  Captain America was not  ‘super-soldier’ Steve Rogers, but instead frustated with red-tape District Attorney Grant Gardner (Dick Purcell).
Could be a lot worse, though. The good Captain has never had good luck on the silver screen.
On TV in 1979, the producers changed the costume  and “improved” the character into Evel Knievel on steriods—a tactic that subverted the Living Legend in to a figure of tacky triviality that seemed more like sabotage than adaptation.
Witness poor Reb Brown below:

He even LOOKS a little embarrassed.
Hollywood seems to have a fear of costumed superheroes and larger-than-life characters and storylines. Often, the creatives there appear to need to either turn them into camp or satire, or choose to water them down into mundane shadows of their four-color originals.
Of course, even when they get Captain America’s costume right from a basic design standpoint, the execution of the costume (and movie) can be disappointing, as we can see from Cannon’s barely-released  CAPTAIN AMERICA (1990). 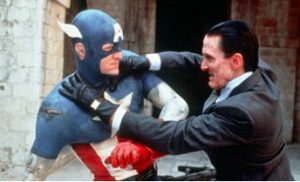 So, I can’t complain too much about the costume changes for director Joe Johnston and Marvel Studio’s CAPTAIN AMERICA: THE FIRST AVENGER.
One can hope at least that their hearts are in the right place to do justice to the comic book icon.