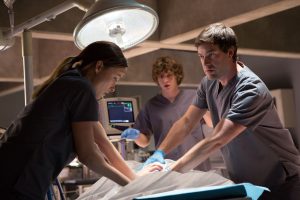 THE LAZARUS EFFECT is quite an effective little horror chiller, that benefits greatly by treating it’s subject–a group of scientists exploring the possibility of bringing the dead back to life–with deadly seriousness. The movie follows two romantically involved researchers, Frank (Mark Duplass) and his fiancée Zoe (Olivia Wilde), who are operating with a grant from a Berkeley University, where they experiment with bringing recently deceased animals back to life. Just as they succeed in bringing a dog back to life–like the hapless Dr. Frankenstein–their project is halted in it’s tracks. Not by angry villagers, but by a biotech company, who seize all their research materials for there own corporate use.
What makes the film especially fascinating, is that it delves into metaphysical discussions about what actually may happen after death, with Frank taking a more scientific and atheistic point of view, vs. Zoe who brings a more traditional theological bent to their conjectures.
It’s also what attracted director David Gelb to the project, who said, “I loved the idea of really exploring the concept of being brought back to life. What would you experience while you were gone? How would you be different when you came back? And what might you potentially bring back with you? The young scientists in our film set out to give patients and loved ones hope, but they discover that there can be horrible consequences to playing with the power of life. As events begin to unfold, the story takes a sharp turn into becoming an absolutely terrifying thrill ride where you don’t know what’s going to happen, you don’t know who the next character to disappear is going to be, and the scares are pretty intense.”
Indeed, it takes nearly half way into the film before we get any inkling about who might suddenly die, so they can conveniently be brought back to life. Of course, it won’t be a shock if you’ve seen the poster or the trailer (and I had not), so for me, it did add a bit more suspense to the first 30 minutes of the picture, while the basic premise is being developed.
Like any good FRANKENSTEIN movie, the subject of life after death is one of endless fascination, which is also the basis for movies like BRAINSTORM and WHAT DREAMS MAY COME. In fact, rather strangely, the same weekend THE LAZARUS EFFECT opens, director John Boorman also talked about the subject when he was in San Francisco for the opening of his own delightful new picture, QUEEN AND COUNTRY.
When asked if QUEEN AND CONTRY might be his last film Mr. Boorman replied, “Yes, you saw the little signal in the last shot of the film. The camera stops. That was my little signal. I’m 82, so it’s high time I stopped. It’s high time I died, actually. I don’t want to be still working at 104!”
However, when pressed, Mr. Boorman admitted he does have a script he still would like to make, also about life after death. “It’s called HALFWAY HOUSE,” explained Boorman, “and there are some people who are encouraging me to do it. It’s about a man whose wife commits suicide and he has a recurring dream in which he visits a kind of clearing house where people go after they die. They are given a video of their entire life, and before they can move on, they must edit it down to three hours of highlights! If I live long enough and I’m strong enough, maybe I will make it.”