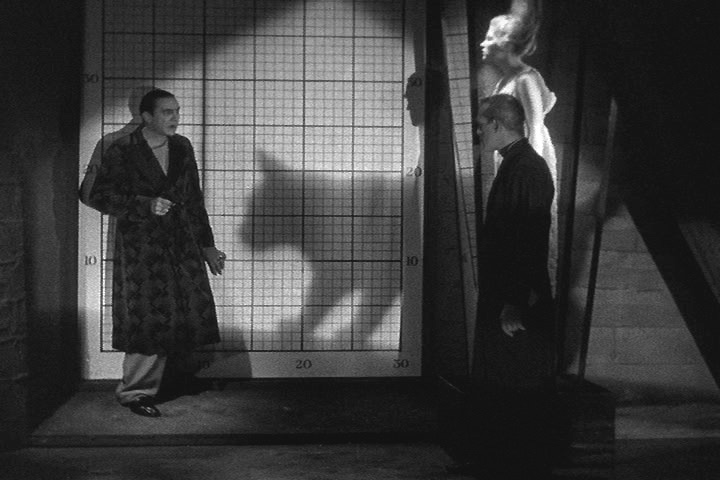 No monsters but lots of atmosphere, this is a classic of the genre.

Eschewing many standard genre elements of its era, THE BLACK CAT is barely a horror film in the traditional sense, and it has even less to do with Poe than 1932’s MURDERS IN THE RUE MORGUE (which had also starred Lugosi). Nevertheless, this original scenario concocted by director Ulmer and writer Ruric is more than strong enough to earn this film a berth among the 100 Best Horror Films Ever Made.
Set mostly in a “House of Doom,” (the film’s title in England), which was built by an architect on the ruins of the fortress he sold out to the enemy during the First World War, the film has a very contemporary air, thanks to its (for the time) futuristic set design. Although not much actually happens, a subtle aura of perversity imbues the abode with an intangible but palpable horror, much like Poe’s “The Fall of the House of Usher.” (The overseas title hints at this connection.)
Conceiving the picture in an effort to capitalize on the success of DRACULA and FRANKENSTEIN (both 1931), Universal Pictures pitted their reigning Kings of Horror, Bela Lugosi and Boris Karloff, against each other in a battle of the Terror Titans. The story is basically a revenge tale, with Lugosi as Vitus Verdegast, returning to avenge himself on the architect (Karloff) who betrayed him and countless others during the war, and then married Verdegast’s wife (and later his daughter, too!) while Verdegast was being tortured in a prisoner of war camp.
Karloff, whose most famous horror role (as Frankenstein’s monster) was laced with patho, is excellently sinister here as the unrepentant and totally evil Satanist (who keeps his dead wives on display in glass cases in his basement). David Manners (an old hand at this kind of thing, since appearing in DRACULA and THE MUMMY) and Jaqueline Wells provide solid support as the innocent, honeymooning couple caught up in the conflict.
But the real coup lies in casting Lugosi as the nominal hero, which yields wonderful results, because his character is as unhinged as the villain. Locked in mortal combat, the only thing that separates him from his adversary is that he still has some concern for the innocent victims caught in the crossfire. Other than that, we are asked to identify with him, even as he finally loses all restraint and flays his tormentor alive!
Some elements are thrown in more or less gratuitously. Poe`s feline shows up long enough to justify the film’s American title and to help explain Verdegast’s delayed vengeance (his phobic reaction prevents him from killing his enemy at a crucial point). Diabolism and mysticism are thrown in to secure the film’s place in the genre (Karloff’s character is also a practising Satanist.)
But mostly the film is about the mortal struggle of two characters past all normal human boundaries of pain and suffering. The real horror is that of souls gone dead because of real-life atrocities of World War One. (At one point, when the yound lead is unable to phone for help, Karloff cackles, “Did you hear that, Vitus? The phone is dead! Even the phone is dead!”) This is probably the first film to make a direct connection between the real horrors of that war and the imaginary horrors it inspired on the silver screen.
There are some flaws, many apparently due to post-production tinkering. In several cases, lines have obviously been dubbed to help the audience understand what’s happening. In some cases, long shots that were intended to play without dialogue have voices issuing from mouths that are not moving. In two brief cases, we hear different actors’ voices coming from Karloff or Lugosi.
Also, the film’s almost operatic approach sometimes seems a bit heavy-handed. The music score (patched together from classical pieces) underlines the action with no pretense of subtlety, blaring ominously whenever Karloff enters a scene. There’s even an amusing moment in the second half of the film when two officials show up to ask some questions: even before they open their mouths, the music lets us know they’re on hand to provide some comic relief (they get into a pointless argument about which of their hometowns the honeymooning couple should visit).
But these minor flaws are trivial compared to the overall effectiveness. With no monster and little conventional suspense, this is nevertheless an extremely unusual and effective horror film that seeks to disturb on a deeper level. The music score may be a bit overemphatic for today’s viewers; otherwise, director Edgar G. Ulmer`s film is a perverse classic, tinged with hints of taboo subjects (necrophilia, incest) that still evoke a chill.
THE BLACK CAT (a.k.a. HOUSE OF DOOM, 1934). Directed by Edgar G. Ulmer. Screenplay by Peter Ruric; screen story by Ruric & Ulmer, suggested by the Edgar Allan Poe tale. Cast: Boris Karloff, Bela Lugosi, David Manners, Jacqueline Wells, Lucille Lund.