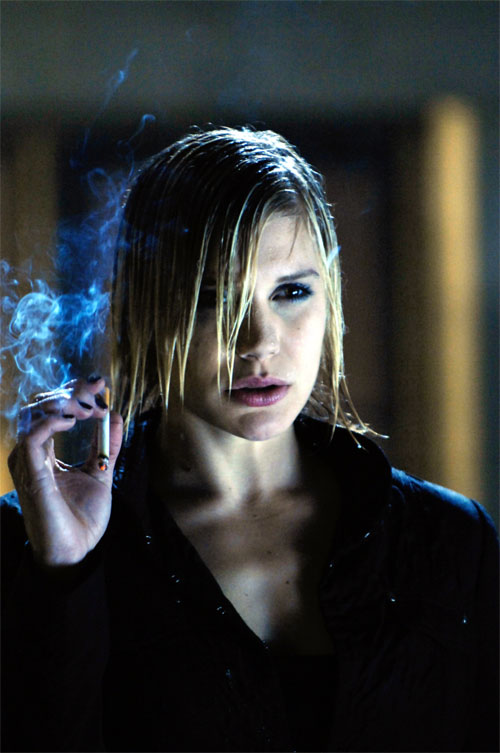 In its third week, BIONIC WOMAN continues its dizzying descent after its promising pilot. New exposition seeks to undermine our understanding of what has gone before; the attempt at complexity does not cast revealing light on previous details; it simply contradicts them. The impression one receives is that the show is being rewritten as it goes along, revising the premise in order to head in a new direction. The ill-conceived stumbling in already murky waters merely kicks up more mud, obscuring rather than clarifying, in the hope of fooling the audience into thinking something profound is hiding in the darkness.
The new story has Jamie Sommers (Michelle Ryan) assigned to bodyguard a rich man’s daughter, but the real plot engine driving the episode is rogue bionic woman Sarah Corvis (Katee Sackhoff). Previously, we knew she was mentally unbalanced by her powers; now she seems to be physically suffering as well. Egged on by villainous Anthony Andros (Mark Sheppard), Sarah seeks out Jamie and tries to convince her to submit to surgery that will help Andros update Sarah’s technology and possibly save her life.
Needless to say, it is impossible to believe that Jamie would have anything to do with Sarah, whose body count includes Jamie’s fiance and her unborn child. Nevertheless, the episode insists on having Jamie at least consider the proposition. The attempt at turning enemies into potential allies is woefully unconvincing. Shifting alliances are not dramatically impossible (see THE GOOD, THE BAD, AND THE UGLY), but they work best when the motivations are clear and we see the advantage to both parties to make the switch. Neither is the case here.


The closest the episode comes is having Sarah help Jamie defend her young charge from some would-be assassins. Sarah’s timing is so impeccably perfect that a reasonable viewer would wonder who she managed to show up just before the killers. In an episode desperately trying to sow distrust against the nominal good guys (including Jamie’s dead fiance), it never occurs to our heroine that maybe – just maybe – Sarah might have, you know, staged this whole attack just to earn brownie points by helping out at the crucial moment.
The on-going relationship between Jamie and Sarah is wearing out its welcome, because it is pushing too hard, too fast. (One suspects the show should be re-titled BIONIC WOMEN.) In one climactic moment, Jamie dissuades Sarah from harming an innocent victim by making an appeal to her better nature. This kind of dramatic ploy might work at the end of the season, in order to leave a new angle open for season two, but it is way too early now. (How many years did it take Batman to try reasoning with the Joker in The Killing Joke? Even Darth Vader didn’t get redeemed until the end of RETURN OF THE JEDI.)
Other questions remain unanswered. Last episode, Jae Kim (Will Yun Lee) resumed his romantic relationship with Sarah, but this week he is still training Jamie to defeat Sarah. Does he feel a bit conflicted about this? Do any of his colleagues suspect something may be up with him? Don’t ask – the episode ignores the plot complication entirely.
The special effects are also showing signs of overreaching. We get an execrable computer-generated shot of Sarah jumping from one building to another, which looks like a cut-out animated figure. In future, the show should stick to live-action effects.
There are a few moments that suggest the show still has potential, if it can straighten itself out. The clear highlight features Miguel Ferrer as Jamie’s boss, Jonas Bledsoe, who is seen making a heart-felt declaration of love to a subordinate, only for the scene to reveal that he is testing – and beating – a polygraph machine. In a show that is stumbling over attempts at humor (revovling around Jamie’s attempts to maintain a normal family life with her younger sister while occasionally kicking bad-guy ass), this is one moment that actually generates a real laugh.