According to The Hollywood Reporter, Marvel Studios is in negotiations with Jeremy Renner (28 WEEKS LATER, THE HURT LOCKER) to play the role of Hawkeye in THE AVENGERS.
Marvel’s interest in the actor is not news, online sources have mentioned the rumors since last fall, the piece notes.
Hawkeye is the purple & blue-clad Clint Barton, master bowman, simliar to DC’s Green Arrow. Though not a founding member of the group, Hawkeye — a misguided villain-turned-hero — actually joined The Avengers fairly early in the book’s run. (Avengers #16, 1965)
THR believes the Joss Whedon-helmed film will feature Iron Man (Robert Downey Jr.), War Machine (Don Cheadle), The Black Widow (Scarlett Johansson) Thor (Chris Hemsworth), Captain America (Chris Evans), and Nick Fury (Samuel L. Jackson).
Having War Machine AND Iron Man seems redundant, as they’re both guys is different colored high-tech armor. Perhaps Tony Stark will be an advisor, as suggested in IRON MAN 2, and not suit up until the final battle.
The Hulk may appear, though no deal with Ed Norton is known to be in place. Since the Hulk is essentially a CGI character, it may not be necessary to see his alter-ego Bruce Banner in THE AVENGERS.
In other Marvel movie casting news, Neal McDonough (TIN MAN) 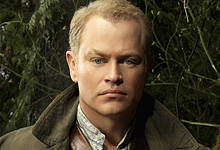 is said to be in talks for the role of “Dum Dum” Dugan For CAPTAIN AMERICA: The First Avenger.
Dugan was the red-haired, handlebar mustache-sporting, bowler hat-wearing right hand man of Nick Fury’s WWII ‘Howling Commandos’ in the comics.
How the film with handle any time period/continuity troubles is anybody’s guess, at this point.