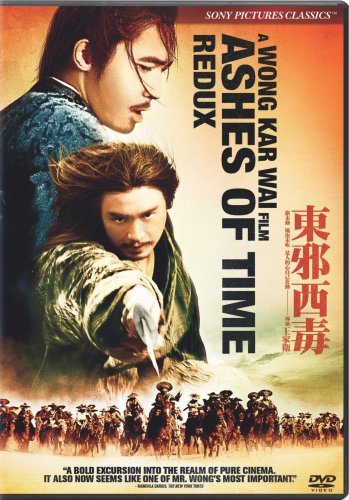 Shot in 1992 but not released until 1994, ASHES OF TIME was re-edited and partially re-scored for a brief 2008 theatrical release under the title ASHES OF TIME REDUX . In either its original or revised form, Wong Kar Wai’s free adaptation of Louis Cha’s novel Eagle Shooting Heroes resembles a high-flying martial arts fantasy film (a la ZU WARRIORS, FORBIDDEN KINGDOM or CROUCHING TIGER, HIDDEN DRAGON), but the fantasy element is minimal. There is a magic wine that supposedly makes the drinker forget his past, and also a brief scene of a character displaying some magical martial arts skills (tracing her blade across the surface of a lake causes an explosive blast of water – footage prominently featured in the trailer); by and large, however, the action remains earthbound. And being a Wong Kar Wai Film, ASHES OF TIME is more of an auteur effort than a genre piece, refusing to provide the fun and excitement one expects from this sort of thing, focusing instead on the drama, which is rendered in long slow passages of people speaking mournfully or staring off into the distance.

The new Sony Pictures Classics’ DVD presents the REDUX version with beautiful picture and audio quality that captures the film’s memorable imagery. The aspect ratio is 1.71. There are two audio tracks, Cantonese and French 5.1 (Dolby Digital), with optional English subtitles.Bonus features consist of a trailer, a brief behind-the-scenes piece, and an interview with Wong Kar Wai.

The behind-the-scenes featurette, titled “Born from the Ashes: The Making of ASHES OF TIME REDUX,” is mostly a promotional piece, consisting of brief interview snippets with Wong Kar Wai and some of the cast discussing the film in superficial detail. Considering the brief running time, a bit too much footage from the film itself is front-loaded onto the featurette – time that could have been spent giving us more details about the making of the movie.

The Question-and-Answer session with Wong Kar Wai, conducted by J. Hoberman the day after a festival screening of the film, is much more informative. The filmmakers discusses not only ASHES OF TIME but also his career as a whole. Of course, the most interesting parts concern the REDUX version: Why go back and re-edit the film? Wong Kar Wai’s answer (much fuller than that given in “Born from the Ashes”) is the lab where the film was stored went bankrupt; when the materials were retrieved, many of them were in bad shape. After retrieving other available materials from overseas distributors, Wong Kar Wai determined that some portions of the 1994 cut, especially the soundtrack, could not be restored, so he opted to assemble a new version, with additional musical contributions from cellist Yo-Yo Ma.

For someone who is not a native English speaker, Wong Kar Wai gives a very good interview in English, speaking in detail about his work. (For example, his approach to screenwriting is to provide only the most minimal, basic information necessary, leaving the details to be determined during the actual shooting.) Even if you are not a fan, you will find his comments interesting enough to makie you want to check out his other films.

Ultimately, ASHES OF TIME REDUX is of tangential interest to fans of cinefantastique;its true appeal is to fans of Wong Kar Wai. Those seeking a fanciful example of martial arts Fant-Asia cinema might be better off viewing EAGLE SHOOTING HEROES, the 1993 production that recycles much the same cast of characters (played by the same actors).