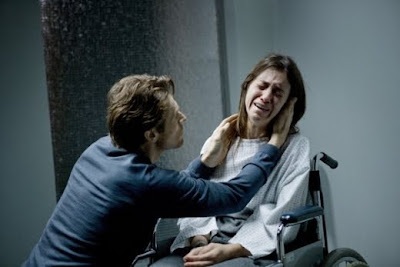 Lars Von Trier’s 2009 film ANTICHRIST is quite a work of art but after hearing so much about the film; I am surprised to say it isn’t at all what I’d expected. In fact I’m not sure this is a horror film at all – more a drama with some horror elements. Certainly a great piece of eye-candy, ANTICHRIST is entertaining, whilst being rather slow, and somewhat confusing.
The film opens with a stunningly beautiful and perfectly directed scene of our unnamed couple (Willem Dafoe and Charlotte Gainsbourg) making love. The passion is captured in graphic, slow motion, black and white, and in spite of the odd close-up shot of real sex (which is over very quickly) this is very tastefully done. Unfortunately for our couple, whilst they have their moment of ecstasy, their young son is climbing on the window ledge and falling several stories to the ground below.
Following the death of their son, the woman feels like she’s losing her mind and her husband, a psychotherapist, in spite of his own reservations, decides to treat her himself, whilst hiding his own grief he struggles to help her deal with hers. He takes her to a cabin in the wood to face her fears, and it is here that things go from bad to worse. Nature itself seems to be against them; even the acorns which fall constantly from the trees seem to have malevolence about them. The woman’s grief spirals out of control and only violent sex seems to pacify her. Her husband tries to talk her down, but spends a lot of time thrashing around naked with her.
It eventually becomes apparent that there is a reason for her behaviour, but I wasn’t convinced by this. Because of the title alone I had anticipated a bit of devilish involvement and all hell breaking loose, and though there are strange visitations by a deer, a crow and a very absurd fox, the devil doesn’t seem to be involved – whatever is happening to this couple isn’t powerful enough for the finger of suspicion to point at ol’ Beelzebub.
Eventually the wife completely loses it, and in a scene reminiscent of Stephen King’s Misery we are witness to a very bad case of spousal abuse!
The story is told in four chapters, as well as a prologue and an epilogue and the beautiful colours change from blues, through greens and browns, and it is this stylish and striking look of Antichrist which makes it special. Yes, the very real sex scenes are a talking point, and yes, the horrific violence is also worth a mention; however, both of these things are over very quickly, and it’s the beauty of the film that will remain etched on your brain after everything else has paled.
The two actors held my attention very well. One reason may have been their unusual looks – we all know Dafoe is a funny-looking man, but oddly, when Gainsbourg contorts her face in sorrow and anguish, she looks very similar to Dafoe! Strange looking or not, both actors were equally convincingly as they embraced each scene unflinchingly. Without them, ANTICHRIST might have been too strange to enjoy, but with them it is quite a compelling watch.
ANTICHRIST (2009). Director-Writer: Lars Von Trier. Cast: Willem Dafoe, Charlotte Gainsbourg.
[serialposts]